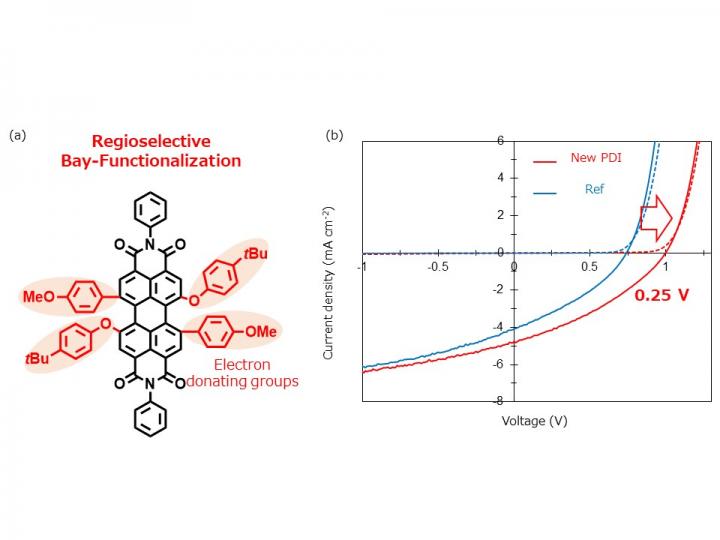 The power conversion efficiencies of organic solar cells (OSCs) based on blends of electron donor (D) and acceptor (A) semiconducting materials now exceed 16%. However, it is still lower than that of highly efficient inorganic SCs such as GaAs and perovskite. The charge generation efficiency in OSCs nowadays is nearly 100%, thus reducing the energy loss in output voltage is critically important for further enhancing the efficiency of OSCs.

Group of Assistant Professor Seiichiro Izawa and Professor Masahiro Hiramoto at Institute for Molecular Science and Professor Masaki Takahashi and Assistant Professor Keisuke Fujimoto at Shizuoka University in Japan report that regioselective bay-functionalization of perylene derivatives and the use of the synthesized PDI as an acceptor material reduces the open-circuit voltage loss in OSCs. PDI, a promising candidate as a superior non-fullerene acceptor material for OSCs, has attracted tremendous attention due to the highly efficient charge-carrier properties. However, it has been still difficult to synthesize custom-designed PDIs with high efficiency and desired regioselectivity. Reserchers developed regioselective bay-functionalization of PDI by using their original synthetic protocol of highly controllable monobromination of peryrene tetracarboxylate. The bay functionalization by electron donating groups lifted LUMO level of synthesized tetrasubstituted PDI (Fig. 1a). The use of the synthesized compound as an acceptor material of OSC increased open-circuit voltage as 0.25 V than non-substituted PDI (Fig. 1b). The origin of the high VOC was that bay-functionalization liftes LUMO level, leading to the reduction of the energy offset for charge separation and non-radiative recombination loss that is the most important topic in OSC field nowadays. The results will open up new aveneues for future development of potential PDI-based acceptor materials through the tailor-made synthesis of bay-functionalized PDIs for efficient OSCs.