Medical University of South Carolina researchers report that adding a compound to reduce inflammation to standard stroke treatment improves learning, memory and motor recovery and may extend the treatment window by reducing risk of hemorrhage 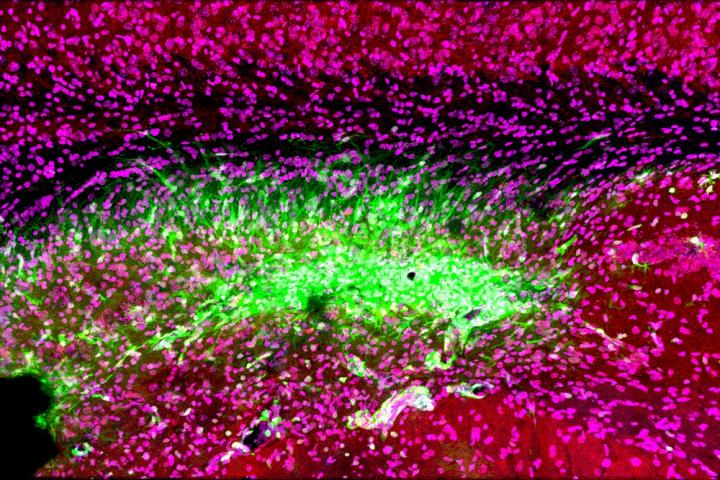 Reperfusion therapy, the gold standard for stroke treatment, helps restore blood flow after a stroke caused by a clot, preventing loss of brain tissue. However, only about 10% of stroke patients qualify, in part because of reperfusion therapy’s narrow treatment window.

A recent Medical University of South Carolina study suggests that this therapy could be both safer and more effective for both motor and cognitive recovery if administered with a specialized compound that blocks the immune response. The team’s preclinical findings, reported in the cover article of the May 13 Journal of Neuroscience, suggest that reducing the immune response in the brain could be a strategy for improving cognitive recovery. It could also extend the treatment window for therapy, allowing stroke specialists to help many more stroke patients.

“With reperfusion therapy, we’re restoring the blood flow, which is necessary to save the tissue, but there is an ongoing inflammatory response by the immune system that is not targeted by reperfusion,” said Stephen Tomlinson, Ph.D., interim chair of the Department of Microbiology and Immunology at MUSC and senior author of the article.

This could explain why, though mechanical reperfusion has a success rate of 90% in returning blood flow to the brain, only about 40% of treated patients recover enough motor and reasoning skills within three months to tend to their daily needs independently. Even those who do recover motor function can still struggle with cognitive challenges months later.

“I’ve seen patients who have barely any motor deficits at follow-up, but they’re really struggling in their daily life in terms of memory, behavioral consequences and language,” said lead author Ali Alawieh, M.D., Ph.D., who completed his graduate studies at MUSC and is now a resident in neurosurgery at Emory University School of Medicine.

Tomlinson and Alawieh think the immune response in the brain is the culprit.

During a stroke, the oxygen and energy supply to the brain is cut off by a clot, causing brain tissue to become stressed and die rapidly.

Just as it is with a cut to the knee, the immune system is activated to heal the wound, which includes clearing the dead tissue.

A family of special immune proteins called complement proteins help to guide and promote this immune response in the damaged areas.

In a 2018 article in Science Translational Medicine, Tomlinson and Alawieh showed that these complement proteins flagged both dead tissue and stressed brain cells for removal.

The stressed brain cells were not yet dead, only damaged by lack of oxygen and energy. As the goal of stroke treatment is to save as much brain tissue as possible to lessen overall damage, this was a concerning result, as it meant salvageable tissue was being destroyed by the immune system.

Therefore, Tomlinson and his team developed a complement protein blocker, named B4Crry, which acts only at the site of stroke injury. This compound blinds the complement proteins to the signals of stressed brain cells, saving the stressed tissue and reducing overall brain damage in a preclinical stroke model.

As Tomlinson’s team expected, reperfusion therapy alone did improve recovery of coordinated movements such as walking in a preclinical model of stroke. With the addition of B4Crry to treatment, coordinated movement improved even faster, with greater recovery seen as early as three days after the stroke.

The improvements to learning and memory were even greater than those seen with motor functions.

Tomlinson’s team further probed into why the addition of B4Crry, and the subsequent reduction of the brain’s immune response, aided cognitive recovery so greatly.

A complement inhibitor such as B4Crry might also help stroke specialists overcome the biggest hurdle for reperfusion therapy: the short treatment window.

Tomlinson’s team showed that after clot removal adding B4Crry to reperfusion therapy reduced the potential for hemorrhage, or excessive bleeding, even with treatment given up to six hours after the stroke. These findings suggest that complement inhibition could not only make reperfusion therapy safer but extend its treatment window, making it available for many more stroke patients.

Alawieh is excited about the future use of complement inhibition in the clinic.

“Our next step is to see how complement inhibitors work with comorbidities, such as old age, smoking and diabetes, in a preclinical study,” he explained. “Collectively, this information will help us design the best clinical trial when we move to humans.”

Tomlinson’s team at MUSC is also testing the potential for complement inhibitors in other brain injuries, such as traumatic brain injury.

“We have shown that we can administer complement inhibitors as far as two months after a traumatic brain injury and see improvements in cognitive recovery,” said Tomlinson. “This is something I’m actually quite excited about. It means that months after an initial event, complement inhibitors could still be beneficial to cognitive recovery after brain injuries, including strokes.”

Founded in 1824 in Charleston, MUSC is the oldest medical school in the South as well as the state’s only integrated academic health sciences center with a unique charge to serve the state through education, research and patient care. Each year, MUSC educates and trains more than 3,000 students and 800 residents in six colleges: Dental Medicine, Graduate Studies, Health Professions, Medicine, Nursing and Pharmacy. The state’s leader in obtaining biomedical research funds, in fiscal year 2019, MUSC set a new high, bringing in more than $284 million. For information on academic programs, visit http://musc.edu.