Discovery a ‘coup’ in astrophysics involving observations with nine instruments 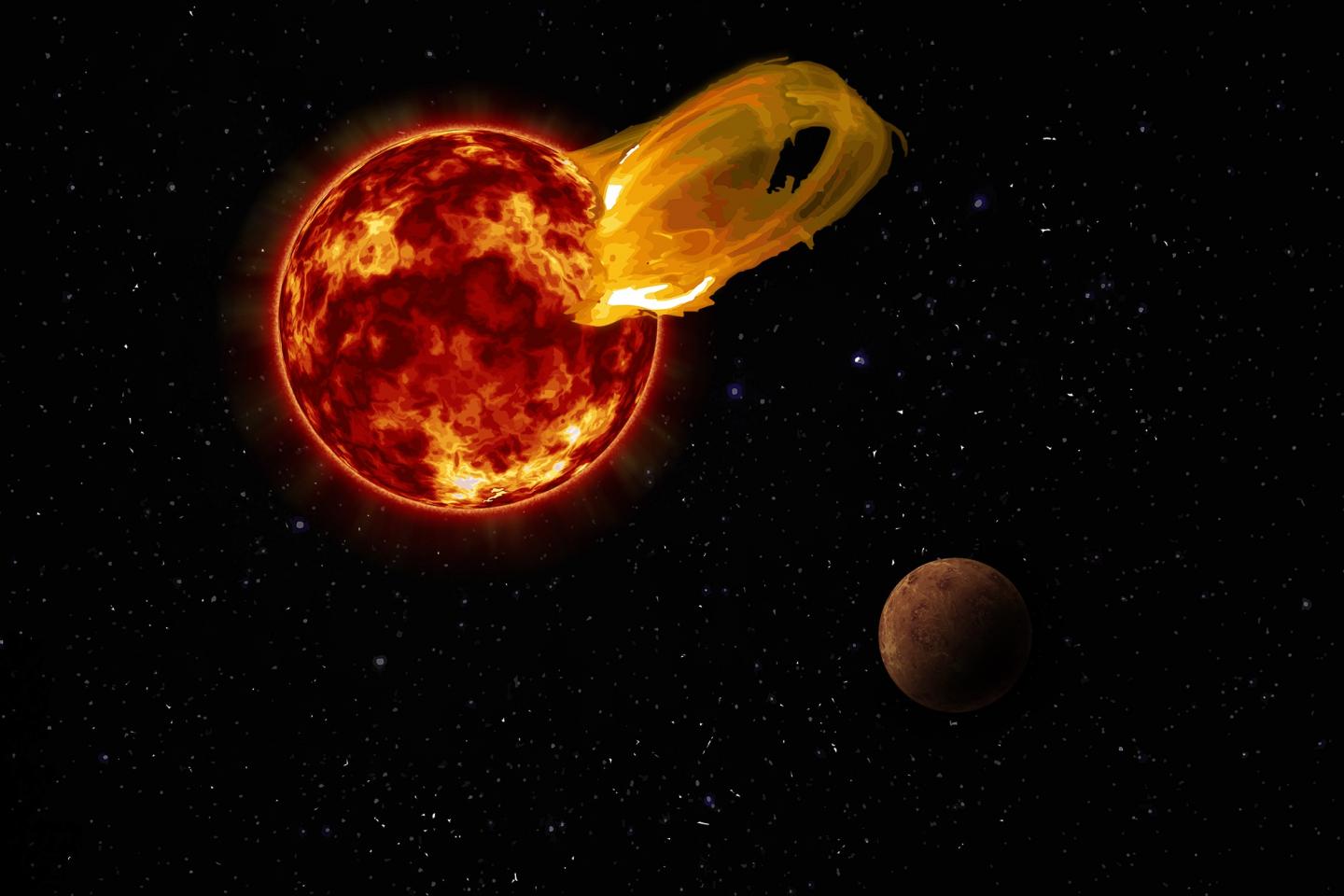 Washington, DC– A team of astronomers including Carnegie’s Alycia Weinberger and former-Carnegie postdoc Meredith MacGregor, now an assistant professor at the University of Colorado Boulder, spotted an extreme outburst, or flare, from the Sun’s nearest neighbor–the star Proxima Centauri.

Their work, which could help guide the search for life beyond our Solar System, is published in The Astrophysical Journal Letters.

Proxima Centauri is a “red dwarf” with about one-eighth the mass of our Sun, which sits just four light-years, or almost 25 trillion miles, from the center of our Solar System and hosts at least two planets, one of which may look something like Earth.

In a worldwide campaign carried out over several months, the researchers observed Proxima Centauri using nine ground- and space-based telescopes. They caught the extreme flare on May 1, 2019, with five telescopes that traced its timing and energy in unprecedented detail.

“The star went from normal to 14,000 times brighter when seen in ultraviolet wavelengths over the span of a few seconds,” said MacGregor.

Stellar flares happen when a shift in the star’s magnetic field accelerates electrons to speeds approaching that of light. The accelerated electrons interact with the highly charged plasma that makes up most of the star, causing an eruption that produces emission across the entire electromagnetic spectrum.

“Proxima Centauri is of similar age to the Sun, so it’s been blasting its planets with high energy flares for billions of years,” said Weinberger. “Studying these extreme flares with multiple observatories lets us understand what its planets have endured and how they might have changed.”

Like many red dwarfs–the most-common stars in the galaxy and hosts to many of the thousands of known exoplanets–Proxima Centauri is very lively.

“If there was life on the planet nearest to Proxima Centauri, it would have to look very different than anything on Earth,” MacGregor said. “A human being on this planet would have a bad time.”

To see just how much Proxima Centauri flares, the researchers pulled off what approaches a coup in the field of astrophysics: They pointed nine different instruments at the star for 40 hours over the course of several months in 2019. Those eyes included the the duPont Telescope at Carnegie’s Las Campanas Observatory in Chile, the Hubble Space Telescope, the Atacama Large Millimeter Array (ALMA), and NASA’s Transiting Exoplanet Survey Satellite (TESS). Five of them recorded the massive May 1 flare from Proxima Centauri, capturing the event as it produced a wide spectrum of radiation. This marked first time astronomers have ever had this kind of multi-wavelength coverage of a stellar flare. Usually, it’s considered lucky to get observations from two instruments.

The technique delivered one of the most in-depth anatomies of a flare from any star in the galaxy. While it didn’t produce a lot of visible light, it generated a huge surge in both ultraviolet and radio, or “millimeter,” radiation. These signals could help researchers gather more information about how stars generate flares.

They also suggest that there may be more surprises in store from the Sun’s “next door” neighbor.

Going forward, “there will probably be even more weird types of flares that demonstrate different types of physics that we haven’t thought about before,” MacGregor concluded.

This work was supported by a U.S. National Science Foundation Astronomy and Astro-physics Postdoctoral Fellowship; NRAO Student Observing Support (SOS) grants; a grant from the Space Telescope Science Institute, which is operated by the Association of Universities for Research in Astronomy; and the GSFC Sellers Exoplanet Environments Collaboration (SEEC), which is funded in part by the NASA Planetary Science Divisions Internal Scientist Funding Model.