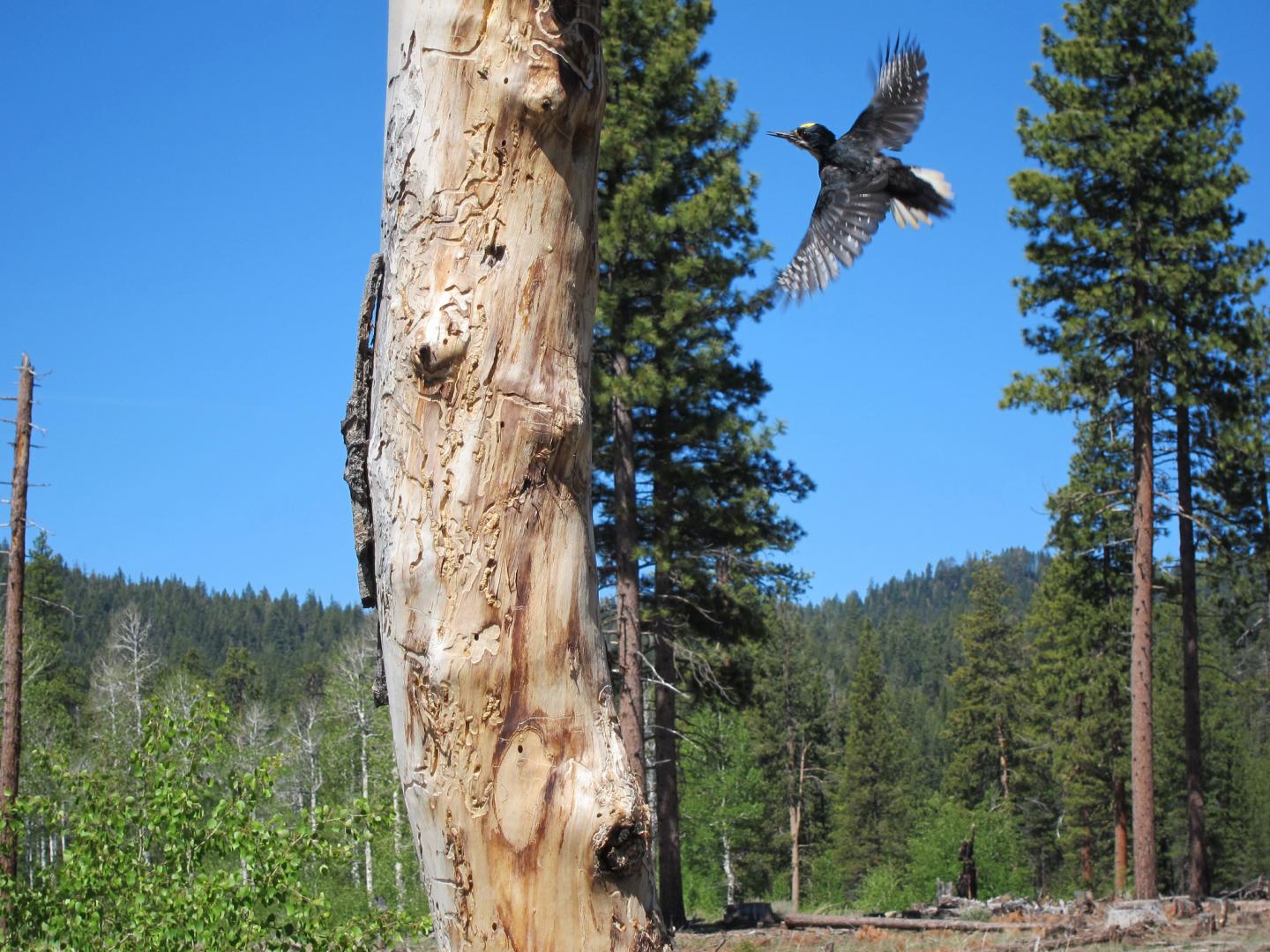 How wildlife respond to climate change is likely to be complex. To better understand the effects of climate change on the bird community in the Sierra Nevada region, new research published today from Point Blue Conservation Science examines the impacts to birds from a recent extreme drought (2013-2016). The drought resulted in the widespread death of pine trees due to attacks by bark beetles, potentially impacting wildlife habitat. While the results were varied, researchers found that many bird species responded positively to the climate conditions associated with the drought, potentially offsetting the negative habitat impacts of the dead trees.

Under the assumption that climate conditions and species’ responses to those conditions during the drought are similar to those that may occur in the future, researchers assessed the influence of temperature, water deficit, and tree mortality on bird abundance for 45 species. Researchers then used those models to project the effect of climate change on the bird community through the year 2050.

“When we began our research, we were not originally thinking that it would result in a ‘climate paper,'” said L. Jay Roberts, Avian Forest Ecologist at Point Blue and lead researcher on the study. “Our hypothesis was that bird populations would decline due to the large-scale tree deaths that resulted from the drought. We were really surprised to see positive bird numbers after the drought and went looking for an explanation. Then, the results started to make sense when we added in the climate data and saw that birds responded more positively to the warmer temperatures than they were negatively impacted by the dead trees and dry conditions.”

Overall, the total number of birds in the study area increased during the drought period and the models project similarly high numbers in response to warmer future climate conditions. Nearly half of the species in the study responded positively to temperature increase, while only 20% declined. Roughly one-third of the species declined in response to higher water deficit, while one-third increased. However, many of the species that benefit from increased temperature were also sensitive to high water deficit and tree mortality. Thus, their positive response to increasing temperatures in the future could be offset by drought or habitat change.

While tree deaths from beetles resulted in a widespread loss of live tree cover in the study area, the short-term effects on the avian community were rather modest. Researchers found that about one-third of the species decline with high tree mortality, but the magnitude of those declines was small relative to the influence of the climate variables. And given more time, some species that utilize dead trees, such as woodpeckers and other cavity nesters, may increase. Since an abundant and diverse assemblage of birds still inhabits the forest stands affected by mortality, forest managers should consider this potentially important biodiversity when developing management responses like salvage logging and reforestation.

“We are really lucky to have such a rich dataset to work with,” said Roberts. “Working in partnership with the Forest Service to conduct this Bioregional Monitoring Project, we had nine years of rigorous observations, which allowed us to answer this important emerging conservation question.”

The full effects of the recent drought and tree deaths are still unfolding. “We know that this was an extreme drought,” said Roberts. “However, given that climate models are predicting more droughts like this in the future, it’s a bit of a relief to see how resilient many bird species are to these kinds of changes and that the drought did not lead to a widespread loss of biodiversity. Still, there were plenty of negative impacts on many species, and some climate predictions are pointing towards temperature extremes beyond those we observed during the drought.”

“We really don’t know how species will respond if temperatures go even higher, “said Roberts.

“There could very well be temperature or precipitation thresholds that we weren’t able to test that could lead to declines for many more species.”

The article, “Recent drought and tree mortality effects on the avian community
in southern Sierra Nevada: a glimpse of the future?” was published on February 20th in the peer-reviewed journal Ecological Applications (DOI 10.1002/eap.1848). https://esajournals.onlinelibrary.wiley.com/doi/full/10.1002/eap.1848

Point Blue advances conservation of birds, other wildlife, and ecosystems through science, partnerships, and outreach. Our highest priority is to reduce the impacts of habitat loss, climate change, and other environmental threats while promoting nature-based solutions for wildlife and people, on land and at sea. Visit Point Blue at http://www.pointblue.org.

New research and education partnership announced between UCL and AIIMS

Study questions current regulations on light pollution and calls for…

Exomoons may be home to extra-terrestrial life