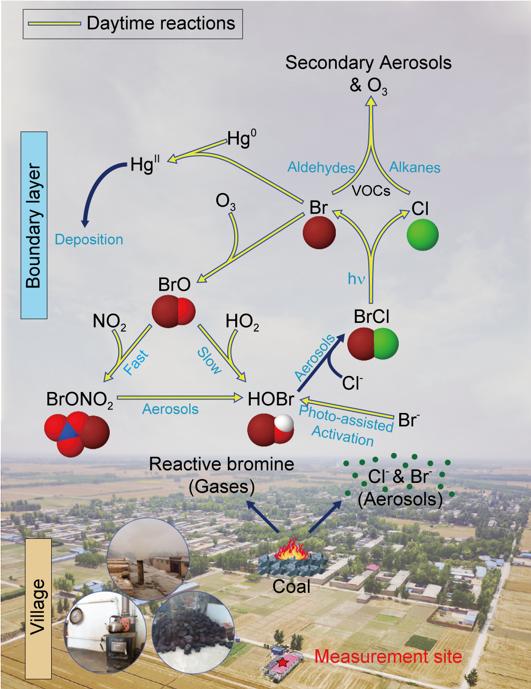 Halogen atoms (Cl and Br) strongly influence the atmospheric chemical composition. Since 1970s, scientists discovered that these atoms were responsible for depletion of ozone in the stratosphere and ground-level ozone of the Arctic. In the past decade, there is emerging recognition that halogen atoms also play important roles in tropospheric chemistry and air quality. However, the knowledge of halogen atoms in continental regions is still incomplete.

“In the troposphere, halogen atoms can kick start hydrocarbon oxidation that makes ozone, modify the oxidative capacity, perturb mercury recycling by oxidizing elementary mercury (Hg0) to a highly toxic form (HgII). Moreover, Cl atoms can remove methane, a climate-forcing agent. Most of the previous studies in the continental regions focused on two Cl precursors, ClNO2 and Cl2. However, little is known on the abundance and the role of bromine compounds and other forms of photoliable halogens in the polluted continental troposphere”, said Tao Wang, a chair professor at The Hong Kong Polytechnic University (HKPU).

A team of Chinese researchers from HKPU, Fudan University, Research Center of Eco-Environmental Sciences of the Chinese Academy of Sciences, Shandong University and Shandong Jianzhu University, measured a suite of reactive halogen gases and other chemicals in winter 2017 at a polluted rural site in Hebei province which frequently suffers from severe air pollution in winter. The data were analyzed by the team in collaborations with scientists from Colorado State University in the US, Institute of Physical Chemistry Rocasolano of CSIC in Spain, and Univ Lyon, Université Claude Bernard Lyon 1, CNRS, IRCELYON in France.

They found surprisingly high concentrations of bromine chloride (BrCl),and other reactive halogen gases. The maximum concentration of BrCl is 10 time larger than the value previously measured in the Arctic. “To our knowledge, only one prior study observed BrCl in one, out of 50, coal-fired power plant plume in the United States. Apart from that, BrCl had not been reported outside of the polar regions.” said Xiang Peng, a graduate student at HKPU. “Accurate measurement of reactive halogen is very challenging” added Weihao Wang, another then graduate student at HKPU, “these compounds are at low concentrations, which requires a sensitive instrument to detect their signals; they are also hard to quantify due to difficulty in making calibration standards and in reducing potential interferences from other co-existing chemicals in the atmosphere and potential artifacts in the sampling inlet.” Nonetheless, the team overcame these challenges via various on-site and post-measurement tests.

The research team found the strong evidence that rural coal burning was a major source of the detected reactive halogens by analyzing their relationship with two tracers of coal burning (sulfur dioxide and selenium), the diurnal pattern of air pollutants, and villager’s energy use practice. They also found an important daytime chemical process, partially from photolysis of nitrate, which could convert insert halides to reactive halogen gases (HOBr and BrCl) so as to sustain their high daytime concentrations despite short lifetime of BrCl from sunlight photo-dissociation.

The team then built a model containing most up-to-date halogen gas-phase chemistry and simulated the impact of the observed photoliable BrCl, Cl2, ClNO2, Br2 on the oxidative capacity which drives the production of pollutants such ozone and particulates. Their results show that BrCl contributed about 55% of both bromine (Br) and chlorine (Cl) atoms. The halogen atoms (from BrCl and other photoliable halogens) increased the abundance of ‘conventional’ tropospheric oxidants (OH, HO2, and RO2) by 26-73%, and enhanced oxidation of hydrocarbon by nearly a factor of two and the net ozone production by 55%. “Such large increase in oxidation could boost production of secondary organic and inorganic aerosols, which are the major components of haze-causing PM2.5 in northern China. Br atoms from BrCl could also accelerate the production and deposition of the toxic form of mercury near the source regions.” added Tao Wang.

The researchers believe that the significant impact of halogen demonstrated at their site may exist in other areas where uncontrolled coal burning is prevalent, such as other parts of northern China, and in countries like India and Russia which has a large share of coal in their energy mix. They call for more research to better understand the source(s) and the spatial extent of the role of the halogen chemistry in the polluted continental regions. They also suggest the need to control halogens from coal-burning, in addition to well recognized CO2, sulfur, nitrogen, particulate, and mercury.