Methanol, produced from carbon dioxide in the air, can be used to make carbon neutral fuels. But to do this, the mechanism by which methanol is turned into liquid hydrocarbons must be better understood so that the catalytic process can be optimised. Now, using sophisticated analytical techniques, researchers from ETH Zürich and Paul Scherrer Institute have gained unprecedented insight into this complex mechanism. 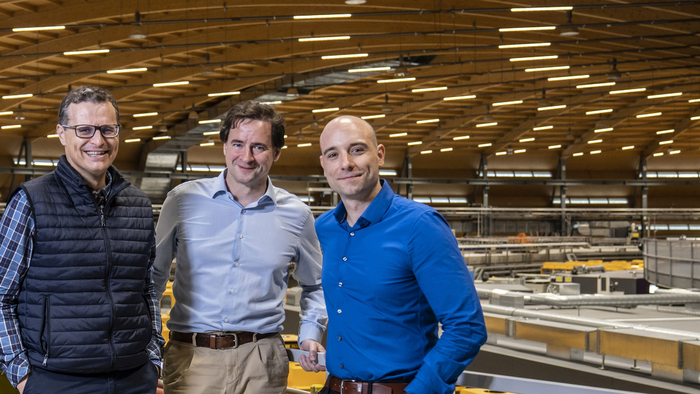 Methanol, produced from carbon dioxide in the air, can be used to make carbon neutral fuels. But to do this, the mechanism by which methanol is turned into liquid hydrocarbons must be better understood so that the catalytic process can be optimised. Now, using sophisticated analytical techniques, researchers from ETH Zürich and Paul Scherrer Institute have gained unprecedented insight into this complex mechanism.

To fully develop this sustainable fuel, a deeper understanding of the mechanism by which methanol – in a reaction catalysed by zeolites, solid materials with unique porous architectures – is turned into long chain hydrocarbons, is necessary. With this in mind, in the frame of NCCR Catalysis, a Swiss National Center of Competence in Research, researchers from ETH Zürich joined forces with researchers from the Paul Scherrer Institut PSI to reveal the details of this reaction mechanism, the findings of which are published in the journal Nature Catalysis.

“Information is key to developing more selective and stable catalysts,” explains Javier Pérez-Ramírez, Professor of Catalysis Engineering at ETH Zürich and director of NCCR Catalysis, who co-led the study. “Prior to our study, despite many efforts, key mechanistic aspects of the complex transformation of methanol into hydrocarbons were not well understood”.

The researchers were interested in comparing the methanol to hydrocarbon process with another process: that of turning methyl chloride into hydrocarbons. Oil refineries frequently burn large quantities of unwanted methane rich natural gas. This polluting and wasteful activity results in the typical flares associated with oil refineries. “Turning methyl chloride into hydrocarbons is a kind of bridge technology,” explains Pérez-Ramírez. “Of course, we would like to move away from fossil fuels but in the meantime this would be a way to avoid wasting the vast reserves of valuable methane”.

Key to understanding complex reaction mechanisms such as these is to detect the different species involved, including the intermediate products. Traditional techniques look directly at the surface of the catalyst to understand the reaction, but an important part of the story is told by gas phase molecules, which come off the catalyst.

“These molecules are often highly reactive and very short lived, decomposing within a few milliseconds. This makes identifying them a real challenge, as traditional gas phase analytical methods are simply too slow,” explains Patrick Hemberger, scientist at the vacuum ultra violet (VUV) beamline of the Swiss Light Source SLS, whose sophisticated analytical techniques would enable the researchers to study the reaction as it happened.

At the VUV beamline, Photoion Photoelectron Coincidence (PEPICO) spectroscopy has recently been established as a powerful analytical tool in catalytic reactions. It combines two different analytical techniques, photoelectron spectroscopy and mass spectrometry, to give detailed information on the gas phase reaction intermediates, even enabling differentiation between isomers.

“Because we simultaneously gather two different types of information, we can rapidly identify these fleeting species even in a mixture containing up to one hundred reaction intermediates and products. This gives us an unprecedented insight that simply isn’t possible with conventional methods,” Hemberger says.

The spectroscopy enabled the researchers to reveal how the carbon-carbon bonds form and the hydrocarbon chain grows by detecting numerous intermediate products. For the two processes – methanol to hydrocarbon and methyl chloride to hydrocarbon – the researchers observed that different reaction intermediates were occurring. From this, they could identify two distinct reaction pathways, one driven by methyl radicals, present in both reactions, and another driven by oxygenated species, so-called ketenes, which occurred only in the methanol to hydrocarbon reaction.

The researchers were also able to understand an interesting feature of the reactions: after several days, the catalyst was deactivated and the reaction stopped. This was because of the build-up of an unwanted by-product – coke, which is made from large aromatic hydrocarbons deposited during the reaction.

With the help of another spectroscopic technique, electron paramagnetic resonance spectroscopy, the researchers saw that the methyl chloride to hydrocarbon production was much more prone to coke formation than production from methanol. Armed with knowledge of the reaction pathways, the reason for this difference was clear: “The methanol to hydrocarbon route proceeds along two reaction pathways, whilst the methyl chloride to hydrocarbon route can only take the more reactive methyl radical route, which is more prone to forming coke,” explains Gunnar Jeschke, whose team at ETH Zürich performed the electron paramagnetic resonance spectroscopy studies.

Understanding the mechanism to optimise the process

The insight gained by this study is essential for the future development of liquid fuels in a sustainable manner. This could include finding ways to enhance the oxygen driven pathway, thus suppressing the formation of coke.

“We now have a deeper understanding of the reaction mechanism of methanol to hydrocarbons or methyl chloride to hydrocarbons and with this knowledge we can optimise the industrial process in a targeted way to make it more efficient,” adds Hemberger.