Tuberous sclerosis complex (TSC) is a rare genetic condition that causes non-cancerous (benign) tumors in various organs of the body, including in the brain. It is also accompanied by patches of unusually light-colored skin, and facial angiofibromas, which are tumors on the face. Affected individuals carry a mutation in the TSC1 or TSC2 gene. It is common for individuals with TSC to exhibit lower intelligence quotient (IQ) along with neuropsychiatric or attention-deficit disorders. 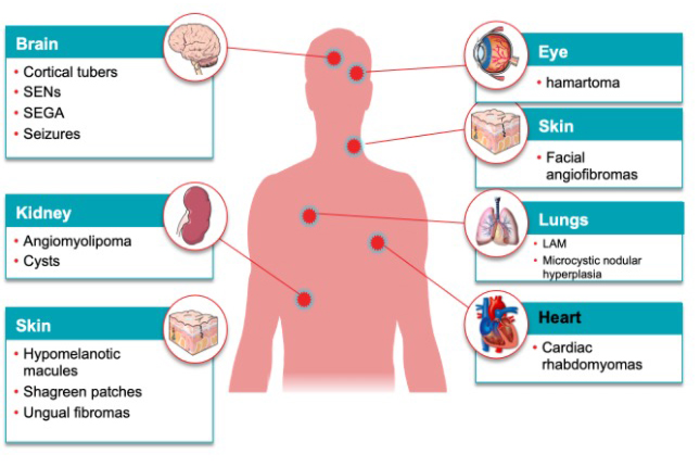 Tuberous sclerosis complex (TSC) is a rare genetic condition that causes non-cancerous (benign) tumors in various organs of the body, including in the brain. It is also accompanied by patches of unusually light-colored skin, and facial angiofibromas, which are tumors on the face. Affected individuals carry a mutation in the TSC1 or TSC2 gene. It is common for individuals with TSC to exhibit lower intelligence quotient (IQ) along with neuropsychiatric or attention-deficit disorders.

While 80-90% of patients with TSC exhibit epilepsy or seizure as the most prevalent symptom, the incidence of independent temporal lobe epilepsy (TLE) is very low or negligible in these patients. Anti-seizure medications (ASMs) are widely used to treat epilepsy. The point of concern is that a vast majority of TSC patients appear to be drug-resistant and continue to experience seizures even while using ASMs.

Given these uncertainties, neurosurgeons resort to surgical resection, which is currently underused in TSC treatment because of a lack of determinants of success. Pre-surgical evaluations such as MRI and stereoencaphelography are helpful in initial diagnosis but cannot determine whether a patient should undergo surgery.

Several studies have highlighted these challenges posed to decision-making before surgery. For instance, a clinical experience made available online on 21 February 2022 and published in volume 6, issue 1 of Pediatric Investigation on 28 March 2022 by scientists in Italy’s Bambino Gesu Children’s Hospital, illustrates the challenges of selecting TSC patients for epilepsy surgery, as well as the factors that impact the outcomes. The patients reported in it were diagnosed with TSC-related seizures, several brain tubers (lesions), and an epileptogenic zone (EZ).

What makes surgery selection so difficult for TSC? Dr. Nicola Specchio, who is the lead author of the aforementioned study, replies, “Multiple tubers in TSC hinder the accurate localization of EZ using surgical procedures. Besides, current guidelines recommend identifying and operating only the target tuber without multifocal or bilateral resection, which can be challenging for any surgeon.”

This has been corroborated by a recent study conducted by another research group at the China’s National Center for Children’s Health. Led by Dr. Guojun Zhang, the study reported three cases that presented similar challenges to surgery. Additionally, these cases confirmed the co-existence of independent TLE with TSC. The patients in the study underwent TLE evaluation with hippocampal sclerosis (HS) and TSC, followed by anterior temporal lobectomies (brain surgery). Despite having post-operative HS as a common pathology, they were seizure-free with improved IQ and quality of life. The outcomes reflected the surgery outcomes reported in the study from Italy, where the patients received brain surgery based on radiologic findings and their partial response to medicines and were seizure free at 1-5 years of follow up, with good quality of life.

Discussing their study that was also published in Pediatric Investigation, Dr. Zhang observes, “Our findings clearly indicate that numerous factors should be taken into consideration for epilepsy surgery.” Additionally, according to previous reports, although a tuber-focused surgery is a good strategy, the relative benefits of other surgical methods are still unclear. Resections that extend beyond the tuber’s borders, such as tuberectomy plus, have been linked to better seizure management.

The cases discussed by Dr. Zhang had the longest follow-up, of 5 years, and the patients are still on ASMs to prevent the recurrences of seizures. “We cannot say whether epilepsy was completely resolved in these patients. This will only be confirmed if they remain seizure-free for ten years without the use of ASMs,” Dr. Zhang mentions.

These two important studies underscore the clinical relevance of diagnosing and treating a rare form of disease, albeit the paucity of long-term follow-up data. The biggest challenge is that, despite the availability of targeted drugs against TSC, incidences of epilepsy are still high. Furthermore, surgeons are still unable to predict which patients would benefit the most after surgeries. Establishing more accurate source localized techniques also have a long way to go.

“Our study illustrates the numerous factors that should be taken into consideration for epilepsy surgery,” Dr. Specchio emphasizes. “More efforts need to be focused on the application of new pre-surgical and surgical approaches which will impact the short and long-term outcomes of these patients. Additionally, the development of consensus guidelines and outcome determinants would help guide surgical selection,” he concludes.

It is thus important to report more cases to raise awareness and help optimize disease management and patient care.

Dr. Nicola Specchio graduated from the University of Bari with a degree in medicine and surgery as well as a PhD in neurosciences. His research mostly focused on drug-resistant focal epilepsies. He is an expert in the interpretation of EEG, Video-EEG, and polysomnography, and is involved in epilepsy research initiatives. Dr. Specchio was elected to the Italian League against Epilepsy’s (ILAE) Board of Directors in 2017. He has won several awards and has over 150 articles published in international publications to his credit. Dr. Specchio has been a member of the International League against Epilepsy’s Global Advocacy Council since 2020.