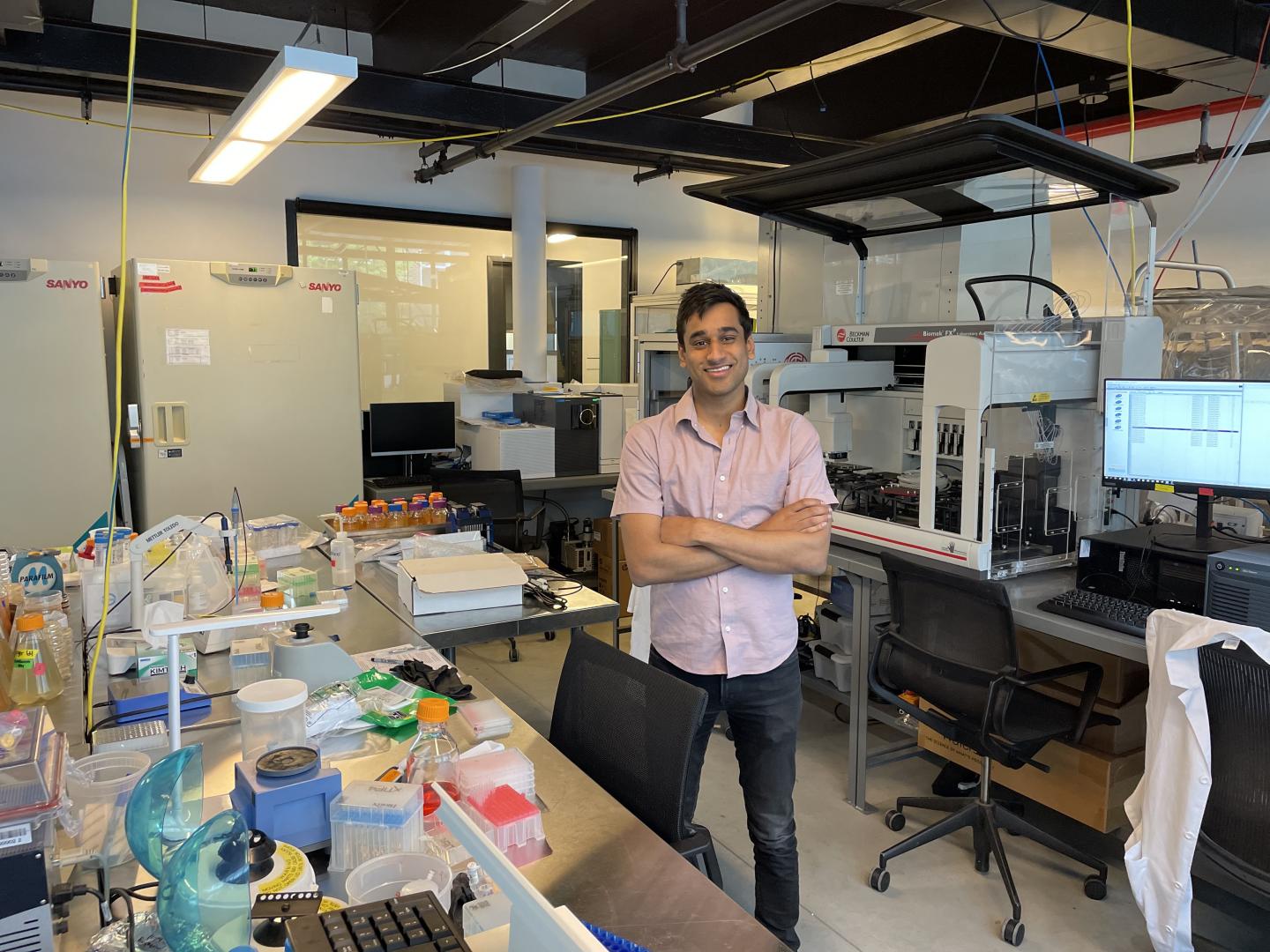 Hertz Fellow Ravi Sheth says his lab in the Brooklyn Navy Yard is “like a Willy Wonka factory of microbes” geared toward improving the taste and safety of food and beverages.

Launching such a company wouldn’t have been as feasible when Sheth started his PhD five years ago on a Hertz Fellowship, because he hadn’t yet invented the tools to mechanistically understand how microbiomes work.

Sheth’s “golden ticket” was his doctoral thesis, “New Tools for Understanding and Engineering Complex Microbial Communities,” for which he was awarded the 2020 Hertz Thesis Prize. It’s based on work he conducted in Harris Wang’s lab at Columbia University during his Hertz Fellowship.

“The field had fundamental measurement problems,” he said. “It was really like the Wild West. Now we’re able to use tools to quantitatively understand and measure how microbiomes change over space and time and how they work from an ecosystem perspective.”

Measuring the microbiome was a complex challenge. Sheth leveraged the CRISPR-Cas immune system to develop a microscopic tape recorder that captured environmental signals from populations of microbes. The genetic circuit captured information of how environmental signals changed over time–which hadn’t been accomplished previously–and encoded them in the DNA sequence of the cells themselves. The tools were also able to record other pieces of information, like horizontally transferred DNA sequences in complex microbiomes.

“What’s really cool is that this wasn’t a single circuit in a single cell. This circuit actually required an entire population of cells that was self-regenerating,” he said.

Using new sampling and statistical approaches, Sheth also mapped how microbes interact with each other at both a microscopic (micron) level and a much larger (centimeter) level with high complexity. Sheth used these new tools to understand how a person’s microbiome changes over time and in response to changes such as diet. He also discovered that fluctuations of a microbiome are similar to other physical interacting systems, like bird populations and the stock market. This points to a potential set of universal principles that microbiomes also follow, he said.

“It’s an honor and privilege to have the work in my PhD recognized,” Sheth said. “I have tremendous respect for all the Hertz Fellows, and it’s deeply meaningful to have my thesis work selected.”

Some of Kingdom Supercultures’ first ingredients will be hitting shelves across stores in the United States this fall, though specifics are under wraps for now. In general, they include new cultures for plant-based foods, fermented and alcoholic beverages, and novel personal care products for some of the largest consumer packaged goods manufacturers.

“We’re super excited about the products that we’re working on,” Sheth said. “We do a lot of taste, flavor and sensory work and what’s cool is that these individual microbes have the magical ability to transform foods into something entirely new. We do in-depth experiments to generate a ton of data, but then ultimately for almost everything we do, we get to taste at the end, which is a viscerally exciting outcome.”

Some companies have made inroads in the culture market, but they typically rely on a limited set of a few dozen microbes, Sheth said. Kingdom Supercultures is taking a different approach, using a much broader range of natural microbes that interact with each other.

“They can synergize with each other and accomplish biotransformations that no single organism can do. All without any genetic modification,” Sheth said.

Sheth, 27, cofounded his company right after earning his PhD. After graduation, he gave a talk at a microbiome conference in Ireland, flew home and immediately moved into his new lab. Kingdom raised venture capital funding through Y Combinator, one of the top startup accelerators focused on technology. The company quickly began generating revenue through research and development of new foods.

In addition to using tools he developed in graduate school, Sheth is also excited by new measurement tools, such as confocal microscopy. “It allows us to see exactly what the microbes are doing and is an entirely new type of measurement. We’re using it to generate massive amounts of data in the lab across a number of projects.”

Value of the Hertz Fellowship

At the time, the Gates Foundation wanted to determine if twice-yearly doses of azithromycin could reduce childhood mortality in sub-Saharan Africa, where 1 in 19 children dies before reaching the age of five. The drug, made more palatable with a dash of banana flavoring, reduced all-cause childhood mortality by 14 percent.

“The work was really transformative in how I thought about the impact of technology in the world. I learned you can have the best technological solutions to problems, but there are so many other factors to consider in terms of costs, acceptability, scale and distribution. It profoundly impacted how I thought about my long-term career, next steps and potential impact,” Sheth said.

In Wang’s lab, Sheth led a follow-up study to determine to what extent the antibiotic reshaped the microbiome in animal models. Sheth helped build a map of how the microbiome recovers and reshapes itself following administration of the antibiotic, using both microbiome approaches and novel techniques he developed.

“Understanding the mechanism of action is actually quite important for scaling this as an intervention and developing new and better interventions in the future,” he said. “The other interesting aspect is that these macrolide antibiotics are natural products made by different microbes. And so it begs the question, what is the role of these antibiotics in natural ecosystems? It’s such a fascinating set of problems and obviously has profound implications for human health.”

Sheth has been growing tiny things since childhood. “In high school, somebody gave me a kombucha scoby and I was fascinated by how this weird mat self-replicated. It’s super slimy, but then it transforms sugar tea into something entirely new.”

He grew up in a family fascinated by biological sciences and design. Sheth’s mother was an architect who became an arts educator. His father is an engineer who worked his entire career in research and development at Procter & Gamble, and his sister is starting a bioengineering PhD at Stanford University this fall.

“It was a really interesting childhood. The intersection of art and science influenced a lot of the ways I think,” Sheth said.

Sheth has now brought that creativity to microbes and wants to share his fascination with others.

“When people think of microbes, they imagine these icky pathogens that cause disease,” he said. “But microbes are so much more than that. These microorganisms have an incredible transformative ability, and we’ve probably only discovered 1 percent of what they can do. The other 99 percent has the potential to drive another technological revolution similar to the impact of material science, electronics and computer networking in the 20th century. Thinking about this gets me really excited about what we’re working on every day.”

The Fannie and John Hertz Foundation identifies the nation’s most promising innovators in science and technology, and empowers them to pursue solutions to the world’s toughest challenges. Launched in 1963, the Hertz Fellowship is the most exclusive fellowship program in the United States, fueling more than 1,200 leaders, disruptors, and creators who apply their remarkable talent where it’s needed most–from improving human health to protecting the health of the planet. Hertz Fellows hold 3,000+ patents, have founded 200+ companies, and have received 200+ major national and international awards, including two Nobel Prizes, eight Breakthrough Prizes, the National Medal of Technology, the Fields Medal, and the Turing Award. Learn more at HertzFoundation.org.