How rattlesnakes got, and lost, their venom 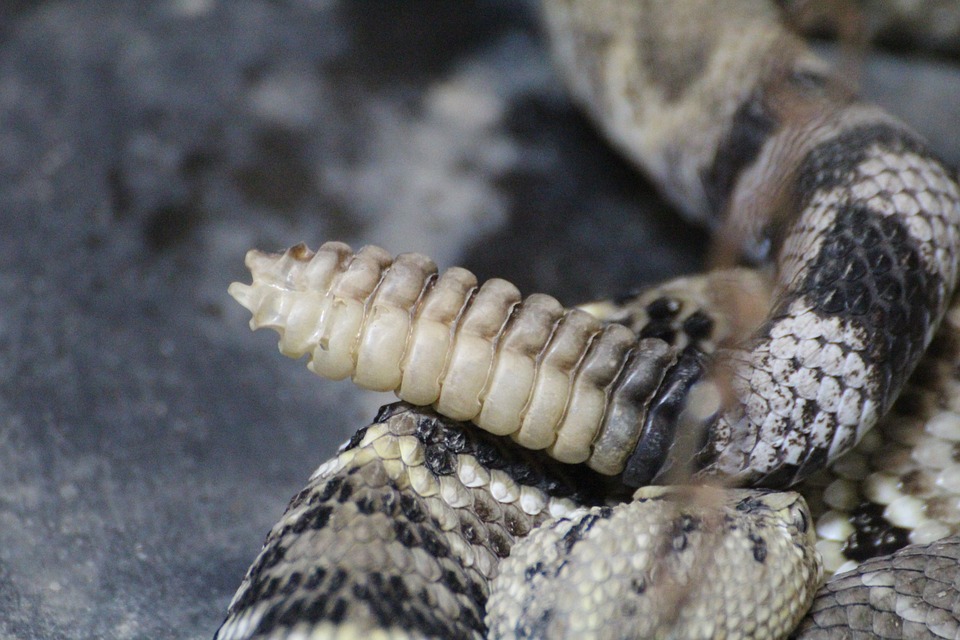 Millions of years ago, as the snake family tree grew new branches, the ancestor of modern rattlesnakes was endowed with a genetic arsenal of toxic weaponry, including genes for toxins that poison the blood, toxins that damage muscle and toxins that affect the nervous system, a research team headed by Sean B. Carroll at the University of Wisconsin-Madison has learned.

But in a relatively short period of evolutionary time, as that limb branched further, rattlesnakes like the Eastern and Western Diamondback of North America shed their neurotoxin genes altogether, keeping instead those for toxins that damage the muscles and blood vessels of their prey. Meanwhile, the Mojave rattlesnake retained the neurotoxin and lost certain other genes. Their study is published in the journal Current Biology.

“We were mining the DNA record for information about how evolution works,” says Carroll, professor of molecular biology and genetics at UW-Madison and vice president for science education at the Howard Hughes Medical Institute (HHMI). “To peer into these snakes, which are relatively young in terms of evolutionary time, and to see such dramatic differences in who’s-got-what genetically is really surprising. These kinds of genetic changes don’t usually happen on this time scale, to this extent.”

With Elda Sanchez, a collaborator at the National Natural Toxins Research Center and chemistry department at Texas A&M University-Kingsville, and colleagues at HHMI, UW-Madison postdoctoral researchers Noah Dowell and Matt Giorgianni got to work tracing the genetic origin and evolution of rattlesnake toxins.

To do so, they examined the genetic code of rattlesnake family members and reconstructed their evolutionary history. They found that neurotoxin genes evolved about 22 million years ago, before the first rattlesnakes appeared, beginning 12 to 14 million years ago.

“Snakes presented this really interesting problem in that you have all these different species of rattlesnakes that came into the New World relatively recently, and they have expanded and diversified greatly,” says Giorgianni. “For evolutionary biologists, that’s really interesting. We were curious how the components of their venom have changed so quickly over time.”

So, they studied the individual branches on the rattlesnake family tree. What they found surprised them and challenged all of their initial hypotheses: Rattlesnakes have quickly evolved a great variety of differences through the loss of genes, resulting in varying venom gene numbers and types.

Each rattlesnake lineage has deleted two to four entire venom genes compared to their common ancestor, while retaining the genes for only a subset of venom types. The subset of genes each snake species retained varies. Further, only two of the original seven full-length venom genes are shared between the Mojave rattlesnake, the Western Diamondback and the Eastern Diamondback.

“A lot of the genes we’ve worked on in the lab are genes that are incredibly conserved through history and have changed very little in half-a-billion years, either in number or in character,” says Carroll. “This wholesale loss is unusual … it’s not just run-of-the-mill, ordinary variation.”

In most species studied, genes that are no longer necessary usually linger a long time in the genome, eventually degrading. For instance, in the human genome we still see the remnants of the large olfactory receptor gene family that gave our evolutionary ancestors a keen sense of smell, even though humans no longer rely on them.

It left the researchers wondering: “How do you have these very different weapons and how did they evolve so quickly and so differently?” says Dowell. Why did snakes delete completely the genes for a variety of toxins?

Giorgianni and Dowell worked tirelessly to determine what they call the “birth order” of the toxin genes to learn just when they first showed up, and when each rattlesnake deleted them. If the genes were a long train, it would be akin to determining the order in which the train’s cars were originally linked and when each rattlesnake lost individual cars in the train.

Importantly, the researchers also learned how this happened.

The genes that make the toxin proteins sit within a complex that has embedded within it a type of genomic sequence called a transposable element. Transposable elements are made up of the same nucleotide letters that define all genetic material, but only sometimes code for the genes that lead to proteins. However, they make it easier for genes to be duplicated within the complex, and for genes to be deleted.

“You can envision a real quick and dynamic process in rattlesnakes, where this whole locus (stretch of DNA) is sort of breathing — expanding and contracting,” says Giorgianni. “It really highlights how dynamic this genomic region is and helps put into perspective how quickly these things could happen.”

Not only does this appear to have led to the unusual venom differences between species, but the researchers found variety in the genes within species as well. Dowell and Giorgianni, assisted by Sanchez, examined four Western Diamondback snakes and looked at their venom gene complexes. One of the snakes had two additional venom genes that the other three lacked, as well as other changes in the complex.

“Aficionados in snake venom have appreciated this variation in venom types within a single species for a long time,” says Dowell. “No one had provided a genetic explanation at this level.”

That genetic explanation was finally made possible because of technology that enabled the lab to perform high-quality sequencing of specific genome regions. But the researchers also looked in places that biologists rarely do: at regions of the genome that do not code for proteins. It enabled them to peer into an evolutionary window most biologists ignore, Carroll says.

“There are so many opportunities now for understanding what’s going on and extending this work outside of snakes to ask: ‘How do genomes work in general?'” says Dowell. The researchers can’t say for certain why snakes got rid of some of their weapons, but ecologically, they say it’s likely related to the individual circumstances each species found itself in over time. Perhaps their prey was more susceptible to one type of venom or another, or evolved defenses against one type but not another.

“I think there’s good evidence in nature that there is an arms race going on that generally exists between predators and prey,” says Carroll. “Those arms races can be pretty intense and not dissimilar to things like antibiotics and bacteria, where you have a really strong, kind of do-or-die selective pressure that can accelerate the pace of evolution and intensify the changes that take place over time.”

“It’s the ecological theater in the evolutionary play and we’re watching the drama unfolding,” he adds.

He is also optimistic the snake genome will continue to tell interesting stories. “We’re interested in generality in biology,” Carroll says. “You want to discover new phenomena, new rules, new insights. The gamble was that snakes, because of their lifestyle, because they make this concoction of toxins, might have some evolutionary tricks we haven’t seen before … There are other chapters to unfold here.”

The above post is reprinted from materials provided by University of Wisconsin-Madison. The original item was written by Kelly April Tyrrell. Note: Content may be edited for style and length.