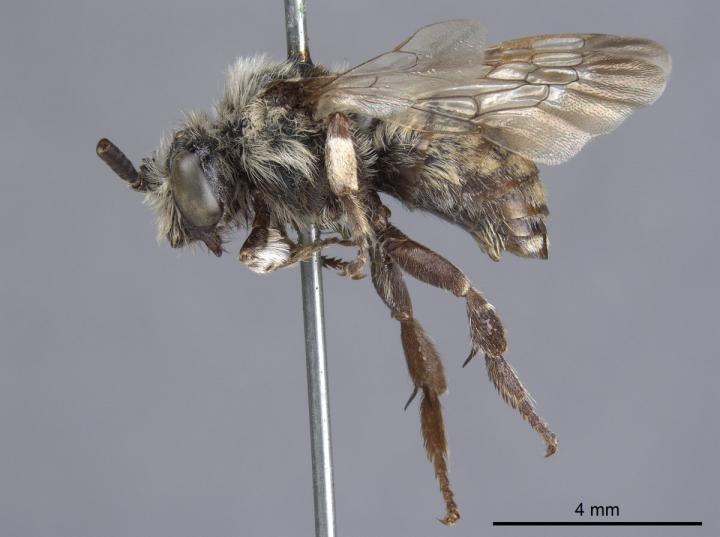 June 15, 2021 – Canadian researchers have discovered that a bee thought to be one of the rarest in the world, as the only representative of its genus, is no more than an unusual specimen of a widespread species.

Scientists with the Canadian Museum of Nature (CMN) and York University have reclassified the mystery bee, collected somewhere in Nevada in the 1870s, as Brachymelecta californica. They note that it’s an aberrant individual of a species, the California digger-cuckoo bee, that is part of a group that includes five other species. All are cleptoparasitic bees, with females that lay eggs in the nests of digger bees. Brachymelecta californica itself is known to be widespread from western Canada to southern Mexico.

The paper setting the record straight is published today in the European Journal of Taxonomy. “The unusual specimen has puzzled bee researchers for decades, and deceived some of the world’s great experts on bee taxonomy” says Dr. Thomas Onuferko, research associate with the CMN and the study’s lead author. “They can now stop searching for more examples of this ‘rare’ bee.”

The bee was first described in 1879 by American entomologist Ezra Townsend Cresson from the Nevada specimen. It was later placed in its own genus, and renamed Brachymelecta mucida in 1939, a name that has only ever been associated with this lone specimen.

It stood apart from other related bees because its abdomen’s dorsal surface is unusually covered in pale hairs, these being partly dark in other specimens of what are now understood to be the same species. Another unusual feature is that the fore wings of the specimen each have two submarginal cells (the normal number for the bees in this group is three). These two features had confused everyone, until now.

In 2019, Onuferko was able to examine the rare specimen during a visit to the collections at Philadelphia’s Academy of Natural Sciences of Drexel University. There, he discovered a series of other specimens with the same vague locality labels, but these bees were identified as Xeromelecta californica, a species that was also described by Cresson in the year before the description of the mystery species.

In some of the specimens, the pattern of veins in the wings is the same as in the mystery specimen. “At that point, I made the connection that these specimens might all be the same species,” says Onuferko.

This connection was further boosted by the discovery in Dr. Laurence Packer’s collection at York University of a bee that also had conspicuously pale hairs on its entire abdomen. DNA barcoding confirmed the specimen to be Xeromelecta californica. Hairs that are normally dark in this species were completely light. Onuferko and Packer, who also collaborated on the study, concluded that the hairs likely lacked pigmentation due to a form of partial albinism.

The finding surprised Packer because some of the best bee biologists had studied the specimen, but he adds, “Rummaging around in old collections is actually an important thing to do. There is a lot to discover within museum collections, and in this case the rummaging revealed that a rare bee is not so rare after all.”

The discovery has prompted an unusual name change, which is based on rules of the organization that governs the naming of animal species–the International Commission of Zoological Nomenclature. Due to the chronology of dates in which the bees’ various genus and species names were published, Brachymelecta californica takes precedence as the accepted name, and the five related species classified as Xeromelecta are now also part of the genus Brachymelecta. This genus, previously known from a single specimen, is now known from most of the bee collections in North America.

“The reclassification of this bee shows why it’s important to describe new taxa from multiple examples and why entomologists collect specimens in series,” explains Onuferko. It is impossible to know the range of variation within a species with a single specimen, and describing new species from a lone sample risks mistaking an aberrant specimen for a new species.

New species still occasionally get described from single specimens; however, in such cases the new species should be thoroughly justified (using both molecular and morphological evidence, if possible), to avoid taxonomic problems down the line.

The study’s authors explain that many researchers have written about the mystery bee under its earlier classification as Brachymelecta mucida, meaning that intellectual resources were dedicated to a specimen that did not merit them. “Bee collectors were effectively in search of an elusive ‘white whale; or more appropriately, a ‘whitish bee’, a species that evidently only existed in the minds of taxonomists,” says Onuferko.

About the Canadian Museum of Nature

Saving the world through evidence, knowledge and inspiration! The Canadian Museum of Nature is Canada’s national museum of natural history and natural sciences. The museum provides evidence-based insights, inspiring experiences and meaningful engagement with nature’s past, present and future. It achieves this through scientific research, a 14.6-million specimen collection, education programs, signature and travelling exhibitions, and a dynamic web site, nature.ca.