As temperature decreases, so does the electrical resistance of metals — most of the time. In metal with magnetic impurities, electrical resistance can increase as the temperature drops due to a strange phenomenon called the Kondo effect. Caused by quantum interactions between the magnetic impurities and conduction electrons in the metal, the Kondo effect has appeared largely limited to compounds consisting of rare earth elements. 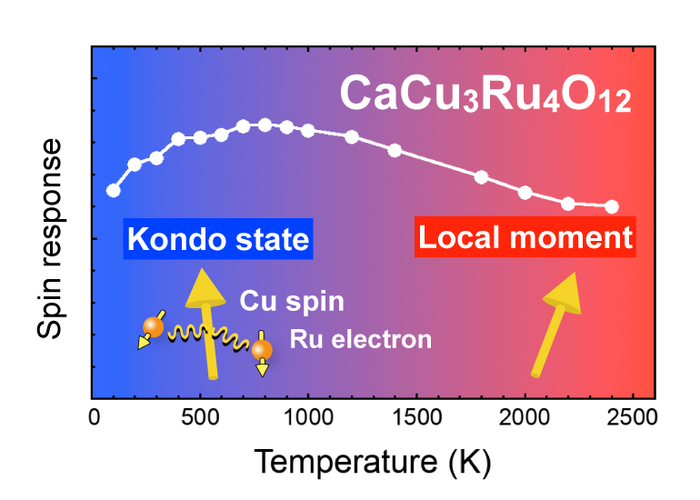 As temperature decreases, so does the electrical resistance of metals — most of the time. In metal with magnetic impurities, electrical resistance can increase as the temperature drops due to a strange phenomenon called the Kondo effect. Caused by quantum interactions between the magnetic impurities and conduction electrons in the metal, the Kondo effect has appeared largely limited to compounds consisting of rare earth elements.

Now, however, an international research group has demonstrated that the Kondo effect can take place in a transition metal oxide CaCu3Ru4O12 (CCRO). The team, led by Atsushi Hariki, assistant professor in Osaka Prefecture University, Department of Physics and Electronics, says their study settles previous dissenting assertions on CCRO, and brings the Kondo field of physics into the research area of transition metal oxides, such as magnetism, heavy fermion and superconductivity.

The team published their results on January 26, 2022 in Physical Review X.

Ten years ago, an experimental study indicated that Kondo-like properties were present in CCRO, which consists of one atom of calcium (Ca), three of copper (Cu), four of ruthenium (Ru) and twelve of oxygen (O) in the chemical formula. But the required fingerprints of the Kondo effect were not found in follow-up experiments, so many in the field resisted calling CCRO a Kondo material.

“We proved that the Kondo physics is present in a transition metal oxide with perovskite crystal structure, — CCRO — by resolving the conflicting discussions so far,” said Atsushi Hariki, assistant professor in the Department of Physics and Electronics, Graduate School of Engineering, Osaka Prefecture University.

The Kondo effect is characterized by a screening of a localized spin (magnet) by surrounding electrons in metals, as depicted in the illustration. The temperature at which this screening starts to take place is called the Kondo temperature.

According to Hariki, previous studies that concluded CCRO did not exhibit Kondo effect were conducted at moderate temperatures too low for the makeup of the compound. They challenged the estimation of Kondo temperature in CCRO.

“The key point of our study is the fact that the Kondo temperature in CCRO is so high, at least 500K,” Hariki said. This means that one must go far beyond the boiling point of water (373K) to observe the Kondo effect. “Experimentally, this temperature was inaccessible, but the computational simulation is doable at such a high temperature.”

To reach this goal, the research group built a model simulating CCRO by determining the energies of electrons inside the material using x-ray photoemission spectroscopy technique which can pluck electrons moving around the constituent elements by the Einstein’s photoelectric effect. The x-ray photoemission spectroscopy measurements were conducted by an international experimental team led by Daisuke Takegami and Liu Hao Tjeng at Max Plank Institute for Chemical Physics of Solids.

“The computer simulation reveals a crossover from a nonmagnetic to a local moment, the fingerprint of the Kondo effect,” Hariki said. “We found the dynamics of copper 3D spins — a motion of the spins in doing the scattering of the conducting electrons— exhibit the Kondo behavior in the range of 500 to 1000K. As such, CCRO must be classified as a Kondo system with a high Kondo temperature.”

About Osaka Prefecture University, Japan
Osaka Prefecture University (OPU) is one of the largest public universities in Japan.
OPU comprises three campuses, with a main campus in Sakai, Osaka. With four colleges for undergraduate students and seven graduate schools, the university offers stellar education in a myriad of fields like engineering, life and environmental sciences, science, economics, humanities and social sciences, and nursing. Not just this, the university also houses various international students, who can enrich their lives with opportunities for internships and exchange programs.
In April 2022, OPU will unite with Osaka City University (OCU) to form Japan’s largest public university, Osaka Metropolitan University.