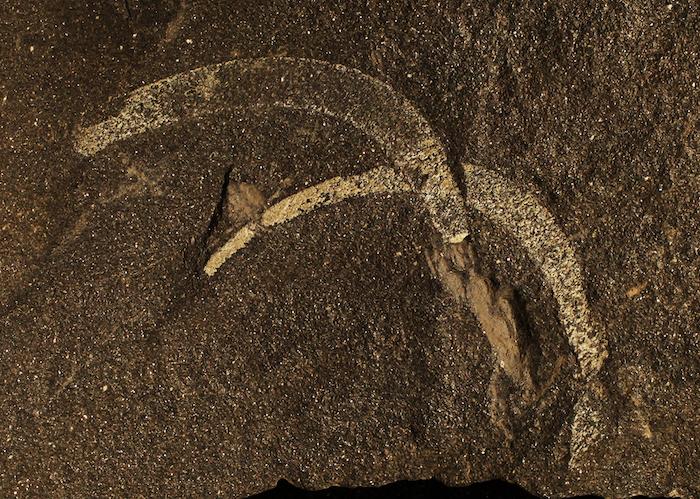 LAWRENCE — A clutch of marine fossil specimens unearthed in northern Portugal that lived between 470 and 459 million years ago is filling a gap in understanding evolution during the Middle Ordovician period.

The discovery, explained in a new paper just published in The Science of Nature, details three fossils found in a new “Burgess Shale-type deposit.” (The Burgess Shale is a deposit in Canada renowned among evolutionary biologists for excellent preservation of soft-bodied organisms that don’t have a biomineralized exoskeleton.)

“The paper describes the first soft-body fossils preserved as carbonaceous films from Portugal,” said lead author Julien Kimmig, collections manager at the University of Kansas Biodiversity Institute and Natural History Museum. “But what makes this even more important is that it’s one of the few deposits that are actually from the Ordovician period — and even more importantly, they’re from the Middle Ordovician, a time were very few soft-bodied fossils are known.”

Kimmig and his KU Biodiversity Institute colleagues, undergraduate researcher Wade Leibach and senior curator Bruce Lieberman, along with Helena Couto of the University of Porto in Portugal (who discovered the fossils), describe three marine fossil specimens: a medusoid (jellyfish), possible wiwaxiid sclerites and an arthropod carapace.

“Before this, there had been nothing found on the Iberian Peninsula in the Ordovician that even resembled these,” Kimmig said. “They close a gap in time and space. And what’s very interesting is the kind of fossils. We find Medusozoa — a jellyfish — as well as animals which appear to be wiwaxiids, which are sluglike armored mollusks that have big spines. We found these lateral sclerites of animals which were actually thought to have gone extinct in the late Cambrian. There might have been some that survived into the Ordovician in a Morocco deposit, but nothing concrete has been ever published on those. And here we have evidence for the first ones actually in the middle of the Ordovician, so it extends the range of these animals incredibly.”

Kimmig said the discovery of uncommon wiwaxiids fossils in this time frame suggests the animals lived on Earth for a far greater span of time than previously understood.

“Especially with animals that are fairly rare that we don’t have nowadays like wiwaxiids, it’s quite nice to see they lived longer than we ever thought,” he said. “Closely after this deposit, in the Upper Ordovician, we actually get a big extinction event. So, it’s likely the wiwaxiids survived up to that big extinction event and didn’t go extinct earlier due to other circumstances. But it might have been whatever caused the big Ordovician extinction event killed them off, too.”

According to the researchers, the soft-bodied specimens fill a gap in the fossil record for the Middle Ordovician and suggest “many soft-bodied fossils in the Ordovician remain to be discovered, and a new look at deep-water shales and slates of this time period is warranted.”

“It’s a very interesting thing with these discoveries — we’re actually getting a lot of information about the distribution of animals chronologically and geographically,” Kimmig said. “Also, this gives us a lot of information on how animals adapted to different environments and where they actually managed to live. With these soft-body deposits, we get a much better idea of how many animals there were and how their environment changed over time. It’s something that applies to modern days, with changing climate and changing water temperatures, because we can see how animals over longer periods of time in the geologic record have actually adapted to these things.”

“Based on the shelly fossils, the deposit looks like it was a fairly common Ordovician community,” Kimmig said. “And now we know that in addition to those common fossils jellyfish were floating around, we had sluglike mollusks roaming on the ground, too, and we had bigger arthropods, which might have been predatory animals. So, in that regard, we’re getting a far better image with these soft-bodied fossils of what these communities actually looked like.”

According to the KU researcher, scientists didn’t grasp until recently that deposits from this period could preserve soft-bodied specimens.

“For a long time, it was just not known that these kinds of deposits survived in to the Ordovician,” Kimmig said. “So, it is likely these deposits are more common in the Ordovician than we know of, it’s just that people were never looking for them.”

Kimmig led analysis of the fossils at KU’s Microscopy and Analytical Imaging Laboratory to ensure the fossils were made of organic material. Leibach, the KU undergraduate researcher, conducted much of the lab work.

“We analyzed the material and looked at the composition because sometimes you can get pseudo fossils — minerals that create something that looks like a fossil,” Kimmig said. “We had to make sure that these fossils actually had an organic origin. And what we found is that they contain carbon, which was the big indication they would actually be organic.”

UV light may illuminate improvements for next generation electronic devices

Scienmag Jul 31, 2019
Credit: Pancreatic Cancer Research Fund Scientists have found a way to target and knock out a single protein that…