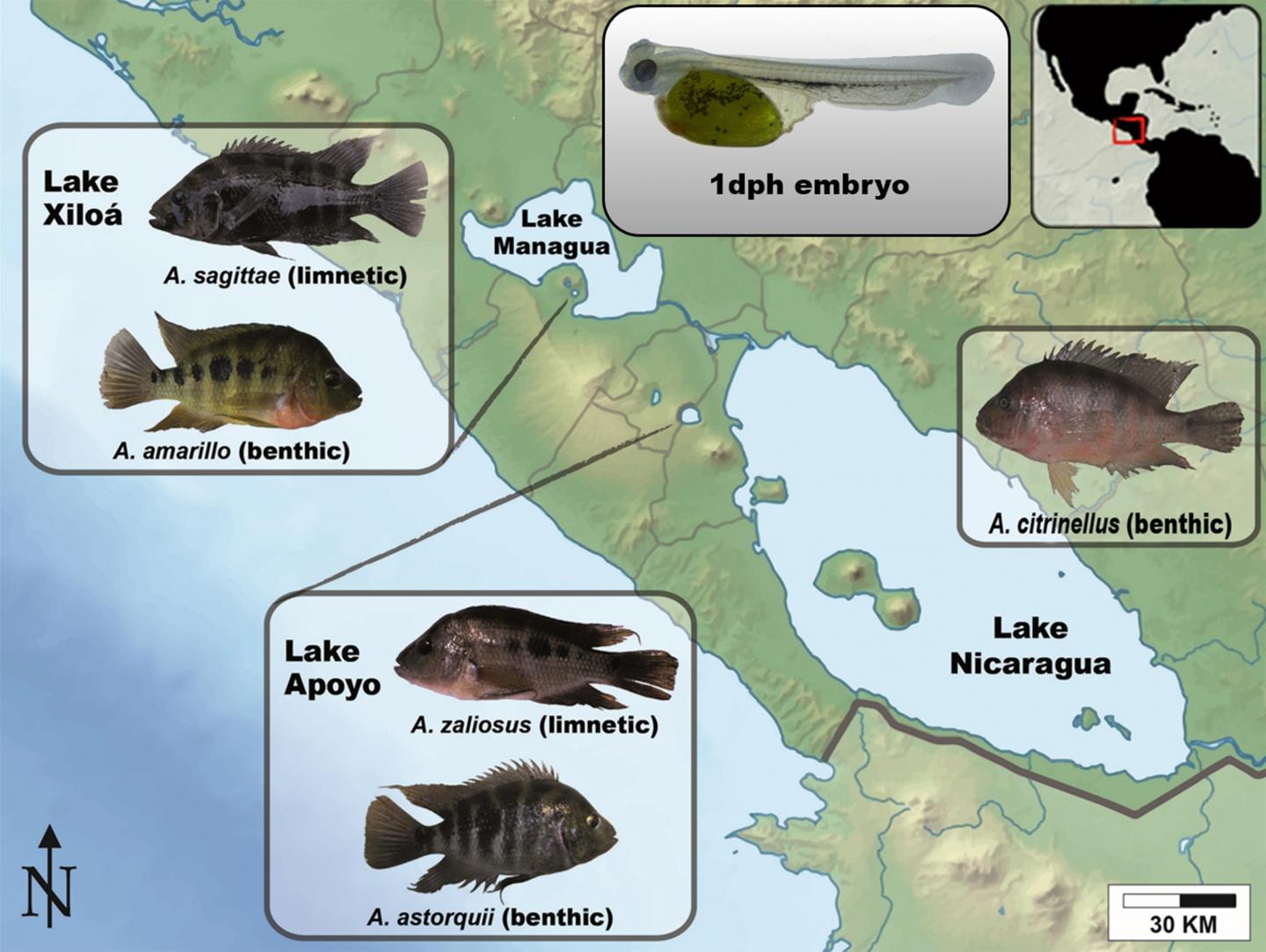 The mechanisms by which new species arise are still not fully understood. What are the evolutionary processes that drive the evolution of new species? Evolutionary biologists traditionally assumed that geographical barriers between animal populations play a decisive role (allopatric speciation): a species is physically separated into two or more isolated populations, thereby preventing gene flow between these groups. The subpopulations adapt to their respective habitats and evolve into independent species with different characteristics. In recent years, however, the evolutionary biologist Professor Axel Meyer from the University of Konstanz has not only been able to show that new species can evolve from a source population within a shared habitat and in the presence of gene flow (sympatric speciation), but that this type of speciation might be much more common than previously thought. His laboratory is investigating both the ecological and genetic mechanisms that facilitate sympatric speciation. In a recent publication in the scientific journal Molecular Biology and Evolution, Axel Meyer and his colleagues Paolo Franchini, Peiwen Xiong, Carmelo Fruciano, Ralf Schneider, Joost Woltering and Darrin Hulsey identify the decisive role that a kind of genetic switch, microRNAs, play in sympatric speciation.

The researchers led by Axel Meyer analyze the Midas cichlid fish from Nicaragua’s volcanic crater lakes as a model system in their research. Cichlids are known for their ability to adapt to new environments at an exceptionally rapid rate and to form new species. The new fish species originate from a population found in the large lakes of Nicaragua, but after colonizing several very small and young crater lakes, they adapted to new ecological niches, evolved new characteristics (e.g. a more elongated body or a different jaw) and evolved into a variety of new species in less than 22,000 years. A further distinctive feature of these Midas cichlids is that they evolved into different species within the same population, sometimes repeatedly, by adapting to different ecological niches within their small crater lakes. The Midas cichlids of Nicaragua are thus one of the best known examples for sympatric speciation. Within such a short time period new mutations are very unlikely to happen. This made finding a molecular mechanism that can bring about different body shapes, adaptations and thereby distinct ecological niches so difficult and interesting. The evolution of microRNAs and new target sites for them to regulate the expression of genes offers one potential molecular mechanism that can bring about very fast evolutionary change with very little genetic differences between the extremely young species.

The biologists from Konstanz carried out genetic analyses of five species of Midas cichlids from the crater lakes Apoyo and Xiloá. Here, they focused in particular on the function of the so-called microRNA – a non-coding ribonucleic acid that has a regulatory effect on gene expression. The researchers found an increased activity of microRNA in young fish one day after they hatched during a phase in which the fish bodies are formed. They analyzed the interaction between microRNA and gene expression, identifying specific pairs of microRNAs and genes that influence each other. The microRNA suppresses the expression of the target genes and thus has a regulatory effect on them: the more active a particular microRNA is, the more effectively the target gene is suppressed or “switched off”. “Our research results provide strong evidence that extremely quickly evolving microRNA regulation contributes to the rapid sympatric speciation of Midas cichlids,” says Paolo Franchini.

Caption: The Midas cichlid fish from the crater lakes of Nicaragua are one of the the best known examples for sympatric speciation. They evolved from a source population into a variety of independent species in less than 22,000 years.

Caption: Researchers found an increased activity of microRNA in young fish one day after they hatched.