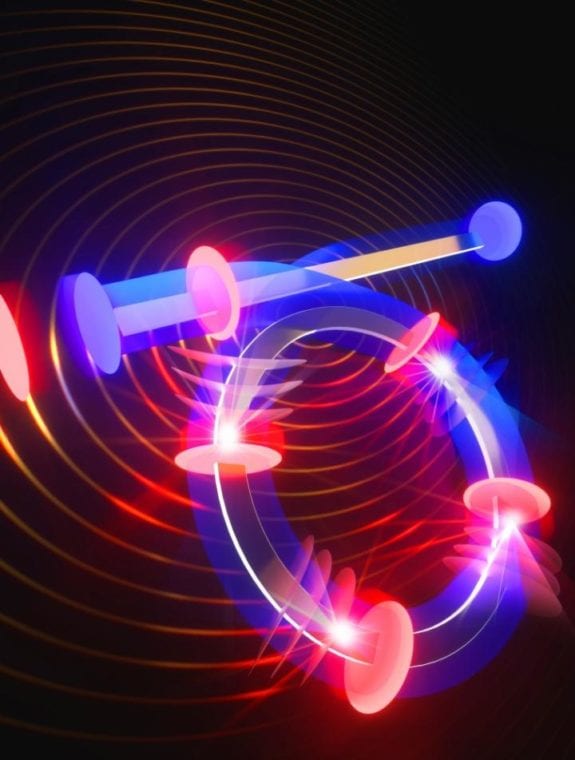 Spectrally pure lasers lie at the heart of precision high-end scientific and commercial applications, thanks to their ability to produce near-perfect single-color light. A laser’s capacity to do so is measured in terms of its linewidth, or coherence, which is the ability to emit a constant frequency over a certain period of time before that frequency changes.

In practice, researchers go to great lengths to build highly coherent, near-single-frequency lasers for high-end systems such as atomic clocks. Today, however, because these lasers are large and occupy racks full of equipment, they are relegated to applications based on bench tops in the laboratory.

There is a push to move the performance of high-end lasers onto photonic micro-chips, dramatically reducing cost and size while making the technology available to a wide range of applications including spectroscopy, navigation, quantum computation and optical communications. Achieving such performance at the chip scale would also go a long way to address the challenge posed by the internet’s exploding data-capacity requirements and the resulting increase in worldwide energy consumption of data centers and their fiber-optic interconnects.

In the cover article of the January 2019 issue of Nature Photonics, researchers at UC Santa Barbara and their collaborators at Honeywell, Yale and Northern Arizona University, describe a significant milestone in this pursuit: a chip-scale laser capable of emitting light with a fundamental linewidth of less than 1 Hz — quiet enough to move demanding scientific applications to the chip scale. The project was funded under the Defense Advanced Research Project Agency’s (DARPA) OwlG initiative.

To be impactful, these low-linewidth lasers must be incorporated into photonic integrated circuits (PICs) — the equivalents of computer micro-chips for light — that can be fabricated at wafer-scale in commercial micro-chip foundries. “To date, there hasn’t been a method for making a quiet laser with this level of coherence and narrow linewidth at the photonic-chip scale,” said co-author and team lead Dan Blumenthal, a professor in the Department of Electrical and Computer Engineering at UC Santa Barbara. The current generation of chip-scale lasers are inherently noisy and have relatively large linewidth. New innovations have been needed that function within the fundamental physics associated with miniaturizing these high-quality lasers.

Specifically, DARPA was interested in creating a chip-scale laser optical gyroscope. Important for its ability to maintain knowledge of position without GPS, optical gyroscopes are used for precision positioning and navigation, including in most commercial airliners.

The laser optical gyroscope has a length-scale sensitivity on par with that of the gravitational wave detector, one of the most precise measuring instruments ever made. But current systems that achieve this sensitivity incorporate bulky coils of optical fiber. The goal of the OwlG project was to realize an ultra-quiet (narrow-linewidth) laser on the chip to replace the fiber as the rotation-sensing element and allow further integration with other components of the optical gyroscope.

According to Blumenthal, there are two possible ways to build such a laser. One is to tether a laser to an optical reference that must be environmentally isolated and contained in a vacuum, as is done today with atomic clocks. The reference cavity plus an electronic feedback loop together act as an anchor to quiet the laser. Such systems, however, are large, costly, power-consuming and sensitive to environment disturbances.

The other approach is to make an external-cavity laser whose cavity satisfies the fundamental physical requirements for a narrow linewidth laser, including the ability to hold billions of photons for a long time and support very high internal optical power levels. Traditionally, such cavities are large (to hold enough photons), and although they have been used to achieve high performance, integrating them on-chip with linewidths approaching those of lasers stabilized by reference cavities has proved elusive.

To overcome these limitations, the research team leveraged a physical phenomenon known as stimulated Brillouin scattering to build the lasers.

“Our approach uses this process of light-matter interaction in which the light actually produces sound, or acoustic, waves inside a material,” Blumenthal noted. “Brillouin lasers are well known for producing extremely quiet light. They do so by utilizing photons from a noisy ‘pump’ laser to produce acoustic waves, which, in turn, act as cushions to produce new quiet, low-linewidth output light. The Brillouin process is highly effective, reducing the linewidth of an input pump laser by a factor of up to a million.”

The drawback is that bulky optical fiber setups or miniature optical resonators traditionally used to make Brillouin lasers are sensitive to environmental conditions and difficult to fabricate using chip-foundry methods.

“The key to making our sub-Hz Brillouin laser on a photonic integrated chip was to use a technology developed at UC Santa Barbara — photonic integrated circuits built with waveguides that are extremely low loss, on par with the optical fiber,” Blumenthal explained. “These low-loss waveguides, formed into a Brillouin laser ring cavity on the chip, have all the right ingredients for success: They can store an extremely large number of photons on the chip, handle extremely high levels of optical power inside the optical cavity and guide photons along the waveguide much as a rail guides a monorail train.”

A combination of low-loss optical waveguides and rapidly decaying acoustic waves removes the need to guide the acoustic waves. This innovation is key to the success of this approach.

Since being completed, this research has led to multiple new funded projects both in Blumenthal’s group and in those of his collaborators.

What’s a better material than plastic in cars, furniture and construction? Trees

Scienmag Sep 13, 2019
Credit: Gemini Observatory/NSF/AURA The first-ever comet from beyond our Solar System has been…