Quantum systems and the flight of the bee

At first glance, a system consisting of 51 ions may appear easily manageable. But even if these charged atoms are only changed back and forth between two states, the result is more than two quadrillion (1015) different orderings which the system can take on. 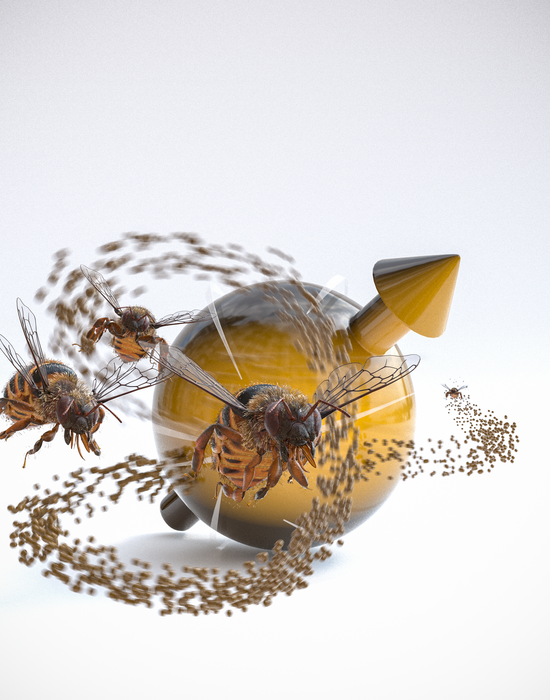 At first glance, a system consisting of 51 ions may appear easily manageable. But even if these charged atoms are only changed back and forth between two states, the result is more than two quadrillion (1015) different orderings which the system can take on.

The behavior of such a system is almost impossible to calculate with conventional computers, especially since an excitation introduced to the system can propagate erratically. The excitation follows a statistical pattern referred to as a Lévy Flight.

One characteristic of such movements is that, in addition to the smaller jumps which are to be expected, also significantly larger jumps take place. This phenomenon can also be observed in the flights of bees and in unusual fierce movements in the stock market.

While simulating the dynamics of a complex quantum system is a very tall order for even traditional super computers, the task is child’s play for quantum simulators. But how can the results of a quantum simulator be verified without the ability to perform the same calculations it can?

Observation of quantum systems indicated that it might be possible to represent at least the long-term behavior of such systems with equations like the ones the Bernoulli brothers developed in the 18th century to describe the behavior of fluids.

In order to test this hypothesis, the authors used a quantum system which simulates the dynamics of quantum magnets. They were able to use it to prove that, after an initial phase dominated by quantum-mechanical effects, the system could actually be described with equations of the type familiar from fluid dynamics.

Furthermore, they showed that the same Lévy Flight statistics which describe the search strategies used by bees also apply to fluid-dynamic processes in quantum systems.

Captured ions as a platform for controlled quantum simulations

The quantum simulator was built at the Institute for Quantum Optics and Quantum Information (IQOQI) of the Austrian Academy of Sciences at The University of Innsbruck Campus. “Our system effectively simulates a quantum magnet by representing the north and south poles of a molecular magnet using two energy levels of the ions,” says IQOQI Innsbruck scientist Manoj Joshi.

“Our greatest technical advance was the fact that we succeeded in individually addressing each one of the 51 ions individually,” observes Manoj Joshi. “As a result we were able to investigate the dynamics of any desired number of initial states, which was necessary in order to illustrate the emergence of the fluid dynamics.”

“While the number of qubits and the stability of the quantum states is currently very limited, there are questions for which we can already use the enormous computing power of quantum simulators today,” says Michael Knap, Professor for Collective Quantum Dynamics at the Technical University of Munich.

“In the near future, quantum simulators and quantum computers will be ideal platforms for researching the dynamics of complex quantum systems,” explains Michael Knap. “Now we know that after a certain point in time these systems follow the laws of classic fluid dynamics. Any strong deviations from that are an indication that the simulator isn’t working properly.”

The research activities were subsidized by the European Community as part of the Horizon 2020 research and innovation program and the European Research Council (ERC); by the German Research Foundation (DFG) as part of the Excellence Cluster Munich Center for Quantum Science and Technology (MCQST); and by the Technical University of Munich through the Institute for Advanced Study, which is supported by funding from the German Excellence Initiative and the European Union. Additional support was provided by the Max Planck Society (MPG) under the auspices of the International Max Planck Research School for Quantum Science and Technology (IMPRS-QST); by the Austrian Science Fund (FWF) and the Federation of Austrian Industries Tyrol.

Authors Prof. Michael Knap (TU Munich) and Prof. Rainer Blatt (University of Innsbruck) are active in “Munich Quantum Valley”, an initiative with the objective of establishing a Center for Quantum Computing and Quantum Technology (ZQQ) over the next five years. Here three quantum computers are to be built based on superconducting qubits as well as qubits from ions and atoms. Members of the Munich Quantum Valley e.V. association include the Bavarian Academy of Sciences and Humanities (BAdW), Fraunhofer (FhG), the German Aerospace Center (DLR), Friedrich-Alexander-Universität Erlangen-Nürnberg (FAU), Ludwig-Maximilians-Universität Munich (LMU), Max Planck Society (MPG) and die Technical University of Munich (TUM).