The study could have applications in spintronics and quantum computing; it was conducted by an international collaboration and published in Nature; its first author is a researcher at the University of São Paulo 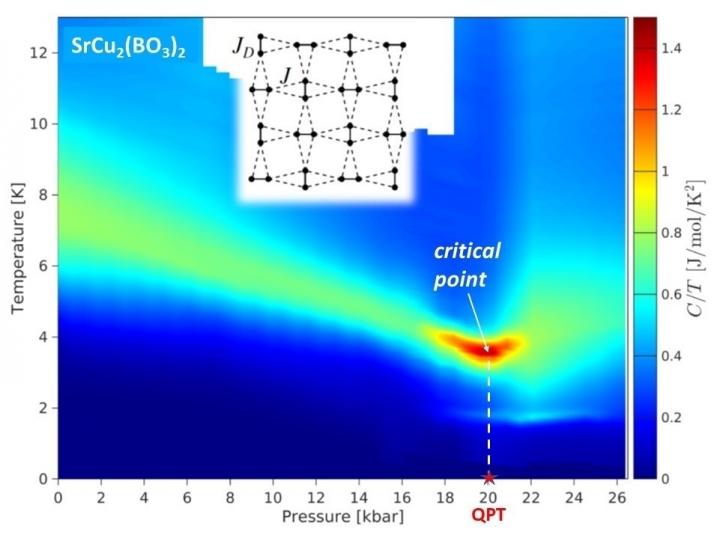 Pure quantum systems can undergo phase transitions analogous to the classical phase transition between the liquid and gaseous states of water. At the quantum level, however, the particle spins in states that emerge from phase transitions display collective entangled behavior. This unexpected observation offers a new avenue for the production of materials with topological properties that are useful in spintronics applications and quantum computing.

The discovery was made by an international collaboration led by Julio Larrea, a professor at the University of São Paulo’s Physics Institute (IF-USP) in Brazil. Larrea is first author of an article on the study published in Nature. The research was supported by FAPESP.

“We obtained the first experimental evidence of a first-order quantum phase transition in a quasi-two-dimensional system consisting entirely of spins. It was a groundbreaking study in terms of both experimental development and theoretical interpretation,” Larrea said.

“The change in the state of water, which occurs at 100 °C under standard atmospheric pressure, is what we call a first-order transition. It is characterized by a discontinuous jump in molecule density. In other words, the number of water molecules per unit volume varies drastically between one state and the other,” Larrea said. “This first-order discontinuous transition evolves in accordance with pressure and temperature until it is fully suppressed at the so-called critical point of water, which occurs at 374 °C and 221 bar. At the critical point, the transition is second-order, i.e. continuous.”

In the vicinity of the critical point, the properties of water behave anomalously, because the density fluctuations are infinitely correlated on the atomic length scale. As a result, the material manifests a unique state that differs both from a gas and a liquid (see Figure 1).

“In quantum matter, the Mott metal-insulator transition is a rare example of a first-order transition. Unlike ordinary metals and insulators, which have free electrons that don’t interact, a Mott state involves strong interaction between electron charges, configuring collective behavior,” Larrea explained. “The energy scales of these interactions are very low, so a first-order quantum phase transition between a metal and an insulator can happen at absolute zero, which is the lowest possible temperature. The interaction between charges varies with temperature and pressure until it is suppressed at the critical point. As the critical point approaches, volume charge density, which is the quantity of charge per unit volume, undergoes such an abrupt change that it can induce new states of matter such as superconductivity.”

In the two examples mentioned, the phenomena involve massive particles such as water molecules and electrons. The question posed by the researchers was whether the concept of phase transition could be extended to massless quantum systems, such as a system made up solely of spins (understood as a quantum manifestation of matter associated with magnetic states). A situation of this kind had never been observed before.

“The material we used was a frustrated quantum antiferromagnet SrCu2(BO3)2,” Larrea said. “We measured the specific heat of small samples under simultaneously extreme conditions of temperature [to 0.1 kelvin], pressure [to 27 kilobar] and magnetic field [to 9 tesla]. Specific heat is a physical property that gives us a measure of the internal energy in the system, and from this, we can infer different types of orderly or disorderly quantum state, and possible electronic states or entangled spin states.”

Obtaining these measurements with the precision required to reveal correlated quantum states, using samples submitted to extremely low temperatures, high pressures and strong magnetic fields, was a formidable experimental challenge, according to Larrea. The experiments were performed in Lausanne, Switzerland, at the Laboratory for Quantum Magnetism of the Federal Polytechnic School of Lausanne (LQM-EPFL), headed by Henrik Rønnow. The precision of the measurements motivated the theoretical collaborators, led by Frédéric Mila (EPFL) and Philippe Corboz (University of Amsterdam), to develop state-of-the-art computational methods with which to interpret the different anomalies observed.

“Our results showed unexpected manifestations of quantum phase transitions in pure spin systems,” Larrea said. “First, we observed a quantum phase transition between two different kinds of entangled spin state, the dimer state [spins correlated at two atomic sites] and the plaquette state [spins correlated at four atomic sites]. This first-order transition ends at the critical point, at a temperature of 3.3 kelvin and pressure of 20 kilobar. Although the critical points of water and the SrCu2(BO3)2 spin system have similar characteristics, the states that emerge near the critical point of the spin system comply with a different description of physics, of the Ising type.” The term Ising refers to a model of statistical mechanics named for German physicist Ernst Ising (1900-98).

“We also observed that this critical point has a discontinuity in magnetic particle density, with triplets or states correlated in different configurations of spin orientation, leading to the emergence of a purely quantum antiferromagnetic state,” Larrea said (see Figure 2).

The next step for Larrea is to find out more about the criticality and entangled spin states that emerge in the vicinity of the critical point, the nature of the discontinuous and continuous quantum phase transitions, and the energy scales that represent the interactions and correlations between electron spins and charges leading to quantum states such as superconductivity. “To this end, we plan to conduct a study with pressures around the critical point and higher pressures,” he said. A new facility, the Laboratory for Quantum Matter under Extreme Conditions (LQMEC), is being set up for this purpose in collaboration with Valentina Martelli, a professor in IF-USP’s Department of Experimental Physics.