Quantifying California’s lithium valley: can it power our EV revolution?

The Salton Sea geothermal field in California potentially holds enough lithium to meet all of America’s domestic battery needs, with even enough left over to export some of it. But how much of that lithium can be extracted in a sustainable and environmentally friendly way? And how long will the resource last? These are just a few of the questions that researchers hope to answer in a new project sponsored by the U.S. Department of Energy (DOE). 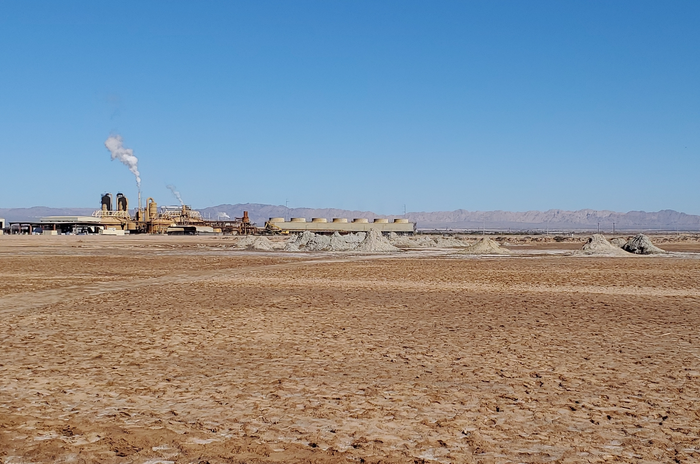 The Salton Sea geothermal field in California potentially holds enough lithium to meet all of America’s domestic battery needs, with even enough left over to export some of it. But how much of that lithium can be extracted in a sustainable and environmentally friendly way? And how long will the resource last? These are just a few of the questions that researchers hope to answer in a new project sponsored by the U.S. Department of Energy (DOE).

There are currently 11 commercial plants at the Salton Sea field producing geothermal energy, a clean, renewable form of energy in which hot fluids are pumped up from deep underground and the heat is then converted to electricity. Normally the cooled fluid would simply be reinjected underground, but the idea is to first extract the lithium from the brine before injecting it back.

With the push by California and many other states and countries to expand adoption of electric vehicles (EVs), the demand for batteries – and the lithium needed to make those batteries – will skyrocket. With nearly $1.2 million in support from DOE’s Geothermal Technologies Office, scientists from Lawrence Berkeley National Laboratory (Berkeley Lab), UC Riverside, and Geologica Geothermal Group, Inc. will work together to both quantify and characterize the lithium in this hypersaline geothermal reservoir, located far beneath the surface of Earth near the Salton Sea in Imperial County.

The project is the first comprehensive scientific effort to map out California’s so-called “Lithium Valley” and attempt to gain a detailed understanding of the mineral-rich underground brine at the Salton Sea geothermal system. Using an electron microscope and other advanced analytical tools, for example, they hope to learn the mineral sources of lithium and whether the rocks will “recharge” the brine with lithium after it has been extracted from the produced fluids.

The project team will also investigate potential environmental impacts – to quantify how much water and chemical usage is needed for lithium extraction, air quality during the extraction process, and potential induced seismicity from the associated geothermal energy production.

“We are excited to fund Berkeley Lab to develop this rich and detailed analysis of the lithium resource potential at the Salton Sea. This project will provide critical insights about the subsurface that will help us secure a domestic lithium supply chain using the most environmentally responsible, data-driven pathway,” said Alexis McKittrick, Program Manager for Hydrothermal Resources in DOE’s Geothermal Technologies Office.

“The Salton Sea geothermal system is the primary potential geothermal resource for lithium in the United States, and it’s a world-class resource,” said Pat Dobson, the Berkeley Lab scientist who is leading the project. “But there is a wide range of estimates in terms of the size of the resource, and also not a great understanding of where the lithium comes from, the rate at which it would decline over time with extraction of lithium from the geothermal brines, and whether it would be replenished by the remaining lithium in the host rocks.”

Currently, most of the world’s lithium supply is either mined from open pit mines, which are common in China and Australia, or extracted from salar deposits, or salt lake flats, in South America. Lithium is obtained from these huge deposits (the largest salar, located in Bolivia, is the size of the “Big Island” of Hawaii) simply by pumping up the shallow groundwater and letting it sit for a year or two while the sun evaporates the water.

But both of these methods have serious environmental issues associated with them. “We think geothermal lithium is one of the least environmentally impactful ways of obtaining lithium,” said Dobson, an expert in geothermal energy and a key contributor to Berkeley Lab’s Lithium Resource Research and Innovation Center. “We want to understand how to mitigate any environmental side effects to make it even more benign.”

The “Saudi Arabia of lithium”

The potential size of the lithium resource at the Salton Sea is staggering. Governor Gavin Newsom recently called California the “Saudi Arabia of lithium,” and the state established the Lithium Valley Commission last year to research and write a report on the opportunities.

UC Riverside geochemist Michael McKibben, who has been studying the Salton Sea geothermal field since the 1970s, agrees with the potential.

“If you do a back-of-the-envelope calculation, you can convince yourself there’s somewhere between 1 and 6 million metric tons of lithium in that field,” he said. “That would be the largest brine source of lithium in the world, bigger than any individual South American salar deposit. So, it’s a big number, and it means the potential is there for – again, back-of-the-envelope calculations – something like 50 to 100 years’ worth of lithium production.”

McKibben, a professor emeritus, and Maryjo Brounce, an assistant professor in the Department of Earth and Planetary Sciences, lead the UC Riverside effort in this project. Brounce, a petrologist by training, will use instrumentation to map out where the lithium is located within the reservoir rocks, and what form it’s in. This geochemical characterization will then be incorporated into models to assess the rate of resupply of lithium to geothermal fluids.

“We’ll look at how quickly might you expect the resource to be regenerated – is it centuries? Decades?” Brounce said. “Those chemical reaction rates will depend on where in the rock lithium is stored pretty strongly, so it can help create a predictive tool.”

This work will complement geochemical studies being conducted by researchers in Europe, who are also investigating the potential of geothermal brines for supplying lithium.

Several companies have started pilot operations at the Salton Sea to extract lithium, including Berkshire Hathaway Energy (BHE) and Controlled Thermal Resources. (Berkeley Lab has projects with both under grants from the California Energy Commission.) For this new project, Berkeley Lab and UC Riverside will use data from companies active in the area as well as published documents and field data from the state of California’s Geologic Energy Management (CalGEM) databases.

“We need better data on the chemistry of the brines and their lithium content and how it’s distributed in terms of position and depth in the geothermal field,” McKibben said. “We’ve asked the geothermal companies to share their brine data with us. Pat and his group will put that in a database. Then if we can use the database to correlate lithium concentration with things like temperature, chlorinity, and other physical and chemical parameters, we can actually predict how much lithium might be in brine in parts of the field that haven’t been completely drilled out yet.”

The vision is that lithium from the geothermal field located near the Salton Sea will one day form the basis for a new domestic battery industry in the United States, generating much-needed economic growth in Imperial County, the county with the lowest per capita income in California.

“We need to get students to understand they can have very lucrative careers involving green energy,” McKibben said. “This is one opportunity to do that.”