Quality of treatment for lung cancer varies widely across US

Treatment for lung cancer is rapidly evolving, with new technologies and research-proven procedures. However, a study from Washington University School of Medicine in St. Louis found the quality of care for lung cancer in the U.S. varies widely, with significantly worse outcomes among patients whose surgeries fall short of established treatment guidelines. 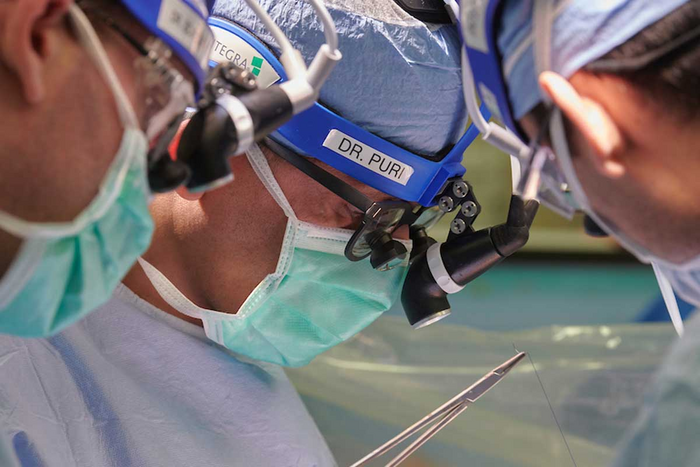 Treatment for lung cancer is rapidly evolving, with new technologies and research-proven procedures. However, a study from Washington University School of Medicine in St. Louis found the quality of care for lung cancer in the U.S. varies widely, with significantly worse outcomes among patients whose surgeries fall short of established treatment guidelines.

To help close the gap in the quality of care, the researchers examined five surgical quality metrics based on guidelines established by the National Comprehensive Cancer Network and other cancer groups, and found that adherence to these quality metrics was associated with improved overall survival rates.

The study is published Jan. 18 in JAMA Surgery.

“It is crucial to have a solid understanding of what constitutes a high-quality lung cancer surgery,” said the study’s senior author, Varun Puri, MD, a Washington University thoracic surgeon and professor of surgery who treats patients at Siteman Cancer Center, based at Barnes-Jewish Hospital and Washington University. “Improving adherence to surgical quality measures is critical to optimize long-term outcomes among patients with early-stage lung cancer seeking treatment intended to cure their cancer.”

Lung cancer is the leading cause of cancer deaths in the United States and is the second most common type of cancer, with non-small cell lung cancer accounting for 84% of all lung cancer cases, according to the American Cancer Society.

The five recommended quality metrics identified by researchers include performing surgery in a timely manner, shortly after diagnosis; determining the appropriate amount of lung tissue to be surgically removed; sampling multiple lymph nodes to confirm the cancer is staged correctly and has not spread to the lymph nodes; using minimally invasive surgery to reduce postsurgical pain and accelerate the recovery process; and ensuring that no cancer is left within the body, also known as a positive margin.

“Ideally, these quality metrics should be met as frequently as possible in any lung cancer surgery,” Puri said. “However, as our data show, adherence to these metrics can be highly variable across the U.S.”

For the study, the researchers analyzed de-identified medical records in a database maintained by the U.S. Veterans Health Administration, the nation’s largest integrated health-care delivery system. The researchers examined information involving 9,628 patients with early-stage non-small cell lung cancer who underwent surgery from Oct. 1, 2006, through Sept. 31, 2016. The researchers developed a surgical quality score reflecting the association between the five metrics and overall survival.

The average age of the VA patients was 67.8 years. The patients were predominantly male and white; however, statistical modeling controlled for different ages, genders and races.

Researchers also studied adherence to quality metrics and overall survival rates among 107,674 nonveteran patients who were listed in the National Cancer Database as patients from 2010 to 2016.

The researchers found poor adherence to several quality measures, both within VA and civilian hospitals. For example, only about one-third of patients in both cohorts received adequate lymph node sampling, and only about 40% received minimally invasive surgery.

“Many patient- and tumor-specific factors can influence the apparent quality of surgical care for lung cancer,” said the study’s first author, Brendan Heiden, MD, a surgical resident and research fellow at Washington University. “Nevertheless, it is important to try to standardize and optimize adherence to quality measures whenever possible. Early-stage lung cancer treatments are rapidly evolving with the introduction of exciting new therapies. Central to these advances, however, is the foundational principle of performing high-quality, evidence-based surgery. As our study demonstrates, adherence to surgical quality metrics can have a disproportionate impact on patients with lung cancer receiving surgical treatment aimed at curing the cancer.”

Quality of treatment for lung cancer varies widely across US