Putting the brakes on heroin relapse

Neuroscientists from the Medical University of South Carolina (MUSC) report in Science Advances that star-shaped brain cells known as astrocytes can “turn off” neurons involved in relapse to heroin. Drug-related cues in the environment can intensify the drive to seek drugs, leading to relapse. In this article, a team led by Peter Kalivas, Ph.D., and Anna Kruyer, Ph.D., both of the Department of Neuroscience, examined how astrocytes interact with neurons and whether astrocytes play an important role in regulating the response to drug cues. 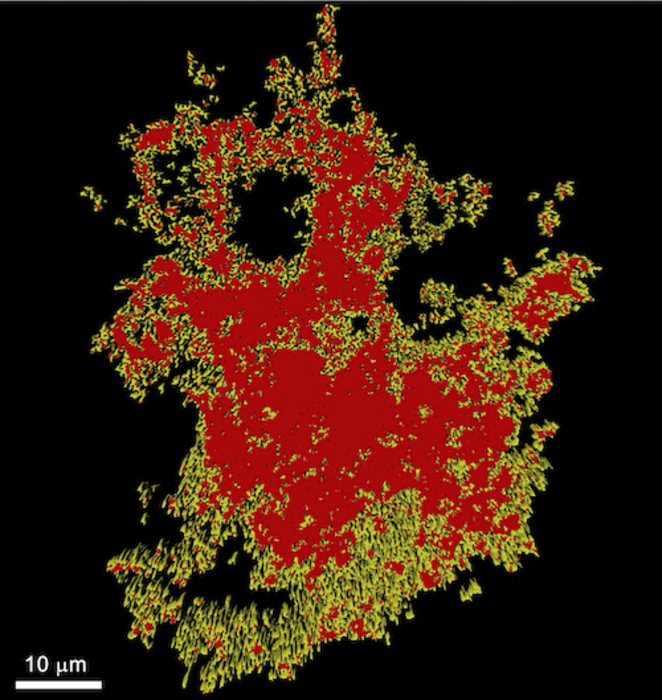 Neuroscientists from the Medical University of South Carolina (MUSC) report in Science Advances that star-shaped brain cells known as astrocytes can “turn off” neurons involved in relapse to heroin. Drug-related cues in the environment can intensify the drive to seek drugs, leading to relapse. In this article, a team led by Peter Kalivas, Ph.D., and Anna Kruyer, Ph.D., both of the Department of Neuroscience, examined how astrocytes interact with neurons and whether astrocytes play an important role in regulating the response to drug cues.

When we learn how to ride a bike or solve a math problem, the messenger cells in our brain, known as neurons, create connections that enable them to communicate better so that we can more easily perform that same task the next time. The same happens when we learn to associate pleasure with harmful substances, like drugs. Neurons send strong messages to each other, motivating us to seek them out again and again.

Another important player in addiction and relapse is the chemical messenger glutamate. Glutamate excites neurons and causes them to fire electrical signals to communicate with one another. The Kalivas Laboratory has been pivotal in establishing the importance of glutamate. Through decades of research, Kalivas has developed the “glutamate hypothesis of addiction,” said Kruyer.

According to that hypothesis, too much glutamate can cause our neurons to fire constantly in response to drug-related environmental cues. That constant firing puts communication between cells into overdrive, encouraging drug-seeking behavior and relapse.

Kalivas and Kruyer found that astrocytes can slow down overactive communication.

“Astrocytes are like a brake in a car and you’re pushing it to stop the glutamate signal,” said Kruyer.

But how exactly do they do it?

To answer that question, the researchers used a well-established model of heroin relapse. In the model, rats first learn to self-administer heroin by pressing a lever. Following the lever press, they receive the drug along with light and sound cues, allowing the rats to associate the cues with the drug. Then, the cue and the drug are removed, mimicking withdrawal. Finally, animals are given access to the cue again, and their lever pressing is a measure of drug-seeking and relapse.

However, fewer astrocytes were available to perform this braking function during the relapse phase, and they were located farther from the neurons. Using a special chemical technology, Kruyer and Kalivas were able to turn astrocytes on and off to change behavior, showing that these star-shaped cells play an important role.

Essentially, when astrocytes surround neurons,” Kruyer explained, “they sop up the glutamate and shut off that synapse,” she said. “However, when they retract from neurons, it is like you lost the brake.”

These findings could provide new insights into how to prevent relapse.

“Since astrocytes in the normal brain undergo two adaptations to suppress relapse, we think they may be a valuable cellular target for development of therapeutics to target relapse in substance use disorder,” said Kruyer.

Previous clinical trials have shown that reducing glutamate alone is not enough to prevent relapse in humans. These findings suggest the possibility that a combination regimen that not only reduces glutamate levels but also accentuates the braking effect of astrocytes could be more successful and warrant further study.

“Historically, neurons have received all of the attention when it comes to behavioral pathologies,” said Kruyer. “Our findings show that we need to take a more holistic view of the nervous system and consider that cell types other than neurons have the capacity to influence behavior and might hold the key to treatment of relapse.”

To set the stage for new astrocyte-based therapies, the Kalivas Lab is trying to identify potential gene targets.

“Many genes express in astrocytes that are not expressed in other brain cells, including neurons,” said Kalivas. “Understanding which of these genes are critical for astrocyte regulation of relapse gives us a handle on how to design drugs that will selectively increase the ability of astrocytes to inhibit relapse. This is an arm of active research in our lab, and we have identified a few astrocyte-selective gene products that may serve as targets in treating substance use disorders.”

Founded in 1824 in Charleston, MUSC is home to the oldest medical school in the South as well as the state’s only integrated academic health sciences center, with a unique charge to serve the state through education, research and patient care. Each year, MUSC educates and trains more than 3,000 students and nearly 800 residents in six colleges: Dental Medicine, Graduate Studies, Health Professions, Medicine, Nursing and Pharmacy. MUSC brought in more than $327.6 million in biomedical research funds in fiscal year 2021, continuing to lead the state in obtaining federal and National Institutes of Health funding, with more than $220 million. For information on academic programs, visit musc.edu.

As the clinical health system of the Medical University of South Carolina, MUSC Health is dedicated to delivering the highest-quality and safest patient care available while training generations of compassionate, competent health care providers to serve the people of South Carolina and beyond. Patient care is provided at 14 hospitals with approximately 2,500 beds and five additional hospital locations in development, more than 300 telehealth sites and nearly 750 care locations situated in the Lowcountry, Midlands, Pee Dee and Upstate regions of South Carolina. In 2021, for the seventh consecutive year, U.S. News & World Report named MUSC Health the No. 1 hospital in South Carolina. To learn more about clinical patient services, visit muschealth.org.