The sight of the stars the first time he peered into a telescope floored Danny Milisavljevic. There, right before his eyes, was an entire universe full of planets and details, unexplored and unexpected. 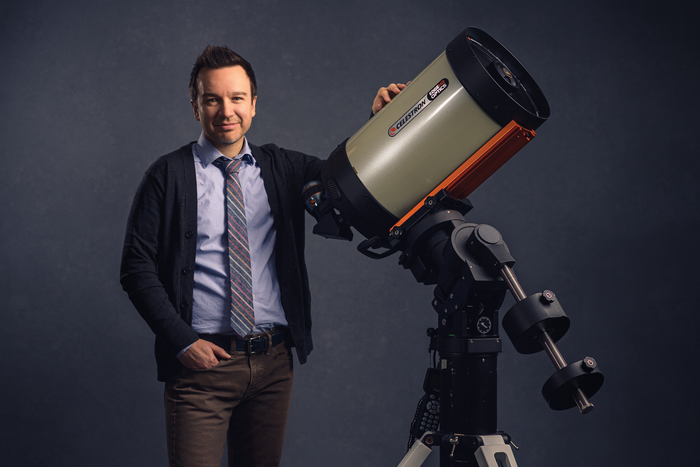 The sight of the stars the first time he peered into a telescope floored Danny Milisavljevic. There, right before his eyes, was an entire universe full of planets and details, unexplored and unexpected.

Now, as an assistant professor of physics and astronomy in Purdue University’s College of Science, Milisavljevic (pronounced milli-sahv-la-vich) is helping bring details from the world’s newest and most powerful telescope: the James Webb Space Telescope (JWST), the successor to the Hubble Space Telescope, which allowed humans to see farther into space and deeper into time.

Since its launch in 1990, discoveries from Hubble have changed humanity’s understanding of the stars, of its place in them and of physics itself. JWST is scheduled to launch at the earliest on Dec. 24. Updates on the launch information online. Milisavljevic and many of his collaborators will watch the launch and provide live commentary on the science and plans for the JWST’s future. Observers from around the world can attend virtually.

The JWST is bigger, is more complex and will orbit farther from the Earth than Hubble, allowing it unprecedented opportunities for interstellar sleuthing. JWST will look even farther into space and time, and with an unprecedented range of wavelengths and strength of definition. The knowledge it uncovers may help scientists take the next small steps out into the universe — and discern where humans want to go next and why.

Milisavljevic leads a team of nearly 40 scientists and researchers from more than 30 institutions — including Harvard, Princeton and Johns Hopkins universities, as well as Los Alamos National Laboratory and the SETI Institute — in studying Cassiopeia A, one of the more puzzling objects in the galaxy. Cassiopeia A comprises the remnants of a supernova explosion and has at its heart a neutron star that doesn’t behave the way scientists think neutron stars ought to behave.

“JWST is going to allow us to look at stellar objects at wavelengths and resolutions we’ve never been able to use before,” Milisavljevic said. “Supernova remnants are leftover explosions — that’s what we’ll be studying. We’ll be able to study what type of star was there before the explosion, the physics of the explosion, the type of dust it generated and what made it all happen. Supernova explosions make all the materials for life — the oxygen we breathe, the iron in our blood.”

JWST is larger than Hubble. Its primary mirror is about 20 feet across, while Hubble’s is just 8 feet across. Hubble’s telescopes looked primarily at objects in the ultraviolet, visual and near-infrared wavelengths. But many objects that astronomers want to see and study — like the universe’s oldest galaxies, exoplanets and stars — are hidden behind swaths of dust. Infrared wavelengths allow scientists to get a clearer view than visual wavelengths of light could give them.

Hubble rode into space aboard the shuttle Discovery. Hubble’s orbit is about 350 miles up. JWST will orbit Earth from nearly a million miles away — four times farther away than the moon and 2,500 times farther out than Hubble.

JWST’s destination is a special spot in space called L2, or the second Lagrange Point. It’s a place where, thanks to the orbital dynamics of Earth, the moon and sun, it will stay in a fixed position with respect to Earth — always keeping Earth between itself and the sun. This is an ideal location from which to observe the universe because the satellite won’t have to use too much of its fuel in adjustments to its orbit, a vital consideration since it will be so far away from its home planet.

The outbound trip will take approximately a month, and the journey will start on one of the European Space Agency’s Ariane 5 rockets. It will launch from the Guiana Space Centre in French Guiana in South America on Dec. 24.

Eyes on the sky

Milisavljevic is collaborating on several JWST projects and is serving as principal investigator in looking at Cassiopeia A, a supernova remnant about 11,000 light-years away.

The project will take place during the first year of JWST’s research, beginning after it reaches L2. JWST will use infrared imaging and spectroscopy to examine Cassiopeia A. Scientists want to study how it formed and look at the neutron star, an X-ray source in the heart of the cloud of star-stuff.

“This proposal, like the telescope itself, has been years in the making,” Milisavljevic said. “Proposals usually take a couple of weeks; this one took years. There are a lot of people involved, with a lot of overlapping and potentially competitive research interests. I was able to convince them that united as an ultimate dream team of investigators, we are stronger than our individual parts.”

Supernovae resulting from collapsing stars are among the most influential phenomena in any galaxy when it comes to building stars and planetary systems. But they are also not at all well understood. Insights into how Cassiopeia A formed will help scientists understand more about how stars live and die, how metals are distributed throughout galaxies, and potentially even probe the origin of life itself.

“One of the things we’re going to be able to do is peer deeply at these objects,” Milisavljevic said. “Having access to mid-infrared wavelengths with the same resolutions possible with existing near-infrared and visual data, allows us for the first time to probe the formation of stellar debris that will give us critical clues about how the explosion proceeded. Up until now, we didn’t have all the components needed for an answer. JWST is giving us the opportunity to observe at wavelengths and resolutions we never have before.”

Purdue engineers and scientists have designed the space systems and equipment that are humanity’s eyes in the sky since the very first American satellites launched. That heritage of space exploration — including footprints left on the moon by Purdue astronauts — is part of what drew Milisavljevic to Purdue.

As a child, Milisavljevic vividly remembers being “beyond the moon” when offered the opportunity to write about the planets of the solar system (nine of them, back then) in a two-pronged folder. As an undergraduate, he continued to study the solar system, helping discover four moons of Uranus — one of which, Ferdinand, he got to name — and five moons of Neptune.

Purdue graduates worked on the rockets that took the first unmanned American satellites —on the heels of Sputnik — into space. They were instrumental in the Mercury, Gemini and Apollo programs as astronauts, researchers and engineers. Drew Feustel, a Purdue astronaut from the same department as Milisavljevic, was on the final mission to fix Hubble and restore its ability to send clearer images back to Earth.

Another Boilermaker had a concrete role in boosting JWST into space. Katherine Gasaway, a current doctoral candidate in the College of Engineering’s School of Aeronautics and Astronautics, was an intern at Northrop Grumman in 2016, where she helped the team working on the structural testing of one of the carbon fiber sun shield beams. Because JWST is going to be so far from Earth, it needs to be as sturdy and fail-proof as possible. No handy space shuttle will be able to easily haul engineers to fix it if something goes amiss.

As with so many other rockets, satellites and telescopes, Purdue hands helped build it, and Purdue eyes will be watching as the Ariane 5 rocket reaches the sky.

“The whole mission is incredibly exciting,” Milisavljevic said. “We are investigating the stars with longer wavelengths of light that is going to let us explore in unprecedented detail. We are going to be able to study things that were impossible to study before.”