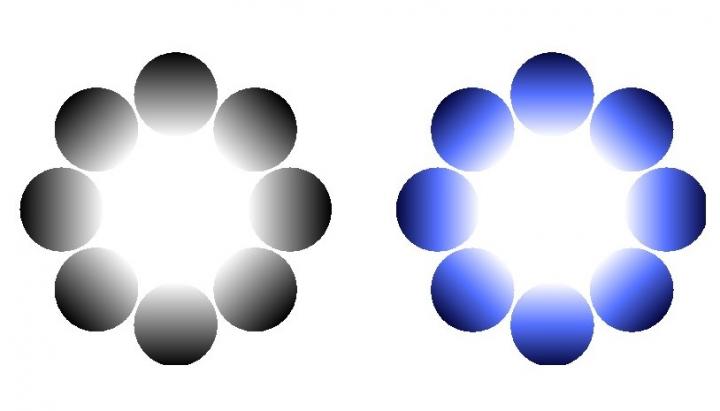 The Department of Computer Science and Engineering at Toyohashi University of Technology formed a research team with the University of Oslo to measure the size of subjects’ pupils when viewing a brightness illusion (glare illusion). The pupil expands (dilates) in dark environments and contracts in bright environments in order to control the amount of light that enters the eye. Pupil contraction is also known to occur when people view a brightness illusion. This study involved showing glare illusions to subjects in a variety of different colors, and concluded that a blue glare illusion was perceived to be the brightest among all the colors and that subjects’ pupils constricted significantly in relation to this perception. The results of this study were published in the Dutch journal, Acta Psychologica on July 6.

The research team hypothesized that the blue glare illusion would be perceived as the brightest because the color blue is most associated with the sky and sunlight typically appears to have a gradient of luminance. In other words, the team surmised that the human visual system often relies on ecologically-based predictions to interpret visual input. The results of this study show that the blue glare illusion was evaluated to be brighter than any other color and that viewing this illusion resulted in significant pupil contraction. This effect is thought to be unique to glare illusions, as it was not observed for visual stimuli without any illusory glare effects.

Lead author and doctoral course student, Yuta Suzuki explains “The pupillary light reflex, in which the pupil constricts and dilates, follows a very concise route in neural processing. The same goes for the pupil responses we saw when subjects viewed the blue glare illusion in this study – the difference of larger pupil constriction among colors occurred with the pupillary light reflex. This may indicate that we have evolved to develop a faster pupillary reaction for illusions in specific colors. We also saw a correlation between pupil contraction and individual brightness perception. We hope to be able to use the pupillary light reflex as a simple tool for evaluating individual differences in brightness perception.”

Professor Shigeki Nakauchi, the Project Leader, mentions that “The pupillary light reflex has drawn attention as a way to investigate a person’s mental state through non-contact measurement. Work involving the pupillary light reflex will create innovative, fundamental technologies that can achieve rapid progress in communication between humans as well as between humans and robots.”

Artificial intelligence to run the chemical factories of the future