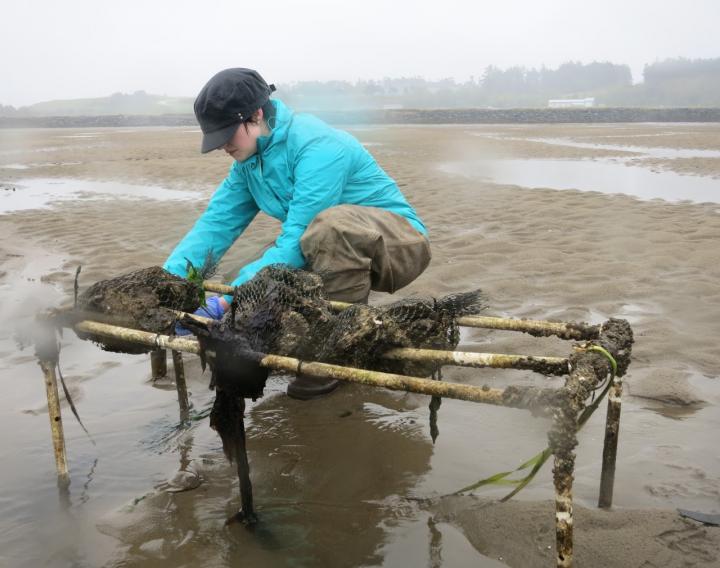 Wastewater treatment facilities clean the water that goes down our sinks and flushes our toilets, but they do not remove everything. A recent study by Portland State researchers detected low levels of pharmaceuticals and personal care product chemicals in oysters the team deployed at various distances from wastewater effluent pipes along the Oregon and Washington coast. Elise Granek, professor of environmental science and management at Portland State University, and Amy Ehrhart, a recent graduate of PSU’s Earth, Environment, and Society doctoral program, conducted the study.

To explore how aquatic pollution varies based on proximity to wastewater facilities, Ehrhart and Granek placed one-week-old Pacific oysters at wastewater sites (not approved by state agencies as oyster growing sites) and near oyster aquaculture sites (approved for growing oysters) along the Oregon and Washington coastline. Nine and twelve months later, they collected the oysters, measured their health and size, and tested their tissues for pharmaceuticals and chemicals called alkylphenols, which are used in a variety of personal care and industrial products. Alkylphenols are endocrine disruptors that can alter the growth and reproduction of aquatic organisms.

Out of the 63 compounds tested, Granek and Ehrhart found only six in the oysters. The two pharmaceuticals detected in the oysters were miconazole, an over-the-counter drug for fungal infections like Athlete’s foot, and virginiamycin, a veterinary antibiotic used in livestock. As expected, the concentrations of pharmaceuticals were higher near the wastewater sites. The condition of the oysters was also poorer at wastewater sites compared to the sites near oyster farms.

Four types of alkylphenols were found in oysters from all the sites.

“This makes sense because they are really ubiquitous,” said Ehrhart. “They’re found in all sorts of common household and industrial products.”

Everyday products like detergents, cosmetics, soaps, and cleaners often contain alkylphenols as do forestry pesticide application mixtures. While detectable, the chemical levels were much lower than reported in other estuarine studies near more populated areas.

“The levels that we found were very low,” Ehrhart said. She noted that the levels detected are significantly lower than the Environmental Protection Agency’s no effect level for nonylphenol exposure in humans and the Food and Drug Administration’s allowable limits for antibiotics in meat. “It’s unlikely to pose a risk to human consumers of shellfish,” she said. Additionally, the Oregon Department of Agriculture and Washington Department of Health continually monitor and approve areas for shellfish growing to ensure they meet strict water quality standards for food safety.

That said, the very presence of these chemicals in oysters relatively far from wastewater sites and in sparsely populated coastal areas suggests that current wastewater treatment technology, stormwater mitigation strategies, and industrial use guidelines for alkylphenol use may not be sufficient. This could be bad news for aquatic animals, including shellfish.

“It’s not an aquaculture-driven problem. It’s coming from upstream, but it’s making its way to aquaculture and it may be negatively affecting oysters, given other studies on how alkylphenols can affect animals,” says Granek. “So it really points to a need to address the sources of these alkylphenols.”

Granek suggested that possible solutions for this kind of aquatic pollution include upgrading wastewater treatment plants and creating regulations that target the use of industrial products containing alkylphenols.

Individuals can also do their part by not flushing medications down sinks or toilets and instead using drop boxes available at many pharmacies.

“For the pharmaceuticals it’s better disposal, for the alkylphenols it’s buying products that don’t have them,” said Ehrhart.

It can be difficult to determine which products contain alkylphenols just from reading ingredient lists, so Ehrhart suggests looking for the EPA’s Safer Choice label. “If you see that on cleaning products and detergents, that means that those products don’t have alkylphenols, so they are better for the environment.”

The study was published in Marine Pollution Bulletin on June 20.