AUGUSTA, Ga. (Oct. 18, 2022) – Studies have suggested that psoriasis is an independent risk factor for heart attack in the general population, but investigators have made the surprising finding that in people who also have end-stage renal disease, which shares many risk factors with heart disease, it is not. 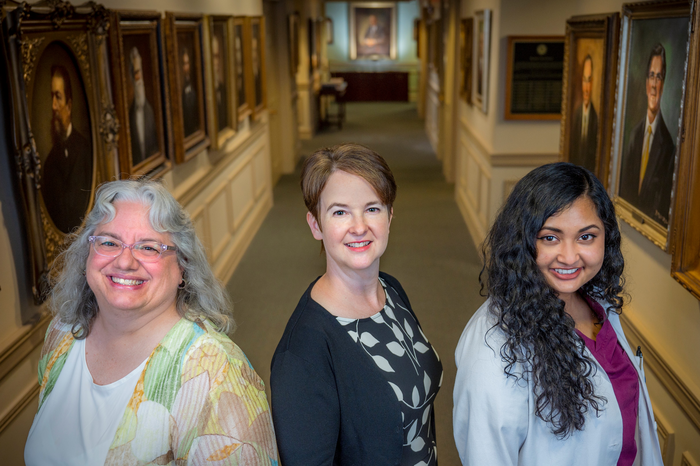 AUGUSTA, Ga. (Oct. 18, 2022) – Studies have suggested that psoriasis is an independent risk factor for heart attack in the general population, but investigators have made the surprising finding that in people who also have end-stage renal disease, which shares many risk factors with heart disease, it is not.

“There are a lot of things that contribute to MI and our target population has a lot of them,” says Dr. Wendy B. Bollag, cell physiologist in the Department of Physiology at the Medical College of Georgia at Augusta University.

“We were asking: Is the population with end-stage renal disease that also has psoriasis at increased risk for a heart attack and they weren’t,” says Bollag, corresponding author of the study in The American Journal of the Medical Sciences.

Investigators at MCG and the Charlie Norwood VA Medical Center queried the United States Renal Data System for patients with end-stage renal disease, or ESRD, who started dialysis between 2004-15, had at least two diagnoses of psoriasis (they wanted two to help ensure a proper diagnosis since psoriasis is both underdiagnosed and misdiagnosed), a diagnosis of a heart attack, or myocardial infarction, and other risk factors for heart disease.

They found that 24% of the 6,283 patients with ESRD and psoriasis — 1,671 individuals — also had an MI, a significant percentage that again suggested an increased risk. These individuals were mostly white, male and on hemodialysis and the investigators expected to find a pretty direct associated risk.

In fact, when coauthor and MCG biostatistician Dr. Jennifer Waller examined the data without accounting for demographics like race and the numerous so-called comorbid conditions, psoriasis looked again like an independent risk factor for MI as previous studies indicated.

But when Waller controlled for those other risk factors, “psoriasis fell out,” Bollag says.

“I think the confounding variables affect both the exposure, which is psoriasis, and the outcome, which is MI, so that kind of blurs the relationship between the two,” says first author, MCG medical student Naomi Siddiquee.

Patients with psoriasis are considered at increased risk for both chronic kidney disease and ESRD. Inflammation is a significant factor in all those conditions as well as heart disease. In fact, many of the same immune cell types are involved in psoriasis and heart disease.

To better understand how the conditions might work together against patients, they used the Charlson Comorbidity Index, which predicts 10-year survival in patients with multiple “comorbidities,” basically two or more conditions from a long list of problems like diabetes and high blood pressure, the two most common causes of chronic kidney disease, to identify conditions that could impact or otherwise worsen a patient’s condition. This also includes problems like stroke, congestive heart failure, dementia, pulmonary disease, mild liver disease, tobacco use and cancer, as well as an MI. For this study the investigators controlled for all those except MI, and they only looked at conditions that occurred since the patient started dialysis for kidney failure and before their heart attack.

They suspect that their adjustments for more conditions in order to really hone in on psoriasis’ impact on MI in patients with ESRD, likely helps explain the differences between what they and others have found.

While other studies have been prospective, which means following people and seeing if they had heart attacks, the fact that they looked retrospectively at these conditions in a large database meant they could better control for the myriad of other factors that also might contribute to an MI, Bollag says. “We might have controlled for a lot more factors than other studies,” adds Siddiquee.

The fact that the database they used did not indicate the severity of psoriasis or whether or how it was being treated — it’s often undertreated — might also help explain what they found, she says. Siddiquee noted that previous studies have logically noted more severe psoriasis produces more increased internal inflammation.

They did find evidence to support a relationship between psoriasis and congestive heart failure, as well as the known independent association between heart failure and heart attacks, and the investigators recommend patients with ESRD and psoriasis get annual evaluations of their cardiovascular risk factors.

While psoriasis is widely viewed as a skin disorder that may also affect the joints, there is increasing evidence its effect is more widespread in the body. In fact, severe psoriasis can shorten the lifespan by five years and cardiovascular disease is considered a big contributor.

ESRD, which is on the increase in the United States, leaves patients reliant on either some type of dialysis or a kidney transplant to help restore key kidney functions like filtering toxins out of the blood so they can be eliminated in the urine. The majority of the patients whose data they examined were on dialysis.

The investigators reported last year in The American Journal of the Medical Sciences that patients on dialysis who also have psoriasis are at increased risk of infection and that proper treatment of their skin condition could reduce infection risk and death.

The American Journal of the Medical Sciences