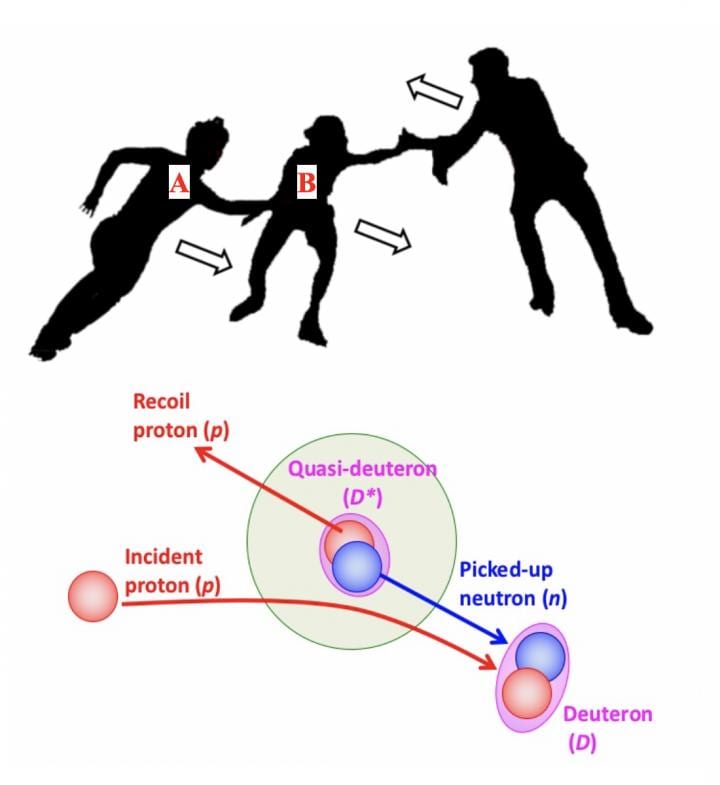 Osaka, Japan – The nuclear force that holds protons and neutrons together in the center of atoms has a non-central component — the tensor force, which depends on the spin and relative position of the interacting particles.

The importance of the tensor force has been observed in the binding energies of light particles, but as of yet their effect on nuclear structure has not been studied in a more direct manner. Previous experiments in the field have demonstrated either the ability to detect the necessary particles, or the resolution required to probe this nuclear force component. However, none have shown both the resolution and the ability to link the observed large momentum transfer of the proton-neutron pairs (or nucleon pair) to nuclear structure.

Now, an international research collaboration including Osaka University has reported the first evidence on the relation between strongly correlated proton-neutron pairs in an atomic nucleus induced by the tensor interactions and the nuclear structure. The researchers used a proton scattering experiment to capture the strong interaction of proton-neutron pairs with moderate energy resolution of the final states. By measuring the simultaneous occurrences of deuterons (particles consisting of one proton and one neutron) and protons traveling in opposite directions, they have been able to show the dominance of particular nuclear structures. Their findings were published in Physical Review Letters.

“The behavior we have detected can be likened to a pair of skaters executing a spin–one of them represents a proton and the other represents a neutron,” study author Hooi Jin Ong explains. “If a third skater (another proton) approaches at the correct velocity and picks up the neutron, they travel off together in one direction and the effect of them moving off causes the original proton to travel in the opposite direction. Detecting and analyzing such an event leads to information on the nuclear structure.”

“Our data, acquired on the GRAF beam line at the Osaka cyclotron facility, are the first to demonstrate this behavior at large momentum transfer,” study first author Satoru Terashima says. “We hope that our findings will be useful not only to nuclear physicists, but also to researchers working in a variety of fields, particularly astrophysics.”

It is expected that improving our understanding of how the neutron and proton pairing affects nuclear structure, namely the energy levels and the magic number (the number of protons and neutrons that provides nuclei with considerably greater stability than other combinations) will lead to a better understanding of the internal structures of neutron stars and other celestial bodies.

The article, “Dominance of Tensor Correlations in High-Momentum Nucleon Pairs Studied by (p,pd) Reaction” was published in Physical Review Letters at DOI: https://doi.org/10.1103/PhysRevLett.121.242501