Mammals convert the energy stored in adipose (fat) tissue into heat via a process known as thermogenesis. This process is regulated by a family of signaling proteins called sirtuins. A recent study by researchers from Kumamoto University reveals the mechanism through which the protein Sirtuin 7 suppresses thermogenesis in mice. These findings may pave the way for new therapies that target diseases caused by metabolic dysregulation. 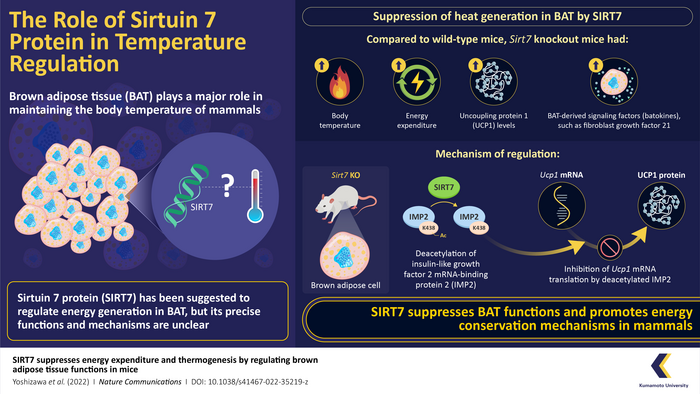 Mammals convert the energy stored in adipose (fat) tissue into heat via a process known as thermogenesis. This process is regulated by a family of signaling proteins called sirtuins. A recent study by researchers from Kumamoto University reveals the mechanism through which the protein Sirtuin 7 suppresses thermogenesis in mice. These findings may pave the way for new therapies that target diseases caused by metabolic dysregulation.

Mammals regulate their internal body temperature by turning energy stored as fat in adipose tissues into heat. Brown adipose tissue (BAT) plays a crucial role in this process, which is known as tissue thermogenesis. BAT thermogenesis needs to be tightly regulated since heat production is beneficial in some conditions, like cold environments, but detrimental in others, like during starvation or sleep. The balance between the suppression and activation of BAT thermogenesis also has long-term implications on factors such as body mass index and glucose levels in adult humans. This careful regulation of BAT thermogenesis is largely controlled by a family of signaling proteins called sirtuins. Previous literature has shown that sirtuins 1–6 (SIRT1–6) facilitate BAT thermogenesis, but thus far, there has been little information on the role the seventh family member, sirtuin 7 (SIRT7) plays.

Now, in a new study published in Nature Communications, researchers have revealed that SIRT7 suppresses BAT thermogenesis in mice. As a part of their study, they bred multiple lines of “Sirt7 knockout mice,” i.e., mice that were genetically modified to not produce or produce non-functional SIRT7. They found that these Sirt7 knockout mice exhibited higher body temperatures and energy expenditure than their counterparts with SIRT7. “Although several sirtuins positively participate in the regulation of BAT functions, we revealed that SIRT7 clearly plays the opposite role in BAT thermogenesis. Our results demonstrated that SIRT7 deficiency in brown adipocytes (fat cells) leads to higher energy expenditure both in vitro and in vivo,” remarked Professor Tatsuya Yoshizawa of Kumamoto University in Japan, the lead author of the paper.

Mammals often go through phases of low activity, such as hibernation or torpor—a shorter version of hibernation that lasts for hours when food is scarce. The body temperature of mice drops considerably during torpor to conserve energy. In the study, however, SIRT7 knockout mice had significantly higher body temperatures than wild-type mice during this phase. The finding suggests that SIRT7 helps mice reduce the loss of energy during periods of regular activity, as well as periods of low metabolic activity.

The study also revealed that SIRT7 affects thermogenesis by limiting the production of another protein, uncoupled protein 1 (UCP1). UCP1 is a positive thermogenesis regulator that facilitates energy conversion into heat. The researchers observed that the knockout mice in the study had a significantly higher concentration of this protein than wild-type mice. They further uncovered the molecular pathway through which SIRT7 suppressed the expression of UCP1, which notably involves an intermediary protein called insulin-like growth factor 2 mRNA-binding protein 2 (IMP2). “Our findings reveal that SIRT7 deacylates IMP2. Deacylated IMP2 binds much more strongly to the Ucp1 mRNA, thereby inhibiting its translation into the UCP1 protein, and subsequently BAT thermogenesis,” explains Prof. Yoshizawa.

BAT thermogenesis is generally accepted to have health benefits, specifically for individuals who consume excess nutrients, or have obesity or other metabolic disorders. More recent studies indicate that it also contributes to the development and progression of hypermetabolic conditions, such as cancer, burns, and infectious diseases. The findings from this study, specifically with respect to SIRT7 as a key regulator of BAT thermogenesis, will find application in the development of new targets and therapies for the treatment of these diseases and disorders.