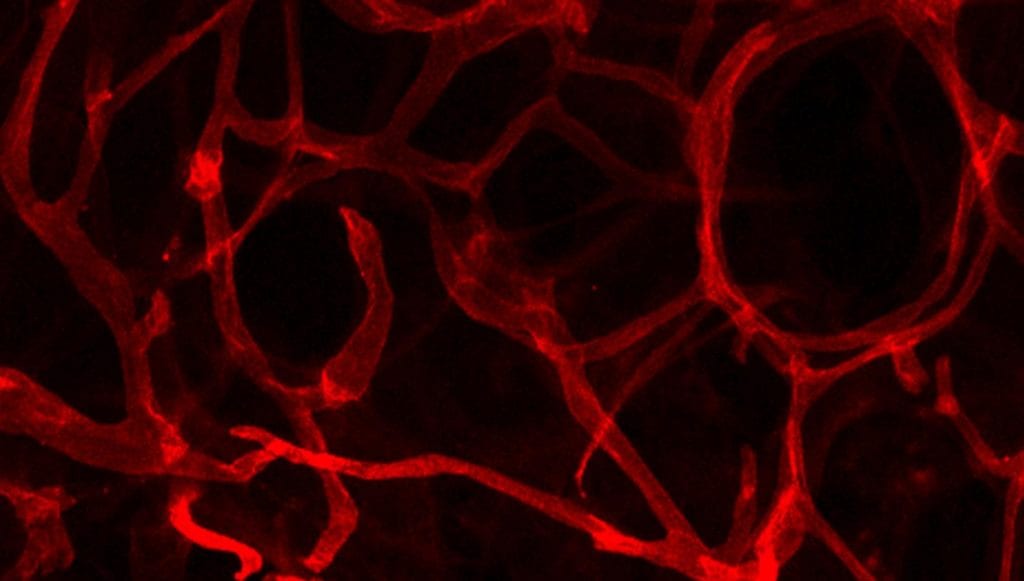 Tara Haas, a professor in the School of Kinesiology & Health Science at York University, and a team including first author Martina Rudnicki, a post-doctoral fellow in the Haas lab, investigated a process of the vascular system called angiogenesis. Angiogenesis is the formation of tiny blood vessels called capillaries. It helps to maintain normal healthy functions in tissue, particularly when that tissue enlarges. However, when the tissue expands as it stores excess fat, angiogenesis is repressed and new capillaries fail to grow. This results in unhealthy adipose tissue, which increases the risk of developing diabetes and cardiovascular diseases.
“It is not clear why exactly new capillaries fail to form in obesity,” says Haas.

Previous research led by Haas found that in obesity, the levels of FoxO1 increase in endothelial cells, which are the main cells that comprise capillaries.
“What we know is that a protein called FoxO1 is present in the cells that line the inside of blood vessels, and that it can stop the development of new capillaries. FoxO1 controls how cells spend their energy and it can force them to go into a resting state. During obesity, the levels of FoxO1 increase in capillary endothelial cells. Therefore, it may be possible that FoxO1 prevents new blood vessels from growing in the fat tissues of obese individuals,” says Haas.

The team inhibited the production of FoxO1 protein and monitored the behaviour of capillary endothelial cells and the resultant influences of these changes on the expansion of adipose tissue. The study found that lowering FoxO1 levels promoted angiogenesis and caused a healthier adipose tissue – in particular, with a high-fat diet. Lower levels of endothelial cell FoxO1 also led to an increase in the use of glucose, and less weight gain, despite consuming a diet high in fat.

“While we anticipated that improving angiogenesis in adipose tissue would make the adipose healthier, we were surprised that altering the levels of a particular protein, FoxO, in endothelial cells exerted such a broad influence on whole-body glucose levels and weight gain. This led us to propose the novel concept that the activity of endothelial cells can alter whole-body energy balance.”

Haas said the research showed that removing FoxO1 made endothelial cells ‘hyper-active,’ and that this enabled the formation of a lot of new blood vessels in the fat tissue. At the same time, these blood vessels consumed a lot of energy, and this in fact could alleviate common health problems that accompany obesity, such as high levels of blood glucose and circulating fats, which are risk factors for diabetes and cardiovascular disease.

York University champions new ways of thinking that drive teaching and research excellence. Through cross-disciplinary programming, innovative course design, diverse experiential learning and a supportive community environment, our students receive the education they need to create big ideas that make an impact on the world. Located in Toronto, York is the third largest university in Canada, with a strong community of 53,000 students, 7,000 faculty and administrative staff, and more than 300,000 alumni. York U’s fully bilingual Glendon Campus is home to Southern Ontario’s Centre of Excellence for French Language and Bilingual Postsecondary Education.