Hamilton, ON (Oct. 27, 2021) – A study out of the Michael G. DeGroote Institute for Infectious Disease Research at McMaster University has resulted in the discovery of a promising new antimalarial compound. 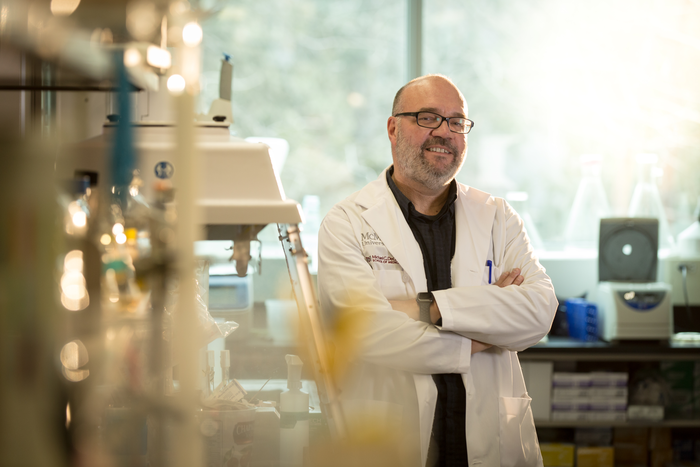 Hamilton, ON (Oct. 27, 2021) – A study out of the Michael G. DeGroote Institute for Infectious Disease Research at McMaster University has resulted in the discovery of a promising new antimalarial compound.

Co-led by Gerry Wright, professor of biochemistry & biomedical sciences, the discovery opens the door to the development of new drugs targeting malaria, one of the deadliest infectious diseases on the planet.

Collaborating with professor Tim Gilberger of the University of Hamburg in Germany, the researcher teams performed a screen of soil bacteria extracts for antimalarials and identified an extremely potent inhibitor of malaria development.

“We’ve shined a new light here,” said Wright, the inaugural lead of Canada’s Global Nexus for Pandemics and Biological Threats at McMaster. “We’re looking at a part of chemistry that nobody has ever looked at before.”

Drug resistance in malaria is becoming “a huge problem,” he said, and climate change is pushing malaria-carrying mosquitoes to new places, broadening the disease’s spread. The World Health Organization estimates that malaria was responsible for more than 400,000 deaths and 229 million infections in 2019 alone.

Wright said that the family of compounds under study — duocarmycins — have been known to kill malaria and cancer cells for some time; however, they are extremely toxic to humans. As such, using them as treatment comes with considerable collateral damage, which has resulted in many failed clinical trials. Wright calls these compounds ‘anti-life,’ since they kill just about everything in their path.

However, PDE-I2, the new compound molecule discovered by the McMaster-Hamburg team, appears to come with all of the potent malaria-killing properties of previously known duocarmycins — just without the adverse effects.

Wright said the discovery was a decade in the making, beginning when he and Gilberger worked together at McMaster between 2010 and 2014.

Since then, the Wright laboratory has been sending thousand of sub-fractions from Hamilton to Hamburg, where Gilberger and his team would assay them against malaria parasites at the Bernhard Nocht Institute for Tropical Medicine.

It was years of trial-and-error before the researchers finally fractionated the right molecule — a process Wright likens to finding a needle in a haystack.

“This novel compound represents a useful scaffold for anti-malaria therapy,” said Gilberger, who added that he is excited to explore its efficiency in systemic infections and to pinpoint its mode of action.

The main funding for the research study came from the Canadian Institutes for Health Research.

Pictures of Gerry Wright and Tim Gilberger may be found at https://bit.ly/3pGwm6C

The authors declare no competing interests