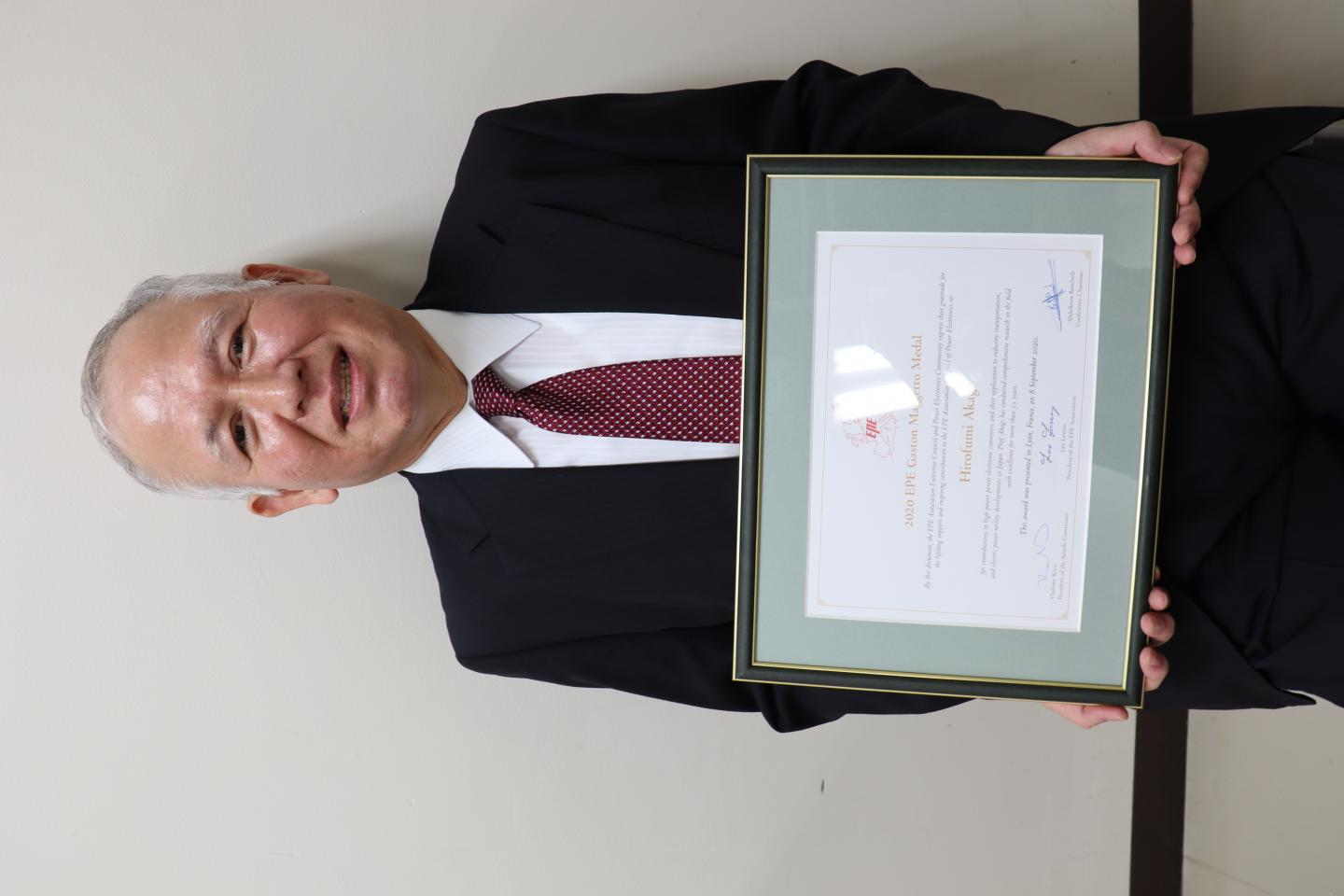 On September 8, Professor Emeritus Hirofumi Akagi of Tokyo Institute of Technology (currently a Specially Appointed Professor at the Innovator and Inventor Development Platform) won the 2020 EPE Gaston Maggetto Medal, the highest award given by the European Power Electronics and Drives Association (EPE). In 2018, Akagi was the first Japanese person to receive the Institute of Electrical and Electronics Engineers (IEEE) Medal in Power Engineering, the highest honor given by the IEEE, which is the world’s largest international technical organization in the field of electrical and electronic engineering. In this way, Akagi realized the illustrious achievement of becoming the first person in the world to receive the highest awards from both EPE and IEEE.

The EPE was founded in 1983. It is headquartered in Brussels, Belgium, as an international organization with focus on power electronics technology and its applications. Since 1985, the EPE has hosted the Conference on Power Electronics and Applications, an international event.

The medal bears the name of Professor Gaston Maggetto (Free University of Brussels (ULB), 1939 to 2007), a pioneering researcher in electric vehicles in Europe and the first president of the EPE. According to the EPE, the Gaston Maggetto Medal is the highest award given by the EPE.

The medal was awarded to Akagi in recognition of his research on power electronics, especially his many years of achievements in large-capacity power conversion systems and their application to industry, transportation, and electric power utility.

Akagi is the second Japanese recipient of this award, following Eisuke Masada (Professor Emeritus of the University of Tokyo, former Chairman of the Railway Technical Research Institute) in 2018.

One day, I received an unexpected email from the EPE Administrative Department confirming that I had been selected for the medal. I was surprised and overjoyed. I am not sure who nominated me for the medal, but I guess that was a certain German university professor. In addition to the person who nominated me for the award, I would also like to thank my colleagues, graduate students, and everyone else who has supported me. While in charge of career education as a Specially Appointed Professor of the Innovator and Inventor Development Platform at Tokyo Institute of Technology, I would like to continue research on power electronics as my lifework.

Tokyo Tech stands at the forefront of research and higher education as the leading university for science and technology in Japan. Tokyo Tech researchers excel in fields ranging from materials science to biology, computer science, and physics. Founded in 1881, Tokyo Tech hosts over 10,000 undergraduate and graduate students per year, who develop into scientific leaders and some of the most sought-after engineers in industry. Embodying the Japanese philosophy of “monotsukuri,” meaning “technical ingenuity and innovation,” the Tokyo Tech community strives to contribute to society through high-impact research.
https://www.titech.ac.jp/english/