Ammonia is commonly used in fertilizer because it has the highest nitrogen content of commercial fertilizers, making it essential for crop production. However, two carbon dioxide molecules are made for every molecule of ammonia produced, contributing to excess carbon dioxide in the atmosphere. 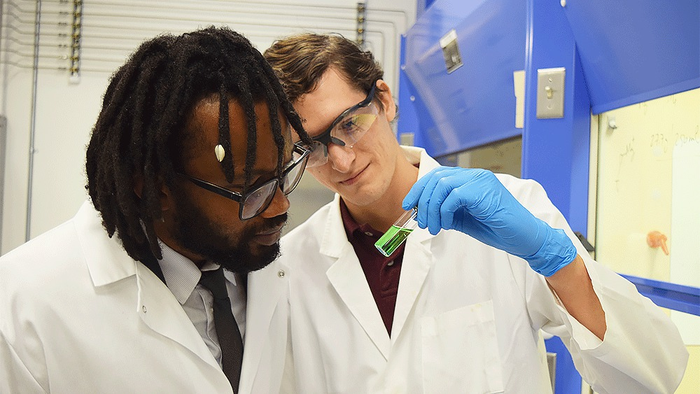 Ammonia is commonly used in fertilizer because it has the highest nitrogen content of commercial fertilizers, making it essential for crop production. However, two carbon dioxide molecules are made for every molecule of ammonia produced, contributing to excess carbon dioxide in the atmosphere.

A team from the Artie McFerrin Department of Chemical Engineering at Texas A&M University consisting of Dr. Abdoulaye Djire, assistant professor, and graduate student Denis Johnson, has furthered a method to produce ammonia through electrochemical processes, helping to reduce carbon emissions. This research aims to replace the Haber-Bosch thermochemical process with an electrochemical process that is more sustainable and safer for the environment.

The researchers recently published their findings in Nature Scientific Reports.

Since the early 1900s, the Haber-Bosch process has been used to produce ammonia. This process works by reacting atmospheric nitrogen with hydrogen gas. A downside of the Haber-Bosch process is that it requires high pressure and high temperature, leaving a large energy footprint. The method also requires hydrogen feedstock, which is derived from nonrenewable resources. It is not sustainable and has negative implications on the environment, expediting the need for new and environmentally friendly processes.

The researchers have proposed using the electrochemical nitrogen reduction reaction (NRR) to produce ammonia from atmospheric nitrogen and water. The benefits of using an electrochemical method include using water to provide protons and the ability to produce ammonia at ambient temperature and pressure. This process would potentially require lower amounts of energy and would be less costly and more environmentally friendly than the Haber-Bosch process.

The NRR works by using an electrocatalyst. For this process to succeed, nitrogen must bond to the surface and break apart to produce ammonia. In this study, the researchers used MXene, a titanium nitride, as the electrocatalyst. What differentiates this catalyst from others is that nitrogen is already in its structure, allowing for more efficient ammonia formulation.

The researchers found that using titanium nitride induces a Mars-van Krevelen mechanism, a popular mechanism for hydrocarbon oxidation. This mechanism follows a lower energy pathway that would allow for higher ammonia production rates and selectivity because of the nitrogen from the titanium nitride catalyst.

“The Department of Energy has set a goal of a selectivity of 60%, which is a challenging number to reach,” said Johnson. “We were able to reach 20% using our material, showcasing a method that we might be able to take advantage of moving forward. If we upgrade our material, can we reach 60% soon? That is the question we will continue to work to answer.”

This research could potentially reduce the carbon footprint and global energy usage on a larger scale.

“In the future, this could be a major scientific reform,” said Djire. “About 2% of the world’s total energy is used for ammonia production. Reducing that huge number would drastically reduce our carbon footprint and energy consumption.”

This study was funded by the Startup Research Fund. Other contributors to the publication are Eric Kelley from the chemical engineering department at Texas A&M, Brock Hunter from Auburn University, and Jevaun Christie and Cullan King from Prairie View A&M University.