Prodrug that hides like an assassin to kill cancer cells

Assassins conceal their weapons and instantly pull them out as they approach their target to attack. Like these assassins, a drug has been developed that finds and attacks cancer cells. 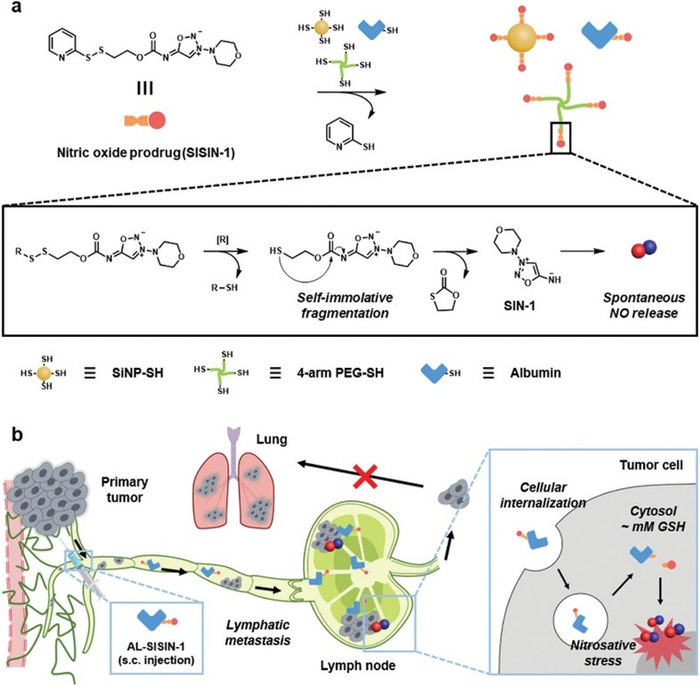 Assassins conceal their weapons and instantly pull them out as they approach their target to attack. Like these assassins, a drug has been developed that finds and attacks cancer cells.

A research team led by Professor Won Jong Kim of POSTECH’s Department of Chemistry has developed a lymph-directed self-immolative nitric oxide prodrug that is readily conjugated to the protein albumin to remove cancer cells in lymph nodes. Prodrugs are drugs that need to be metabolized in the body to be therapeutic.

Since nitric oxide (NO) can trigger various biological reactions in the body, studies have been conducted to use it for anti-cancer therapy. However, conventional NO drugs are difficult to apply as treatment since they spontaneously release NO gas due to their innate structural instability.

The drug developed by Professor Kim’s team is unique in that it selectively reacts with strong reductants (i.e., glutathione) inside the body to release nitric oxide. In this study, using the property of albumin that enables rapid drainage into the lymph nodes, the prodrug is able to eliminate cancer cells located in the tumor-draining lymph nodes.

Unlike conventional NO prodrugs, the newly developed prodrug does not spontaneously decompose when it comes in contact with water, rendering it easy to store or transport. Side effects are also significantly lower compared to performing lymph node removal surgeries. The drug also shows high potential to be commercialized since 3-morpholinosydnonimine hydrochloride (SIN-1) – a component of the drug – has already been used clinically and albumin is also a protein present in the body.

“The self-immolative nitric oxide prodrug can minimize the side effects of nitric oxide and maximize its therapeutic effects,” explained Professor Won Jong Kim who led the study. He noted, “It will be applicable in the prevention and treatment of cancer, autoimmune diseases, intractable neurological diseases, and infectious diseases in the future.”

Published on January 5 in Advanced Science – an authoritative international academic journal – the study was conducted as an academia-industry collaborative project with OmniaMed Co., Ltd. and supported by the Basic Research Program and Creative Materials Discovery Program of the National Research Foundation of Korea.