A promising method for producing and observing on Earth a process important to black holes, supernova explosions and other extreme cosmic events has been proposed by scientists at Princeton University’s Department of Astrophysical Sciences, SLAC National Acceleraor Laboratory, and the U.S. Department of Energy’s (DOE) Princeton Plasma Physics Laboratory (PPPL). The process, called quantum electrodynamic (QED) cascades, can lead to supernovas – exploding stars – and fast radio bursts that equal in milliseconds the energy the sun puts out in three days. 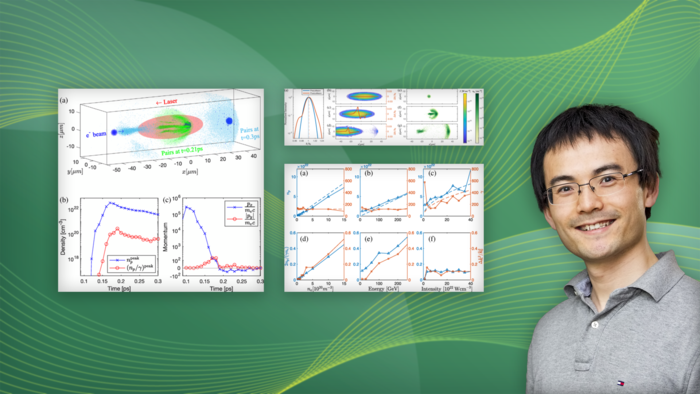 A promising method for producing and observing on Earth a process important to black holes, supernova explosions and other extreme cosmic events has been proposed by scientists at Princeton University’s Department of Astrophysical Sciences, SLAC National Acceleraor Laboratory, and the U.S. Department of Energy’s (DOE) Princeton Plasma Physics Laboratory (PPPL). The process, called quantum electrodynamic (QED) cascades, can lead to supernovas – exploding stars – and fast radio bursts that equal in milliseconds the energy the sun puts out in three days.

The researchers produced the first theoretical demonstration that colliding a laboratory laser with a dense electron beam can produce high-density QED cascades. “We show that what was thought to be impossible is in fact possible,” said Kenan Qu, lead author of a paper in Physical Review Letters (PRL) that describes the breakthrough demonstration. “That in turn suggests how previously unobserved collective effects can be probed with existing state-of-the-art laser and electron beam technologies.”

The process unfolds in a straightforward manner. Colliding a strong laser pulse with a high energy electron beam splits a vacuum into high-density electron-positron pairs that begin to interact with one another. This interaction creates what are called collective plasma effects that influence how the pairs respond collectively to electrical or magnetic fields.

Plasma, the hot, charged state of matter composed of free electrons and atomic nuclei, makes up 99 percent of the visible universe. Plasma fuels fusion reactions that power the sun and stars, a process that PPPL and scientists around the world are seeking to develop on Earth. Plasma processes throughout the universe are strongly influenced by electromagnetic fields.

The PRL paper focuses on the electromagnetic strength of the laser and the energy of the electron beam that the theory brings together to create QED cascades. “We seek to simulate the conditions that create electron-positron pairs with sufficient density that they produce measurable collective effects and see how to unambiguously verify these effects,” Qu said.

The tasks called for uncovering the signature of successful plasma creation through a QED process. Researchers found the signature in the shift of a moderately intense laser to a higher frequency caused by the proposal to send the laser against an electron beam. “That finding solves the joint problem of producing the QED plasma regime most easily and observing it most easily,” Qu said. “The amount of the shift varies depending on the density of the plasma and the energy of the pairs.”

Theory previously showed that sufficiently strong lasers or electric or magnetic fields could create QED pairs. But the required magnitudes are so high as to be beyond current laboratory capabilities.

However, “It turns out that current technology in lasers and relativistic beams [that travel near the speed of light], if co-located, is sufficient to access and observe this regime,” said physicist Nat Fisch, professor of astrophysical sciences and associate director for academic affairs at PPPL, and a co-author of the PRL paper and principal investigator of the project. “A key point is to use the laser to slow down the pairs so that their mass decreases, thereby boosting their contribution to the plasma frequency and making the collective plasma effects greater,” Fisch said. “Co-locating current technologies is vastly cheaper than building super-intense lasers,” he said.

This work was funded by grants from the National Nuclear Security Administration and the Air Force Office of Scientific Research. Researchers now are gearing up to test the theoretical findings at SLAC at Stanford University, where a moderately strong laser is being developed and the source of electrons beams is already there. Physicist Sebastian Meuren, a co-author of the paper and a former post-doctoral visitor at PPPL who now is at SLAC, is centrally involved in this effort.

“Like most fundamental physics this research is to satisfy our curiosity about the universe,” Qu said. “For the general community, one big impact is that we can save billions of dollars of tax revenue if the theory can be validated.”