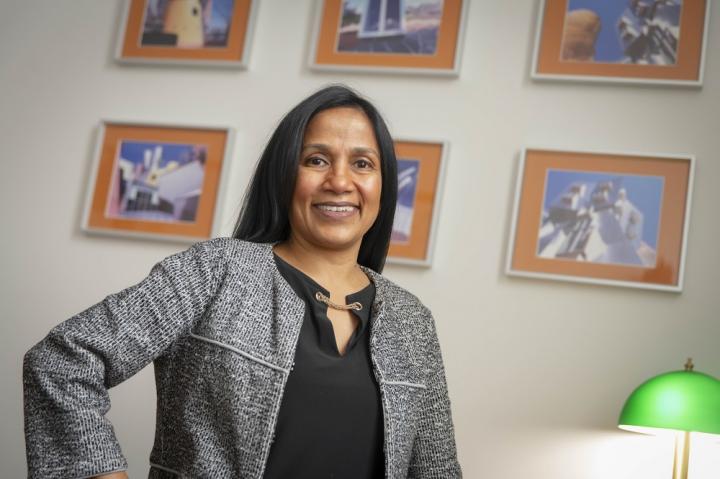 Worcester, Mass. – Dec. 10, 2019 – A study by researchers in the United States and India has shown that probiotic yeasts derived from food are able to reduce the virulence of, and even prevent infections by, several types of fungi that are responsible for life-threatening infections in hospitalized and immune-compromised individuals, including the multi-drug resistant Candida auris, which was recently listed as an urgent threat by the U.S. Centers for Disease Control in its 2019 Antibiotic Resistance Threats report.

While Candida albicans is the leading cause of hospital-acquired fungal infections, the study focuses on a number of non-albicans species that are of increasing concern to public health officials as they can cause similar infections and as many of these strains are developing resistance to available antifungal medications.

Reeta Rao, professor of biology and biotechnology and associate dean of graduate studies at Worcester Polytechnic Institute (WPI) and one of the lead authors of the study, explained, “Candida auris, for example, which can cause severe, often fatal infections in hospitalized patients, frequently does not respond at all to commonly used antifungal drugs, making infections almost impossible to treat.”

In immune-compromised patients or even healthy individuals with implanted medical devices, Candida can penetrate the submucosal tissue of the gastrointestinal tract and reach the internal organs, where it can cause life-threatening systemic infections. The microbes’ drug resistance stems, in part, from their ability to adhere to surfaces and form biofilms. “A biofilm is a complex ecosystem that can become a physical barrier against drugs,” Rao said. “Biofilms can form on medical devices, catheters and IV lines, and even contact lenses. They can also penetrate epithelial tissue in the body, leading to a variety of infections, including the deadly bloodstream infections we can see with Candida auris.”

Even when they do work, antifungal drugs often have serious side effects. Fungal cells are similar to the eukaryotic cells that make up human bodies, so the drugs can attack and damage the very tissues they are designed to protect. “This has led to a growing recognition of the need for alternative therapies,” Rao said. “We chose to look at food-derived probiotic yeast, which could present a safe and cost-effective method to keep Candida in check.”

In the study, published in the journal mBio (“Probiotic Yeasts Inhibit Virulence of Non-albicans Candida Species”) and recommended by F1000Prime, an online service that highlights scientific articles of critical interest to the research community, the researchers examined the ability of two food-derived yeasts, Saccharomyces cerevisiae and Issatchenkia occidentalis, which grow naturally on fruits and other foods, to combat adhesion and biofilm formation in non-albicans species of Candida.

They found that applying these yeasts to non-biological surfaces reduced the ability of non-albicans fungi, including Candida auris, to adhere to these surfaces by as much as 53 percent. The yeasts also reduced the formation of biofilms by as much as 70 percent. Similar results were obtained with mixed cultures containing non-albicans and albicans fungal species. Applying the food-derived yeasts to surfaces also inhibited a process known as filamentation in a number of non-albicans fungi. Filamentation is a mechanism used by virulent fungi to evade the body’s immune response and is believed to be important to adhesion and biofilm formation.

In another set of experiments, the researchers examined the effect of the presence of the food-derived yeasts on the ability of non-albicans fungi to adhere to human epithelial cells. They found that the yeasts were highly effective in reducing adhesion, particularly when they were present before the fungal microbes were introduced. To test whether the yeasts would have a similar effect in a living organism, the researchers infected Caenorhabditis elegans, a nematode that mimics key aspects of human intestinal physiology, with non-albicans fungi. They found that the nematodes lived longer and the fungi recovered from infected nematodes were less active when they were treated with the food-derived yeasts.

The researchers also showed that extracts from the yeast cells were able inhibit adhesion by non-albicans fungi, suggesting that the effect might be due by secondary metabolites produced by the yeasts. “As the rate of deadly infections by Candida auris and other non-albican fungi species increases, there is a pressing need for more effective and safer medications to both prevent and treat these intractable illnesses,” Rao said. “This study has shown that probiotic yeast may be the alternative we have been looking for, and certainly warrants further investigation.”

Rao, a fellow of the American Academy of Microbiology, is currently focused on understanding the molecular mechanism of action, as well as computational modeling of the microbial interactions in silicon.

WPI, the global leader in project-based learning, is a distinctive, top-tier technological university founded in 1865 on the principle that students learn most effectively by applying the theory learned in the classroom to the practice of solving real-world problems. Recognized by the National Academy of Engineering with the 2016 Bernard M. Gordon Prize for Innovation in Engineering and Technology Education, WPI’s pioneering project-based curriculum engages undergraduates in solving important scientific, technological, and societal problems throughout their education and at more than 50 project centers around the world. WPI offers more than 50 bachelor’s, master’s, and doctoral degree programs across 14 academic departments in science, engineering, technology, business, the social sciences, and the humanities and arts. Its faculty and students pursue groundbreaking research to meet ongoing challenges in health and biotechnology; robotics and the internet of things; advanced materials and manufacturing; cyber, data, and security systems; learning science; and more. http://www.wpi.edu