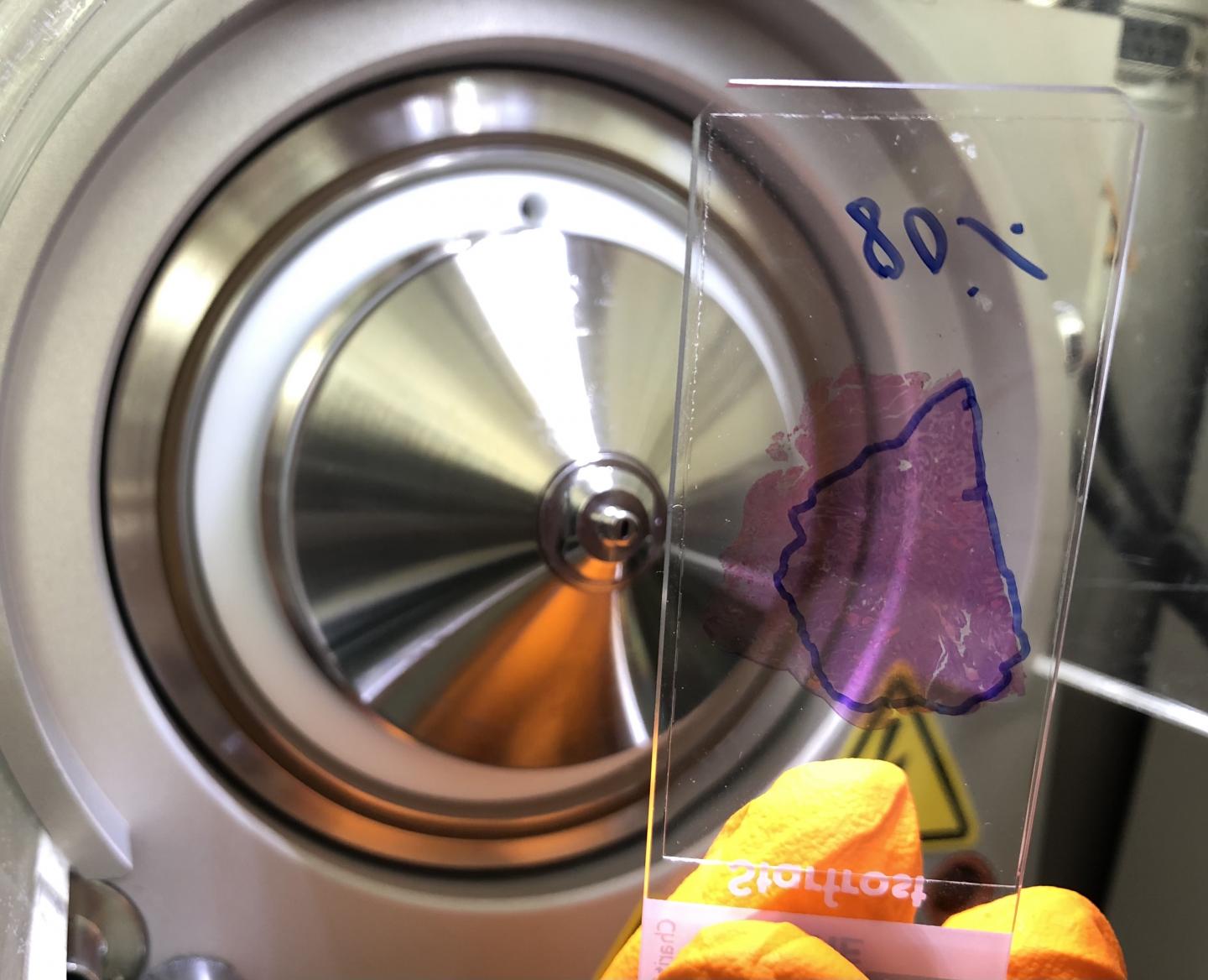 Today as they did 100 years ago, doctors diagnose cancer by taking tissue samples from patients, which they usually fix in formalin for microscopic examination. In the past 20 years, genetic methods have also been established that make it possible to characterize mutations in tumors in greater detail, thus helping clinicians select the best treatment strategy.

Even tiny tissue samples can be used to detect proteins

Now, a group of researchers from the Berlin-based Max Delbrück Center for Molecular Medicine in the Helmholtz Association (MDC), the Berlin Institute of Health (BIH), Charité – Universitätsmedizin Berlin and the German Cancer Consortium (DKTK) have succeeded in analyzing in detail more than 8,000 proteins in fixed samples of lung cancer tissue using mass spectrometers.

“Using the methods we have developed, it has become possible to conduct an in-depth analysis of molecular processes in cancer cells at the protein level – and to do so in archived patient samples that are collected and stored in large numbers in everyday clinical practice,” says Dr. Philipp Mertins, head of the Proteomics Platform at the MDC and the BIH. “Even very small tissue samples, such as those obtained in needle biopsies, are sufficient for our experiments.”

The study, published in the journal “Nature Communications“, is considered a major success for the Multimodal Clinical Mass Spectrometry to Target Treatment Resistance (MSTARS) research project, which has been funded by the German Federal Ministry of Education and Research (BMBF) to the tune of around €5.7 million since 2020.

The team of researchers, led by Mertins and Professor Frederick Klauschen from the Institute of Pathology at Charité, has been able to show that proteins – unlike the frequently studied yet quite sensitive RNA molecules – remain stable in the samples for many years and can be precisely quantified. “In addition, the proteins that are present in the tumor tissue map disease progression especially well,” says lead author Corinna Friedrich, a PhD student in the labs of Mertins and Klauschen. “This is because they provide information about such things as which of the genes that promote or inhibit tumor growth are particularly active in the cells.”

The picture gained from the team’s analysis of two forms of lung cancer – adenocarcinomas and squamous cell carcinomas – has also become so detailed because the researchers have not only uncovered a great many of the proteins present in the cell, but have also quantified more than 14,000 phosphosites. With the help of phosphorylation, a mechanism that regulates the reversible attachment of phosphate groups to proteins, the cell controls almost all biological processes by switching certain signaling pathways on or off.

“Our paper thus provides a good basis for gaining a better understanding of disease progression in lung cancer and also in other types of cancer,” says Klauschen, who, along with Mertins, is co-corresponding author of the study. Klauschen has since become director of the Institute of Pathology at Ludwig-Maximilians-Universität München, but continues to conduct research at Charité. “The methods we have developed will also enable us to better explain in the future why a very specific therapy works for some patients but not for others,” adds the pathologist. This will, he says, make it easier, to find the best treatment option for each patient.

Mertins also hopes that the mass spectrometric analysis of the proteome in tissue samples will pave the way for the discovery of not only new biomarkers for therapeutic decisions and patient survival predictions, but also other molecular structures that could serve as targets for future drugs.

And, according to the researcher, there is yet another plus to the new approach: “Our methods are not only suitable for researching cancer, but can also be applied very broadly.” For example, the Proteomics Platform has already successfully analyzed the proteome of fixed immune cells from COVID-19 patients. The authors have also provided guidelines on which mass spectrometric methods are best suited for different types of clinical studies.

Next on the agenda for the MDC platform is the mass spectrometric analysis of additional fixed immune cells as well as fixed cardiovascular tissue for the presence of proteins and phosphosites. “The aim here is to get a better understanding of infectious and cardiovascular diseases,” explains Mertins, “so that one day it might be possible to treat these diseases in a much better way than has so far been the case.”

The Max Delbrück Center for Molecular Medicine in the Helmholtz Association (MDC) is one of the world’s leading biomedical research institutions. Max Delbrück, a Berlin native, was a Nobel laureate and one of the founders of molecular biology. At the MDC’s locations in Berlin-Buch and Mitte, researchers from some 60 countries analyze the human system – investigating the biological foundations of life from its most elementary building blocks to systems-wide mechanisms. By understanding what regulates or disrupts the dynamic equilibrium in a cell, an organ, or the entire body, we can prevent diseases, diagnose them earlier, and stop their progression with tailored therapies. Patients should benefit as soon as possible from basic research discoveries. The MDC therefore supports spin-off creation and participates in collaborative networks. It works in close partnership with Charité – Universitätsmedizin Berlin in the jointly run Experimental and Clinical Research Center (ECRC), the Berlin Institute of Health (BIH) at Charité, and the German Center for Cardiovascular Research (DZHK). Founded in 1992, the MDC today employs 1,600 people and is funded 90 percent by the German federal government and 10 percent by the State of Berlin. http://www.mdc-berlin.de