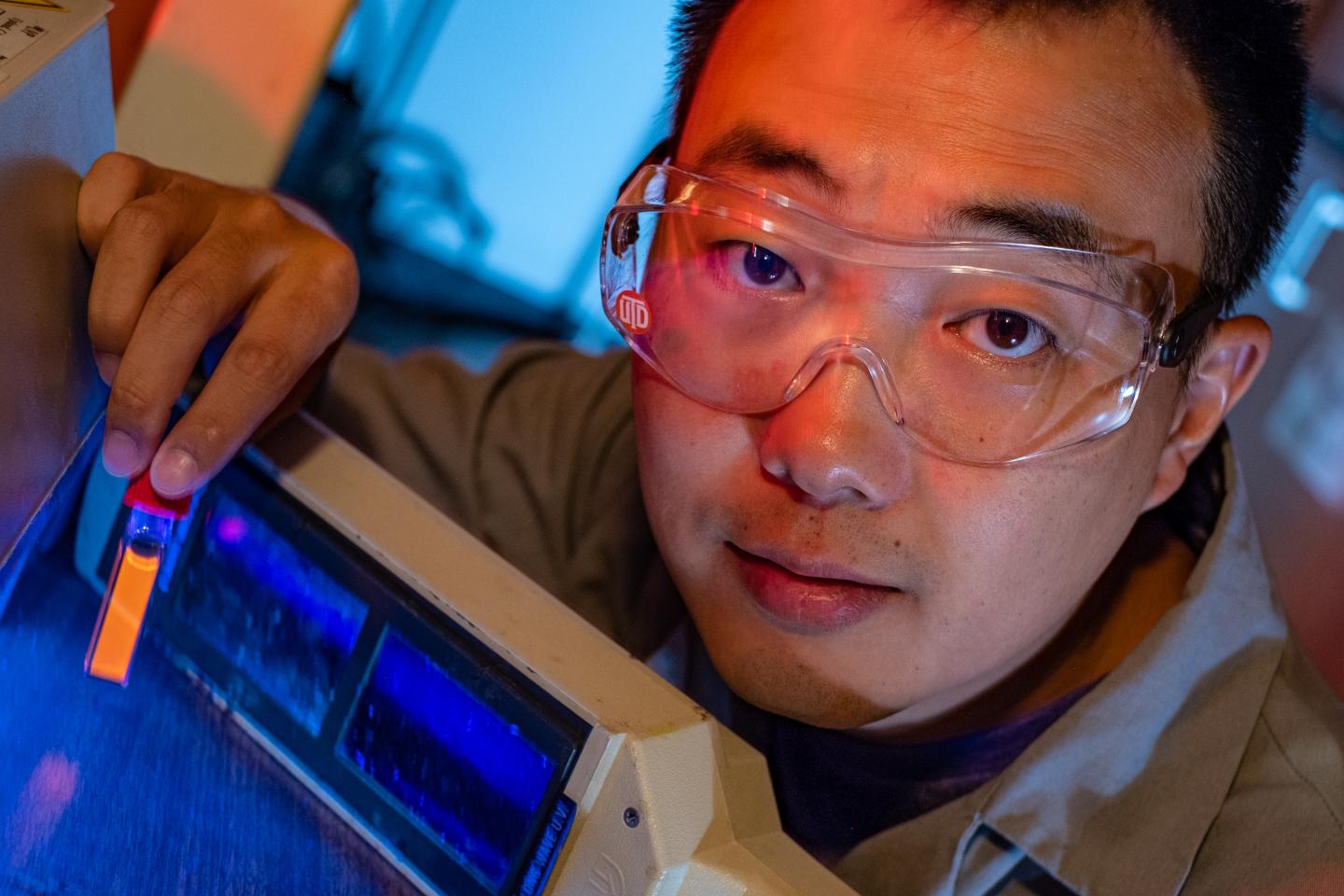 HOUSTON – (Sept. 23, 2019) – Rice University researchers have found a way to track the formation of soluble amyloid beta peptide aggregates implicated in the onset of Alzheimer’s disease.

The Rice lab of Angel Martí reported its development of a ruthenium-based fluorescent complex that binds to soluble, oligomeric amyloid beta peptides. As the peptides come together to form the large biomolecules called oligomers, the fluorescent additive binds and labels them.

That will allow researchers to easily track the progress and movements of aggregates as they grow over time. Details of the work appear in the Journal of the American Chemical Society.

Amyloid plaques have long been suspected as the root cause of Alzheimer’s, but recent studies suggest that oligomers — floating molecules with repeating peptide units — do far more damage.

“There’s a view in the field that soluble oligomers are the main cause of neuronal degeneration, because these oligomers are toxic to neurons,” said Martí, an associate professor of chemistry, of bioengineering and of materials science and nanoengineering.

“These oligomers are definitely associated with Alzheimer’s pathology, so there’s been a need for tools to help us study them.”

The complexes take advantage of fluorescence anisotropy, in which the fluorescent response is polarized, glowing brighter in some directions than others. “It’s a very old technique related to the rotation of molecules,” Martí said. “When the molecule is in solution, it moves and is constantly rotating. When it’s very small, it rotates very fast and the anisotropy is nearly zero.

“But when the same probe binds to a big macromolecule, it rotates more slowly,” he said. “That’s how we know we have oligomers, and then we can track their growth and propagation.”

Lab tests showed oligomers forming in solution at different temperatures over hours. Martí noted cold solutions slow the process, but at body temperatures, oligomers form “very fast and in large amounts. The speed at which they form at physiological temperatures is remarkable.”

The Rice lab also used its probes to see how neuroblastoma cells were affected in real time when injected with amyloid beta peptides. They revealed only 60% of cells injected with oligomers remained viable, while those treated with amyloid fibrils and monomers had higher viability, about 80%, suggesting the oligomers are indeed toxic, Martí said.

For now, he said, the ruthenium probes are meant for use only in the laboratory. “It will be difficult to use these in the brain because there’s too much scattering of light,” Martí said. “They are made to take advantage of polarized light, and scattering would dampen that.”

“But as a lab tool, they will allow researchers around the world to test the effects of other molecules on the rate of oligomer formation, and that’s a big deal,” he said. “They can quickly see if a drug delays or halts the formation of oligomers.”

The Welch Foundation supported the research.

This news release can be found online at https://news.rice.edu/2019/09/23/probes-shed-new-light-on-alzheimers-cause/

Rice University graduate student Bo Jiang shows a fluorescing vial of soluble amyloid beta peptide aggregates implicated in the onset of Alzheimer’s disease. The peptides are tagged and tracked with a ruthenium complex developed at Rice that can monitor them in lab experiments as they grow over time. (Credit: Jeff Fitlow/Rice University)

A ruthenium-based tag developed at Rice University takes advantage of fluorescent anisotropy to measure the rotation of amyloid beta oligomers as they grow in solution. Small aggregates rotate fast, while large oligomers rotate slowly, a characteristic that lets researchers watch as they grow. Amyloid beta oligomers are toxic to neurons and implicated as a possible cause of Alzheimer’s disease. (Credit: Angel Martí Group/Rice University)