HOUSTON – (Nov. 15, 2021) – Prions get mostly bad press, but they may be the keys to controlling protein synthesis in cells. 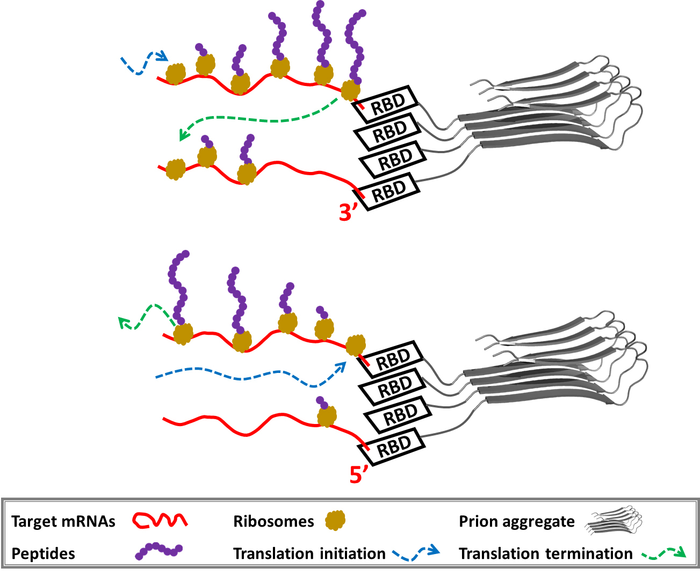 HOUSTON – (Nov. 15, 2021) – Prions get mostly bad press, but they may be the keys to controlling protein synthesis in cells.

Prions, proteins that can misfold and aggregate, have been implicated in many neurodegenerative diseases. Yet some prions are involved in storing long-term memories. New models by Rice University scientists describe how they can regulate the translation of RNA messages into new proteins by forming organized protein synthesis factories.

A study led by theoretical physicist Peter Wolynes and graduate student Xinyu Gu, with aid from Rice alumnus Nicholas Schafer, suggests that two prions in either aggregate or condensate form can activate or repress the translation of actin proteins, depending on the orientation in which they bind mRNA.

The study appears in the Proceedings of the National Academy of Sciences.

The lab modeled “protein assembly lines” centered on CPEB and Rim4, two examples of the 240 known prion-coding genes that are also known to bind RNA in eukaryotic cells.

CPEB and Rim4 represent a kind of yin and yang when it comes to translation because they are direct opposites in how they bind to mRNA. Their orientation affects how — and whether — ribosomes are able to be recycled during protein synthesis when the RNA is assembled on the prion.

How CPEB controls the translation of RNA messages was a mystery. It was known to repress translation when it was a monomer, but once it aggregated, it activated translation. Gu set out to explain how this could happen, which was more complicated than she anticipated.

“CPEB itself controls translation in a bidirectional way,” Gu said. “If it’s a prion, it will enhance translation, and if it is in a less orderly condensate, it will repress translation. Our model proposes a physical hypothesis about how this happens.”

Briefly, CPEB proteins aggregate into prions that bind the 3’ (aka 3 prime) terminal of mRNA. Ribosomes, the molecular machines that decode RNA to assemble proteins, easily find the other end (the “start codon”) and then work their way in toward the “stop codon,” which is bound to the prion. Once the ribosomes reach this 3’ terminal, they are released and begin the cycle again at the outer 5’ end.

Rim4, on the other hand, takes the opposite tack, as it binds to — and thus conceals — the 5’ terminal of mRNA. Now it’s more challenging for the floating ribosomes to find the start codon, effectively repressing translation and making the prion of Rim4 less efficient.

Interestingly, CPEB in its monomer form before aggregating or when it is part of a condensate (aka a “membraneless organelle”) may channel mRNA translation in precisely the opposite way.

“Most people visualize protein RNA condensates as being not polarized; they think they are a sort of random assembly of things just stuck together,” Wolynes said. “But our model suggests there may still be some kind of vectoral effect in condensate, if they have a locally polarized structure. Understanding the internal structure of membraneless organelles thus becomes a critical question.”

Wolynes and his group at Rice’s Center for Theoretical Biological Physics (CTBP) have previously shown there is a symbiotic relationship between CPEB prions and actin, the structural building block of the cytoskeleton that gives cells their overall shape and provides the backbone in neurons’ spiky dendrites. They theorized that actin filaments pull on CPEB fibers and in the process “lock in” memories by tagging specific dendrites.

The new work suggests that the “vectorial” nature of mRNA translation and the specific polarity of CPEB assemblies can explain how these assemblies exert an essential regulatory function on the synthesis of actin and other synaptic proteins. The mechanism may be employed by other biological systems as well.

Wolynes said the details revealed in the study are only a very small part of the mechanism of memory formation, with the understanding there’s much more to learn.

“Memory formation is a very broad problem, whose final solution will fill many blackboards,” he said. “So far we’ve only filled one little corner of a single blackboard and another little corner over there. Unravelling these complicated processes is inspiring our work in many areas of theoretical biological physics.”

Wolynes is the D.R. Bullard-Welch Foundation Professor of Science and a professor of chemistry, biosciences and physics and astronomy at Rice and co-director of the CTBP. The CTBP is supported by the National Science Foundation (1743392 and 2019745).

This news release can be found online at news.rice.edu/news/2021/prions-may-channel-rnas-messages.

Rice University scientists found the organized structure of mRNA/prion aggregates provides a new route to regulation of translation activity. At top, a CPEB protein binds to the 3’ (aka 3 prime) terminal of a target mRNA using an RNA-binding domain (RBD). The prion aggregate forms a translation assembly line in which ribosomes are efficiently recycled. After translation is complete, the ribosomes are released from the mRNA 3’ end and diffuse outwards to be recruited again by the 5’ ends at the outer layer of the assembly. At bottom, the structure of the mRNA and Rim4 aggregates displays the opposite polarity and represses translation. Rim4 RBD binds with the 5’ terminal of target mRNAs. (Credit: Illustration by Xinyu Gu/Rice University)