Pasadena, CA— The ancestors of some of the largest galaxy clusters have been hiding in plain sight. New work led by Carnegie’s Andrew Newman demonstrates a new technique for identifying the precursors of the most extreme galactic environments. The team’s findings are published in Nature. 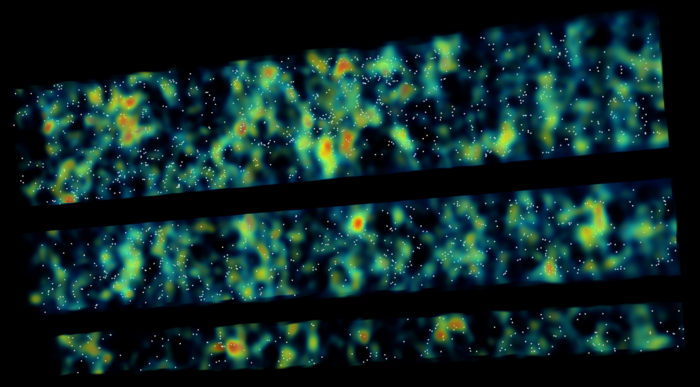 Pasadena, CA— The ancestors of some of the largest galaxy clusters have been hiding in plain sight. New work led by Carnegie’s Andrew Newman demonstrates a new technique for identifying the precursors of the most extreme galactic environments. The team’s findings are published in Nature.

Like all of us, galaxies are shaped and molded by their surroundings. To obtain a complete picture of the various physical influences on a galaxy’s lifecycle, it’s crucial to trace the emergence of properties caused by environmental factors as they arise.

“We’ve known for a long time that the colors, masses, and shapes of galaxies depend on their cosmic environment, but there’s a lot we don’t know about when and how those differences appeared,” Newman said.

The Big Bang started the universe as a hot, murky soup of particles that was rapidly expanding. Some regions of the universe were denser than others and, over time, their gravity overcame the universe’s expansion, causing the material to collapse inward, forming clumps of structure that would eventually give birth to groups or clusters of galaxies.

But the team found that these protoclusters can be surprisingly hard to spot.

The key to their method is the fact that the intergalactic hydrogen gas that’s part of the protocluster will absorb light passing through it, casting a kind of a shadow on the galaxies behind them, beyond the boundaries of the protocluster. By using the Magellan telescopes at Carnegie’s Las Campanas Observatory in Chile to observe such shadows, the team was able to identify the likely locations of protoclusters.

“We were very surprised to find so few galaxies inside the protoclusters that cast the strongest shadows, which is why these protoclusters were missed by earlier searches,” Newman said.

Their findings suggest that the overlooked protoclusters harbor unseen galaxies that must have evolved differently, making them dimmer and therefore harder to detect. The team plans to conduct further searches to locate these missing galaxies and determine their unusual properties.

“It’s interesting that the evolutionary paths of these galaxies diverged so early in the history of the universe, long before the clusters they now live in were assembled,” said Blanc.

Added Rudie: “One of the key lessons from this work is that as we map the distant universe, it’s important to bring together multiple perspectives; using just one technique can give a misleading picture.”

The researchers indicated that future protocluster searches will be able to test their findings against a larger population.

This work was supported in part by the U.S. National Science Foundation and the Chilean National Research and Development Agency.

This paper includes data gathered with the 6.5-meter Magellan Telescopes located at Carnegie’s Las Campanas Observatory, Chile. This work is based in part on observations obtained with MegaPrime / MegaCam, a joint project of CFHT and CEA/IRFU, at the Canada–France–Hawaii Telescope (CFHT) which is operated by the National Research Council (NRC) of Canada, the Institut National des Science de l’Univers of the Centre National de la Recherche Scientifique (CNRS) of France, and the University of Hawaii. It is also based, in part, on data products produced at Terapix available at the Canadian Astronomy Data Centre as part of the Canada–Frace–Hawaii Telescope Legacy Survey, a collaborative project of NRC and CNRS.

A population of ultraviolet-dim protoclusters detected in absorption