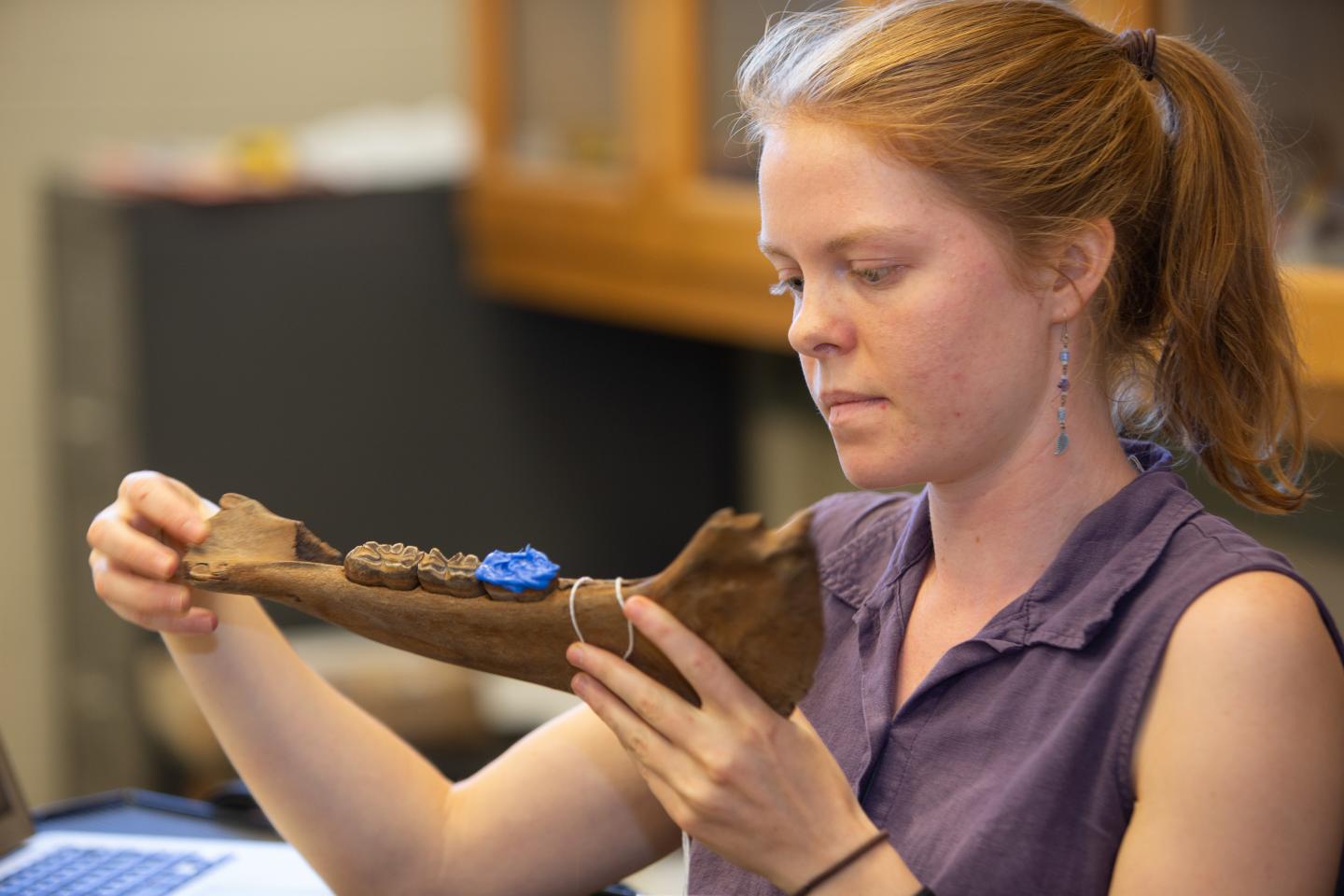 University of Cincinnati researchers studied the teeth of prehistoric horses and bison in the Arctic to learn more about their diets compared to modern species.

What they found suggests the Arctic 40,000 years ago maintained a broader diversity of plants that, in turn, supported both more — and more diverse — big animals.

The Arctic today is spartan compared to the wildlife-rich landscape during the ice ages of the Pleistocene epoch between 12,000 and 2.6 million years ago when wild horses, mammoths, bison and other big animals roamed the steppes and grasslands of what is now northern Canada, northern Europe, Alaska and Siberia. Short-faced bears, ground sloths and even cave lions called the 49th State home.

The Arctic supported greater populations as well, even compared to today’s spectacular herds of caribou that can number more than 750,000 animals. The area supported between six and 10 times as many large animals as today’s Arctic.

“In the Pleistocene, the diversity of wildlife was so much greater than we see today,” UC assistant professor Joshua Miller said. “It looked completely different. A key question is why the the Arctic so depauperate by comparison today?”

The study was published in the journal Palaeogeography, Palaeoclimatology, Palaeoecology.

Researchers studied two of the most common big animals living between 12,000 and 40,000 years ago in what is now Alaska: horses and steppe bison, both of which went extinct due to climate change, human hunting or a combination of both.

UC doctoral student and lead author Abigail Kelly made dental casts of fossil specimens obtained from the University of Alaska Museum and subjected the fossil teeth to dental-wear analysis to evaluate the diet of these extinct animals.

“Because foods have different textures and interact with the enamel surface in different ways, we can look at different diets,” Kelly said.

Teeth of plant-eating animals show different signs of wear depending on the type of food they chew. Grass is particularly abrasive because it contains silica that can wear down teeth over time. To the naked eye, grass-eating animals have teeth with blunter wear profiles (called mesowear). When viewed with a microscope, the teeth show parallel scratches. Animals that eat less grass and more leaves from trees, herbs and shrubs have relatively sharper teeth with fewer microscopic scratches.

UC researchers found the wear patterns on the teeth of steppe bison had fewer scratches than modern plains bison that eat mostly grass but more scratches than European bison, which likely feed on more woody plants. Similarly, prehistoric horses had teeth that bore different wear patterns compared to modern horses, suggesting their diet contained fewer abrasive grasses. Prehistoric bison and horses probably ate a more varied diet rich in broadleaf herbaceous plants than today’s bison and horses.But the researchers said the microwear patterns could be a reflection of the seasonal foods the animal ate in the months before it died.?

The study suggested the Arctic had a broader mix of vegetation than exists today.

“It seems like the diets of bison and horses were not that different. They were eating similarly textured foods,” Miller said. “But their physiology is quite different. Bison are foregut fermenters that digest food differently compared to hindgut fermenters such as horses. So there is potential for species to get different levels of nutrition from the same food.”

The study has pressing relevance for conservation of wood bison, which were hunted to extinction in the United States in the 1900s. Populations from Canada were reintroduced to Alaska in 2015. North America’s largest land animal, the wood bison, is a descendant of plains bison that migrated northward about 10,000 years ago and briefly coexisted with the steppe bison before replacing them.

Biologist and study co-author Tom Seaton is overseeing the reintroduction of wood bison for the Alaska Department of Fish and Game. He said their analysis offers important perspectives on how diverse populations of herbivores coexisted on the Alaska landscape thousands of years ago that could help biologists understand the needs of wood bison today.

Steppe bison survived thousands of years longer than horses, even though both relied on similar foods, according to UC’s tooth analysis.

But it’s likely the bison and horses evolved to use the landscape’s resources in different ways — a phenomenon called “niche partitioning.” Horses and bison also have important differences in the way they digest food.

“This study provides insights for Alaska’s wood bison restoration project through perspectives of niche partitioning between large herbivores on Alaska’s modern landscape,” Seaton said. “My hope is that this study will provide one more piece in the puzzle of bison restoration in the north.”

While grazers like horses and bison went extinct in the Arctic, browsers such as moose and caribou that subsist mostly on leaves and woody plants still persist.

“What’s interesting is why it’s the grazers that go extinct while the browsers make it through,” Miller said.

“The impacts of climate on vegetation can create a sudden shift,” he said. “The cooler, drier environments of the late Pleistocene allowed megafauna to thrive. But the warm and wet climates of the Holocene led to today’s wet tundra vegetation.”

For her next project, doctoral student Kelly will take a closer look at bison and horses in the Yukon that lived around the same time.

“We’ll be focusing on the story of how bison responded to the environmental changes of the last 50,000 years, as northern climates swung from relatively mild conditions, to extremely cold and dry during the last Glacial period, and finally rapid warming to the boreal forest climate we see today,” she said. “Are bison able to change their diets in response to changing vegetation, or are they fixed within one niche?”