Predicting the optical read-out of a qubit from first principles

Quantum computers process and store information digitally, just like conventional computers. They do not, however, use switchable circuits that are either on or off—they rather use quantum physical systems that can adopt the two states simultaneously. The sort of system featuring this superposition of two states is known as a quantum bit, or qubit. 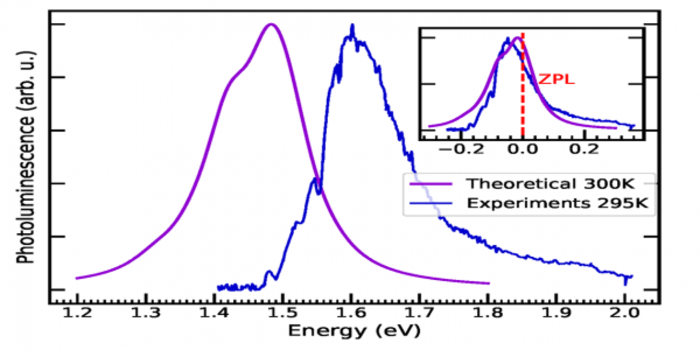 Quantum computers process and store information digitally, just like conventional computers. They do not, however, use switchable circuits that are either on or off—they rather use quantum physical systems that can adopt the two states simultaneously. The sort of system featuring this superposition of two states is known as a quantum bit, or qubit.

Though many systems have two precisely defined states that are subject to the rules of quantum physics, those intended for use as qubits must feature additional special properties. They must, for example, remain coherent for long enough to perform the quantum operations, be easy to control and efficiently readable. It must also be possible to switch qubits from on to off and back at extremely high speed. One approach that has gained a lot of attention is the idea of using electron spin as a qubit. It can only point “up” or “down” and so has exactly two states but can exist in a combination of the two.

Manipulating the spin of individual electrons through microwaves and magnetic fields allows researchers to create superposition, the fundamental element of the qubit, as well as entanglement, a linking of the qubits that keeps them from acting independently. Creating qubits then means finding a spot in a material where the quantum properties of the electrons can be accessed and controlled.

This is what has led, over the last decade, to a closer examination of defects. These spaces, where atoms are missing or misplaced in a material’s structure, can change how electrons move and, in some quantum materials, can trap electrons, allowing researchers to access and control spin. Such defects may therefore be an attractive option for making qubits for use in quantum computing, communication and sensing.

In developing these possibilities however, it is critical to figure out how to determine the spin state of the defect center at a given moment. In this, the optical properties can play a major role:  spin-dependent luminescence can be used in the so-called readout, or deterministic measurement, of the quantum state of defect centers that respond to a technique called optically-detected magnetic resonance (ODMR).

Defect centers in 2D hexagonal boron nitride (hBN) have recently gained attention due to features such as wide band gaps and low spin-orbit couplings that suggest advantages over existing 3D centers. Researchers have predicted that a negatively charged boron vacancy in the material is responsive to ODMR and emits in the infrared when stimulated with continuous green laser light, making it potentially useful in quantum computing. The peaks of the photoluminescence (PL) spectrum are also highly temperature dependent, meaning that they can be used to design sensitive thermometers.

The photoluminescence of defect centers in semiconductors is often phonon-assisted because of the coupling of excitons with vibronic modes of the atoms around the defect. For this reason, this photoluminescence is usually studied using the Huang-Rhys model, which indicates the average phonons emitted during an electronic transition. This model is, however, based on certain restrictive hypotheses that limit its predictive power and it doesn’t support the interpretation of phonon-assisted luminescence in terms of coupling between excitons and phonons, an element that’s essential to understanding the phenomenon.

In the paper “Phonon-assisted luminescence in defect centers from many-body perturbation theory,” recently published in Physical Review Letters (PRL), researchers led by Professor Nicola Marzari and PhD student Francesco Libbi in the Laboratory of theory and simulation of materials at EPFL, took another approach.

Many-body perturbation theory (MBPT), a means of accounting for electron correlation in calculating the probability of a transition between states of a continuous spectrum under the action of a constant perturbation has been used to study the optical properties of pristine hBN, allowing for the calculation of its phonon-assisted emission spectrum for both the bulk and the monolayer. The approach had never been used to study the luminescence of defect centers, however, because of the complexity and computational cost of the analyses. Now, in the PRL paper, it has been applied to predicting luminescence and studying exciton-phonon couplings of the negatively charged boron vacancy in 2D hBN.

Their simulations showed that the phonons are indeed largely responsible for the observed luminescence and that at low temperatures, the luminescence is determined by high frequency modes that are strongly coupled with excitons. Simulations also indicate that PL behavior that is very sensitive to temperature, suggesting that this defect can be used as a nanoscale thermometer, at least in a range of temperatures between 0 and 200 K.

The agreement between theory and experiments is very good, the authors said, adding that they hope that their explanation of the photoluminescence mechanisms will further the technological integration of defect centers for quantum information and sensing.