The quantum realm of atomic particles is embedded with randomness. Still, precise control of quantum systems, such as quantum computers, is of great importance for modern quantum science and prospective quantum technology. 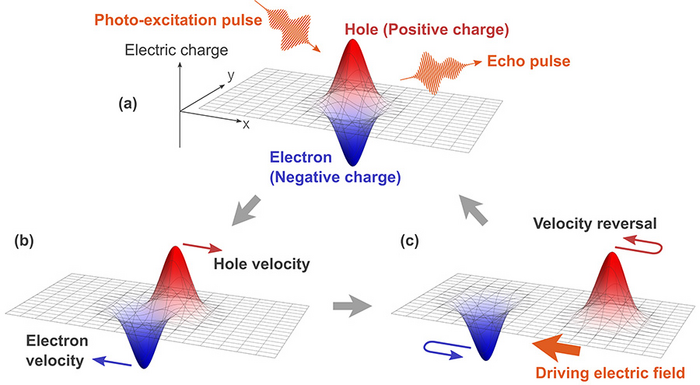 The quantum realm of atomic particles is embedded with randomness. Still, precise control of quantum systems, such as quantum computers, is of great importance for modern quantum science and prospective quantum technology.

In the classical world, time is constantly moving forward. But in the quantum world, time is theoretically malleable and reversible. And it is through these time-reversal dynamics that scientists have attempted to control quantum systems. For example, spin echoes – proposed by Erwin Hahn in 1950 – are widely observed in quantum spin-systems and are fundamental for nuclear magnetic resonance and magnetic resonance systems.

However, the application of such time-reversal phenomenon becomes difficult in more sophisticated, quantum condensed-matter systems – i.e., quantum systems with infinite degrees of freedom. This is because quantum coherence gets lost quickly when interacting with the environment.

Now, a research group led by Atsushi Ono, assistant professor in the Department of Physics at Tohoku University, has unearthed a new type of echo phenomenon associated with the energy-band structure in crystalline solids. So-called “energy-band echoes” were discovered after the group began theoretically investigating the ultrafast dynamics of optically driven quasiparticles in crystalline solids.

Details of their findings were published in the Journal Physical Review Research on November 30, 2022.

The group’s numerical simulation and analytical expressions revealed that quasiparticles are driven coherently by an electric field pulse, and the photoexcitation process generates echoes when the quasiparticles recombine. These echo pulses carry information about the dispersion relations of quasiparticles.

Additionally, Ono and his team observed energy-band echoes even in strongly correlated systems, where free electrons are not well-defined quasiparticles on account of many-body interactions.

“Our discovery provides a different perspective of ultrafast dynamics that are driven and controlled by a lightwave,” Ono said. “Energy-band echoes could be used for all-optical momentum-resolved spectroscopy of quasiparticles in both crystalline solids and cold atoms in optical lattices, even when strong many-body correlations are present.”