Prado elected to the National Academy of Medicine

Guillermo “Willy” Prado, professor of nursing and health studies, public health sciences, and psychology at the University of Miami, has been elected to the prestigious National Academy of Medicine (NAM) for his scholarship in prevention science, and for his effective youth- and family-focused HIV and substance-use prevention interventions, which have been scaled throughout school systems and clinical settings in the United States and Latin America. 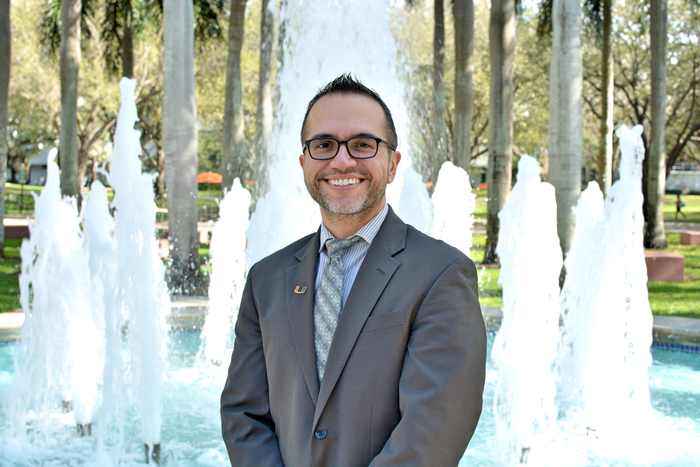 Guillermo “Willy” Prado, professor of nursing and health studies, public health sciences, and psychology at the University of Miami, has been elected to the prestigious National Academy of Medicine (NAM) for his scholarship in prevention science, and for his effective youth- and family-focused HIV and substance-use prevention interventions, which have been scaled throughout school systems and clinical settings in the United States and Latin America.

This extraordinary honor, announced Monday, is considered one of the highest recognitions in the fields of health and medicine and recognizes individuals who have demonstrated outstanding professional achievement and commitment to service. With their election, NAM members make a commitment to volunteer their service in National Academy activities.

“I was so shocked and humbled by [the recognition],” said Prado, who also serves as vice provost for faculty affairs and dean of the Graduate School. “It is wonderful to have been elected by the National Academy of Medicine and to be able to be among such a distinguished list of NAM members across the country and at our University.”

A proud double alumnus of the University of Miami, Prado earned his Ph.D. in epidemiology and public health in 2005 and his Master of Science in statistics in 2000. He began his tenure at the University as a faculty member in 2007 and has continued to make his mark in prevention science, particularly Latino youth health disparities.

“Dean Prado is an exemplary leader and researcher at this University. His election to the National Academy of Medicine is a culmination and reflection of his hard work and dedication to research in prevention science,” said Jeffrey Duerk, executive vice president for academic affairs and provost. “We and the many beneficiaries of his research are proud and fortunate to have him at the University of Miami.”

Prado’s research broadly focuses on the development, evaluation, and dissemination of parenting interventions for Hispanic youth and their families. His research has appeared in more than 160 peer-reviewed articles and chapters.

Cindy Munro, dean of the School of Nursing and Health Studies, said Prado is an “outstanding scientist whose work directly addresses health equity for Hispanic families. His recognition by the NAM is well deserved.”

Over the past 20 years, Prado has been the principal investigator, co-investigator, or mentor of more than $100 million in funding from the National Institutes of Health (NIH). He is currently the principal investigator of a study evaluating the effectiveness and implementation of an online adaption of Familias Unidas, an evidence-based family intervention for Hispanic youth in primary care, funded by the National Institute of Mental Health. He is also the director of the Investigator Development Core of the Center for Latino Health Research Opportunities.

New members are elected by current members through a process that recognizes individuals who have made major contributions to the advancement of the medical sciences, health care, and public health. A diversity of talent among NAM’s membership is assured by its articles of organization, which stipulate that at least one-quarter of the membership is selected from fields outside the health professions—for example, from such fields as law, engineering, social sciences, and the humanities.

“It is my privilege to welcome this extraordinary class of new members. Their contributions to health and medicine are unmatched—they’ve made groundbreaking discoveries, taken bold action against social inequities, and led the response to some of the greatest public health challenges of our time,” said Victor J. Dzau, NAM president. “This is also the NAM’s most diverse class of new members to date, composed of approximately 50 percent women and 50 percent racial and ethnic minorities. This class represents many identities and experiences—all of which are absolutely necessary to address the existential threats facing humanity. I look forward to working with all of our new members in the years ahead.”

Prado credits his success to his parents, spouse, family, research team, and a strong network of talented people in the University community and beyond that have supported and mentored him over the years.

“This award really belongs to a lot of people,” he said. “It belongs to all the many individuals who have helped to support my professional and career goals—including my administrative leadership at the University, and to all the families that my team and I have been able to serve over the years. Certainly, without them, this would not have been possible.”