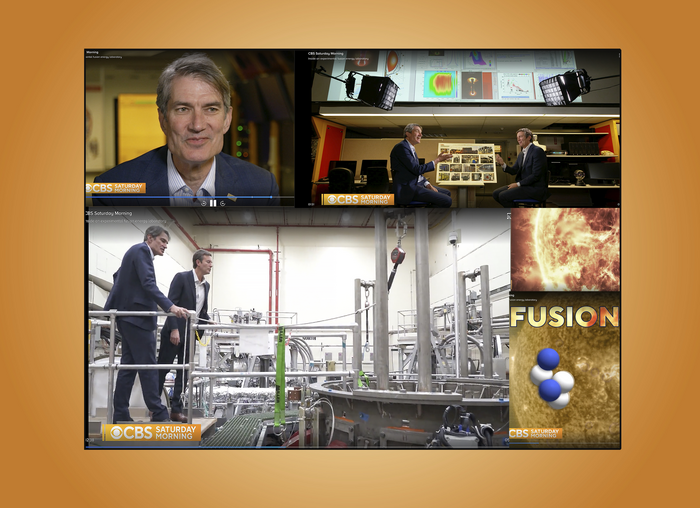 The U.S. Department of Energy’s Princeton Plasma Physics Laboratory (PPPL) and Steve Cowley, PPPL’s director, were featured on the July 23 “CBS Saturday Morning,” show in a segment entitled “Inside an Experimental Fusion Energy Laboratory.” You can view the segment on the CBS News site.

In the segment, CBS News correspondent Jeff Glor takes a tour of PPPL and visits the National Spherical Torus Experiment-Upgrade (NSTX-U) control room and test cell. “Progress is being made,” Glor says at the start of the program. “To get a closer look, we traveled to Princeton, New Jersey, to see what life is like at 200 million degrees.”

“I was delighted to see PPPL highlighted in the CBS program and even happier that the program focused on the great potential of fusion energy as a game-changing source of electricity that does not produce carbon and will be clean, green, and affordable,” Cowley said.

The segment features a 2009 news clip of Cowley as head of the Culham Centre for Fusion Energy in Britain explaining why fusion energy is “the perfect energy source.” The National Academies of Science has recently called for a move to fusion energy by 2035, Cowley tells Glor in the interview.

“Hope is closer to reality when you take a look at a tokamak,” Glor says. Cowley explains that temperatures inside a doughnut-shaped fusion device, a tokamak like NSTX-U, can reach up to 200 million degrees. Fusion energy is the process that powers the sun, which is made of the plasma that fuels fusion reactions in laboratory experiments, Cowley tells Glor.

Glor and Cowley view a video of an NSTX-U plasma. “And the goal is to have that sustained for hours?” Glor asks. “Hours, days, months, years,” Cowley replies. Fusion energy would make steam that generates electricity for the national power grid, Glor explains.

Cowley points out that fusion energy is very safe and there are no meltdowns or explosions if the process fails. “It’s a very safe energy source that you could put next to your town,” Cowley says.

Fusion energy could be used in combination with other renewable energy sources such as wind and solar, Cowley said. “The obvious advantage of fusion is that you don’t need sun or wind to get the job done,” Glor said. “A few gallons of seawater and the lithium in a couple of laptop batteries could provide enough energy for one person for their entire life.”

Cowley concludes in the interview, “What we really need to do is drive the innovation – it’s ideas. Bright scientists coming into the field and solving the remaining problems. I think we can do fusion. Our big challenge at the moment is to do it at a cost that the consumer wants to pay for their electricity.”