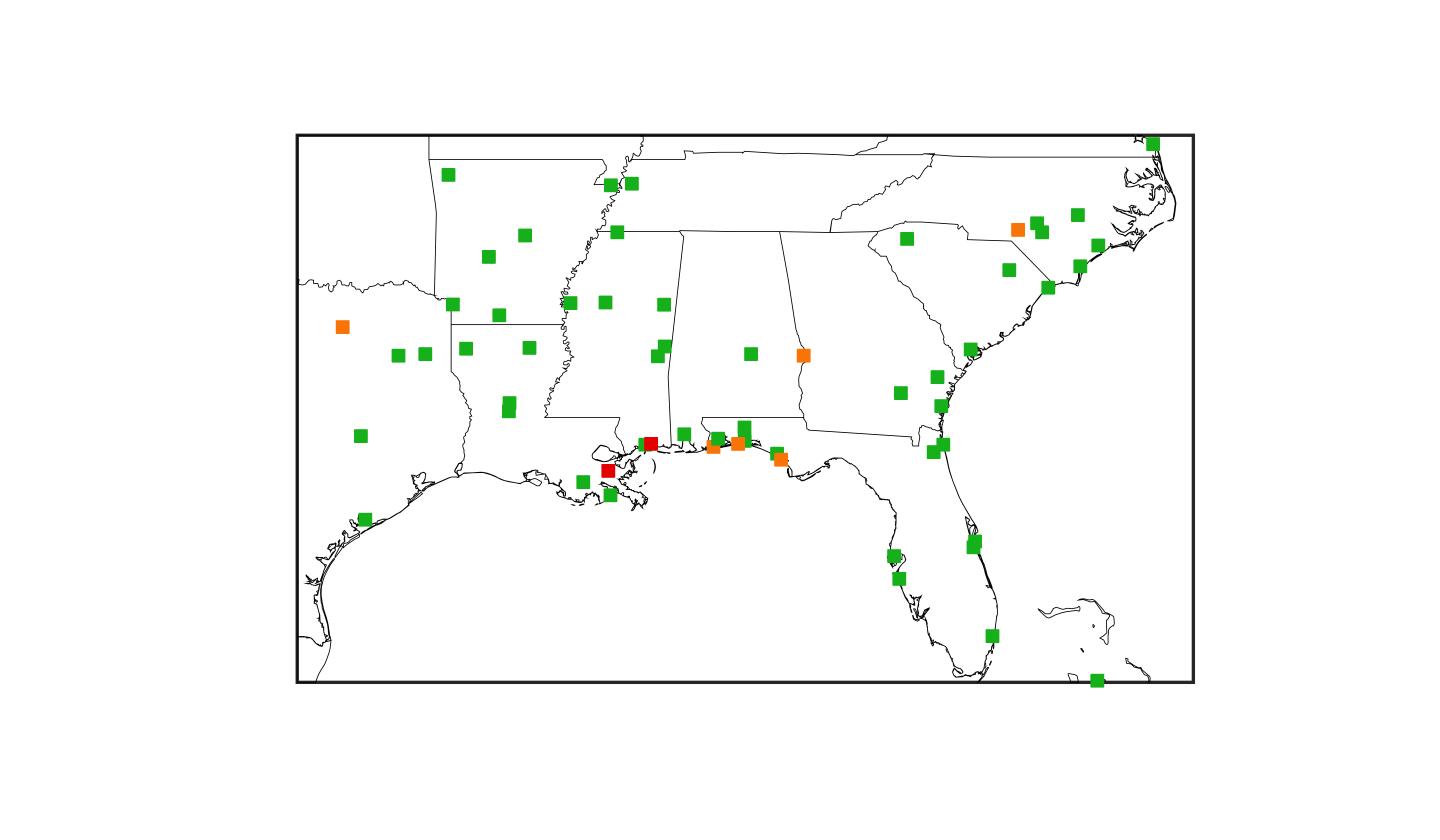 Most everyone knows that humid heat is harder to handle than the “dry” kind. And recently, some scientists have projected that later in the century, in parts of the tropics and subtropics, warming climate could cause combined heat and humidity to reach levels rarely if ever experienced before by humans. Such conditions would ravage economies, and possibly even surpass the physiological limits of human survival.

According to a new study, the projections are wrong: such conditions are already appearing. The study identifies thousands of previously rare or unprecedented bouts of extreme heat and humidity in Asia, Africa, Australia, South America and North America, including in the U.S. Gulf Coast region. Along the Persian Gulf, researchers spotted more than a dozen recent brief outbreaks surpassing the theoretical human survivability limit. The outbreaks have so far been confined to localized areas and lasted just hours, but they are increasing in frequency and intensity, say the authors. The study appears this week in the journal Science Advances.

“Previous studies projected that this would happen several decades from now, but this shows it’s happening right now,” said lead author Colin Raymond, who did the research as a PhD. student at Columbia University’s Lamont-Doherty Earth Observatory. “The times these events last will increase, and the areas they affect will grow in direct correlation with global warming.”

Analyzing data from weather stations from 1979 to 2017, the authors found that extreme heat/humidity combinations doubled over the study period. Repeated incidents appeared in much of India, Bangladesh and Pakistan; northwestern Australia; and along the coasts of the Red Sea and Mexico’s Gulf of California. The highest, potentially fatal, readings, were spotted 14 times in the cities of Dhahran/Damman, Saudi Arabia; Doha, Qatar; and Ras Al Khaimah, United Arab Emirates, which have combined populations of over 3 million. Parts of southeast Asia, southern China, subtropical Africa and the Caribbean were also hit.

The southeastern United States saw extreme conditions dozens of times, mainly near the Gulf Coast in east Texas, Louisiana, Mississippi, Alabama and the Florida Panhandle. The worst spots: New Orleans and Biloxi, Miss. Such conditions also reached inland into Arkansas and along the southeastern coastal plain.

Not surprisingly, incidents tended to cluster on coastlines along confined seas, gulfs and straits, where evaporating seawater provides abundant moisture to be sucked up by hot air. In some areas further inland, moisture-laden monsoon winds or wide areas of crop irrigation appear to play the same role.

Prior climate studies failed to recognize most past incidents because climate researchers usually look at averages of heat and humidity measured over large areas and over several hours at a time. Raymond and his colleagues instead drilled directly into hourly data from 7,877 individual weather stations, allowing them to pinpoint shorter-lived bouts affecting smaller areas.

Humidity worsens the effects of heat because humans cool their bodies by sweating; water expelled through the skin removes excess body heat, and when it evaporates, it carries that heat away. The process works nicely in deserts, but less well in humid regions, where the air is already too laden with moisture to take on much more. Evaporation of sweat slows. In the most extreme instances, it could stop. In that case, unless one can retreat to an air-conditioned room, the body’s core heats beyond its narrow survivable range, and organs begin to fail. Even a strong, physically fit person resting in the shade with no clothes and unlimited access to drinking water would die within hours.

Meteorologists measure the heat/humidity effect on the so-called “wet bulb” Centigrade scale; in the United States, these readings are often translated into “heat index” or “real-feel” Fahrenheit readings. Prior studies suggest that even the strongest, best-adapted people cannot carry out normal outdoor activities when the wet bulb hits 32 C, equivalent to a heat index of 132 F. Most others would crumble well before that. A reading of 35 — the peak briefly reached in the Persian Gulf cities — is considered the theoretical survivability limit. That translates roughly to a heat index of 160 F. (The heat index actually ends at 127 F, so these readings are literally off the charts.) “It’s hard to exaggerate the effects of anything that gets into the 30s,” said Raymond.

A heat wave that struck much of the United States last July maxed out at about 30C on the wet bulb, translating into heat indexes approaching 115 F in places; the highest was 122 F, in Baltimore, Md., and a similar wave hit in August. The waves paralyzed communities and led to at least a half-dozen deaths, including those of an air-conditioning technician in Phoenix, Az., and former National Football League lineman Mitch Petrus, who died in Arkansas while working outside.

It was a modest toll; heat-related illnesses already kill more U.S. residents than any other weather-related hazard including cold, hurricanes or floods. An investigation last year by the website InsideClimate News revealed that cases of heat stroke or heat exhaustion among U.S. troops on domestic bases grew 60 percent from 2008 to 2018. Seventeen soldiers died, almost all in the muggy U.S. Southeast. High-humidity heat waves in Russia and Europe, where far fewer people have air conditioning, have killed tens of thousands.

“We may be closer to a real tipping point on this than we think,” said Radley Horton, a Lamont-Doherty research scientist and coauthor of the paper. Horton coauthored a 2017 paper projecting that such conditions would not take hold until later in the century.

While air conditioning may blunt the effects in the United States and some other wealthy countries, there are limits. Before the new study, one of the previously highest heat/humidity events ever reported was in the Iranian city of Bandar Mahshahr, which almost reached a 35C wet-bulb reading on July 31, 2015. There were no known deaths; residents reported staying inside air-conditioned vehicles and buildings, and showering after brief sojourns outside. But Horton points out that if people are increasingly forced indoors for longer periods, farming, commerce and other activities could potentially grind to a halt, even in rich nations-a lesson already brought home by the collapse of economies in the face of the novel coronavirus.

In any case, many people in the poorer countries most at risk do not have electricity, never mind air conditioning. There, many rely on subsistence farming requiring daily outdoor heavy labor. These facts could make some of the most affected areas basically uninhabitable, says Horton.

Kristina Dahl, a climatologist at the Union of Concerned Scientists who led a study last year warning of increasing future heat and humidity in the United States, said the new paper shows “how close communities around the world are to the limits.” She added that some localities may already be seeing conditions worse than the study suggests, because weather stations do not necessarily pick up hot spots in dense city neighborhoods built with heat-trapping concrete and pavement.

Steven Sherwood, a climatologist at the Australia’s University of New South Wales, said, “These measurements imply that some areas of Earth are much closer than expected to attaining sustained intolerable heat. It was previously believed we had a much larger margin of safety.”

The study was coauthored by Tom Matthews, a lecturer in climate science at Loughborough University in the United Kingdom. Colin Raymond is now a postdoctoral researcher at NASA’s Jet Propulsion Laboratory.

Copies of the embargoed paper are available to registered journalists from the AAAS Office of Public Programs. [email protected] or 202-326-6440