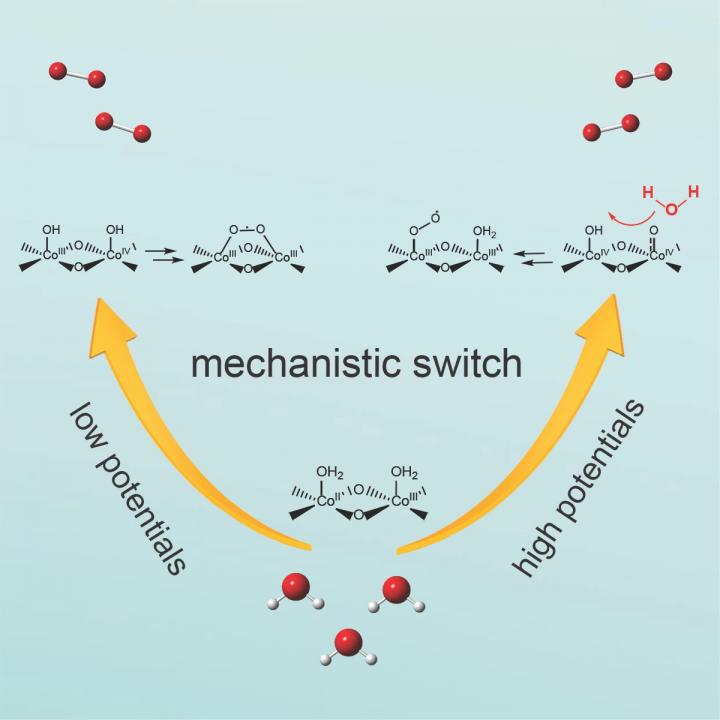 The findings show that in this materials class, an electrocatalyst for this reaction should be chosen, or optimized, depending on the potential regime in which it is expected to operate in a reactor. In other words, a given catalyst may be particularly efficient in promoting one mechanism, but not the other.

“What surprised us was how steeply the switch occurs from one mechanistic regime to another with applied potential,” said Boston College Professor of Chemistry Dunwei Wang, a lead author of the report. “Only about 100 mV are necessary to toggle between the two mechanisms. It is a reminder of how sensitive reaction mechanisms are. More broadly, the facile switch may be another indication of how photosynthesis can adapt to changes in reaction environment for optimized performance.”

Researchers have been working to split water into molecular hydrogen and oxygen in an effort to provide abundant renewable energy in the form of transportable and storable hydrogen gas. The splitting can be accomplished with electrocatalysis, a process in which the hydrogen and oxygen evolution reactions occur in spatially separated compartments on electrodes. That makes electrocatalysis a highly promising means for producing clean hydrogen gas.

However, the oxygen evolution reaction (OER) is slow, said Wang. As a result, the rate of the overall water splitting reaction is limited by the sluggish OER. The reaction needs to be facilitated by catalysts, that is, materials that promote the reaction without being themselves consumed in the process. To date, economically viable electrocatalysts for the promotion of the oxygen evolution reaction have not been developed yet. Wang and his colleagues focused on the OER in promising electrocatalysts in an effort to better understand the reaction processes and use those insights to design more efficient and stable electrocatalysts for this reaction.

They focused on the reaction in a class of electrocatalysts that are based on oxides of cobalt, a cheap and earth-abundant material, attributes that would translate efficiently to use on an industrial scale, Wang said.

In the last decade, various cobalt-oxide-based electrocatalysts have emerged as promising candidates for promoting the OER. In a collaboration with colleagues at Yale University, Wang and his team studied the OER on two types of cobalt-oxide electrocatalysts with electrochemical techniques, infrared spectroscopy, and density functional theory.

Wang said the team controlled the concentration of water by using water-in-salt electrolytes, which feature a concentration of salt that is approximately ten times higher than that of seawater. As a result, the researchers could control the activity of water by adjusting the amount of salt in the electrolyte. They monitored how the rate of the reaction responded to different concentrations of water. This revealed the mechanism of the OER on cobalt-based electrocatalysts, Wang said. Co-author and BC Associate Professor of Chemistry Matthias Waegele and his research team used infrared spectroscopy, which relies on the interaction of infrared light with molecules, to detect reaction intermediates of the OER under operating conditions.

They were able to detect a key reaction intermediate, which was predicted by the calculations by Yale chemist Victor Batista and his research group. Gary Brudvig, an inorganic chemist at Yale, also advised the team during the project.

Wang said the team wanted to look closely at the oxygen evolution reaction, particularly the characteristic that it is a step-by-step process, not a single event. Water contains only one oxygen atom. The product of the OER is molecular oxygen, which contains two oxygen atoms. Therefore, during the OER an oxygen-oxygen bond is formed, he noted.

Wang said researchers in this field have focused on two central questions: how does this oxygen bond form and in what step? Two principal mechanisms have been proposed in prior studies, however researchers had yet to resolve under what experimental conditions — temperature, or applied electrode potential, for instance — the oxygen-oxygen bond forms and which of the mechanisms is the dominant one.

Wang and his colleagues decided to look closely at how the applied electrode potential dictates the mechanism of the oxygen-oxygen bond formation step since reactions in electrocatalysis are driven by an electric potential that is applied to the catalyst.

The findings suggest that the mechanistic switch might be general for oxide-based electrocatalysts, Wang said.

“We are very interested in learning if this observation also applied to other promising electrocatalysts,” he said. “In particular, we are currently working on catalysts with atomically defined active centers. In contrast to the cobalt-based electrocatalysts, whose atomic structure at the active center remains unresolved, our new study platform contains catalytic centers that are atomically well-defined. It will be very interesting to see if the potential-induced mechanistic switch also occurs on those catalysts.”