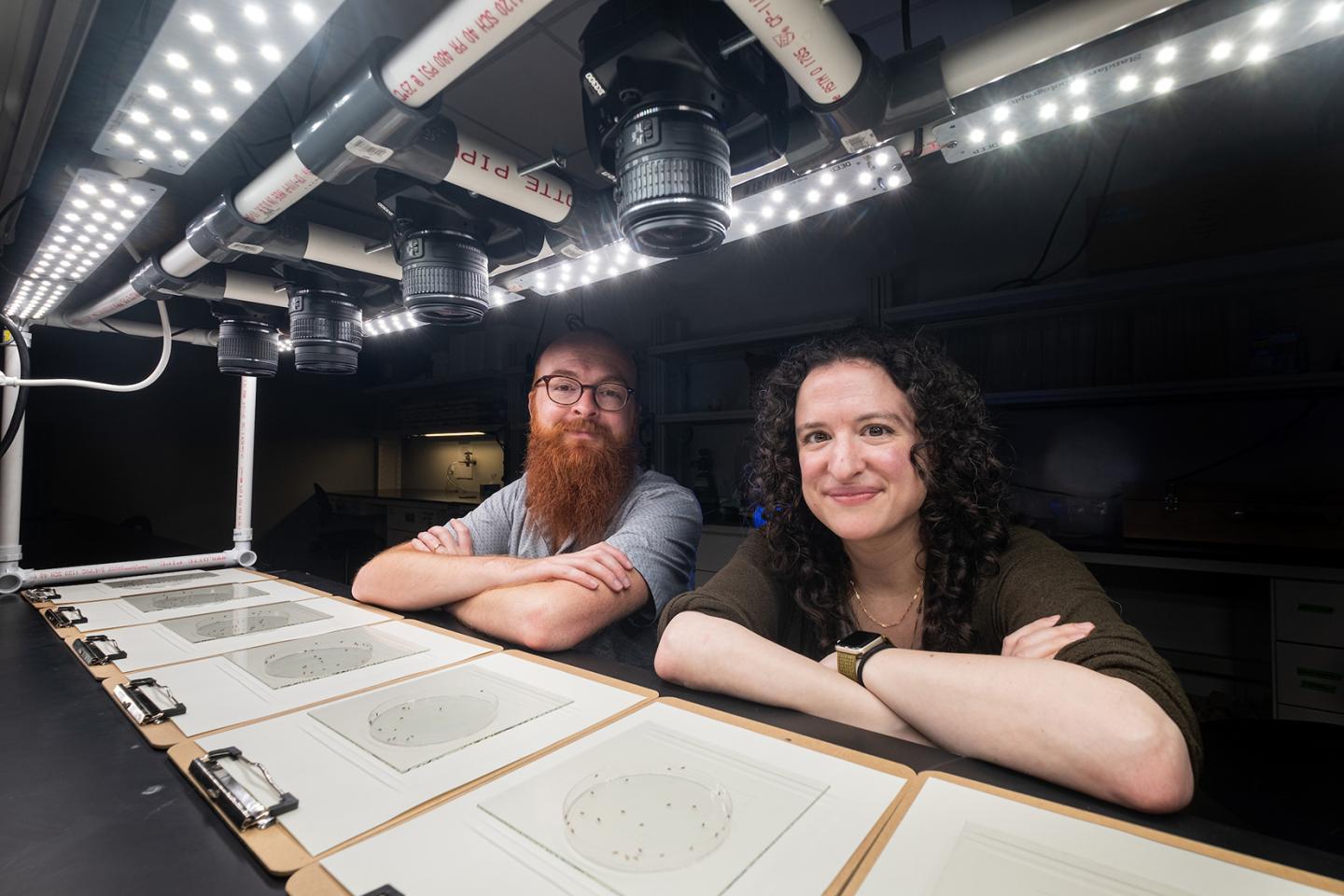 HOUSTON – (June 7, 2021) – If identical versions of 20 people lived out their lives in dozens of different worlds, would the same people be popular in each world?

If you substitute “fruit flies” for “people” in that question, you have a fair description of a Rice University study showing that the evolution of social structures and the positions of individuals within those structures are based partly on genetics.

Cloned fruit flies played a starring role in the study that researchers jokingly likened to “The Truman Show,” with video cameras observing how the flies behaved in a controlled environment.

In the study published online this week in Nature Communications, Rice bioscientists Eric Wice and Julia Saltz measured the social interactions between individual flies in 98 genetically identical groups. Each group contained 20 clones. The 20 differed from one another genetically, but the same clones were included in each of the 98 groups, which lived in separate enclosures under different environmental conditions.

Wice and Saltz found the same clones occupied the same social positions in each enclosed “world,” regardless of variation in living conditions.

“Social structure varies tremendously across the animal world, and the big question we’re interested in is ‘How did this variation evolve?'” said Saltz, associate professor of biosciences at Rice. “For evolution to occur, social structure must be heritable, and we showed that it is.”

Wice, a Ph.D. student in Saltz’s lab, said even though genetic variation explained just part the variation in flies’ social network positions, the heritability estimates that he and Saltz discovered are enough to fuel evolutionary change.

“We kind of integrated those things simultaneously to see how the structure of social groups will evolve and how it could potentially respond to selection,” Wice said.

Wice said the study found the amount of variation in social position that was explained by genetics “was on the order of like 2.4% to 16.6%.” And given that virtually all living creatures exhibit some form of social organization, the researchers’ findings could apply to species as varied as humans and bacteria, Wice said.

Some studies have explored whether human popularity might also be partly explained by genetics, Saltz said. But she added it is essentially impossible to design an empirical test.

“The best way to do that would be to get identical twins, and ‘Truman Show’ them,” she said, referring to the 1998 film in which the title character unwittingly lives in a controlled environment as part of a reality TV show. “You’d put one twin in one Truman Show bubble and the other twin in the other Truman Show bubble, and then see if they end up having the same identical-twin friends.”

In essence, that describes the experiment she and Wice conducted with the flies.

“Any two genotypes in our sample are as closely related genetically as two randomly chosen people,” Wice said. “But we can essentially make photocopies of each one of the flies and test, basically, the identical twins over and over.”

And because Wice gathered data on social interactions by videotaping flies in each enclosure, running the experiment was a lot like producing 98 simultaneous Truman Shows, but “with 20 Trumans in each show,” Wice said.

Positions within social networks were measured in five ways based on thousands of interactions between flies that were tallied and cataloged by computer software that “watched” dozens of hours of video of the 98 groups. Though the word “popularity” doesn’t appear in the paper, Saltz said it’s apt because some of the key parameters measured were equivalent to “how many friends you have and whether your friends are friends with each other or not.”

Remarkably, Wice and Saltz found that social position within networks remained the same, even when they varied the environment by changing the quality of food in the enclosures. In some, food contained more protein and in others more carbohydrates. In other instances, flies had fewer available calories. In all, there were five types of food, and roughly 20 groups of flies living on each type.

“Our findings show that we expect social structure to evolve differently in different nutritional environments,” Wice said. “That’s significant, but further research is needed to determine what kind of changes arise from nutritional differences.”

Ultimately, Wice and Saltz would like to know more about the ways that nutrition, aggressive behavior and other factors influence the evolution of social structure.

“What creates social structure?” Saltz said. “Group structures are inherently emergent properties of many different individuals, and there must be some underlying principles that shape the evolution of those structures.”

The fact that an individual’s position within a social network is dependent on the behavior of other individuals complicates that study of evolutionary social structure, Wice said, noting that some of the tools used in their analysis did not exist when Wice began Ph.D. studies five years ago.

“It’s not independent data, and that violates a lot of statistical tests and assumptions,” Wice said. “The tools are improving all the time, and it wouldn’t surprise me if new tools came out in the next five years that will allow us and learn even more from the data we’re collecting today.”

This research was supported by the National Science Foundation (1856577), a Rosemary Grant from the Society for the Study of Evolution and the Houston Livestock Show and Rodeo.

CAPTION: Rice University bioscientists Eric Wice (left) and Julia Saltz found a genetic basis for social popularity by studying the positions fruit flies occupy within social networks. They used cameras to record the social interactions of 98 genetically identical groups of fruit flies living under different conditions and found the same clones occupied the same positions of social popularity in each case, even when they inhabited enclosures with different living conditions. (Photo by Jeff Fitlow/Rice University)