Polyoxometalate-based coordination frameworks for CH4 generation in photoreduction of CO2 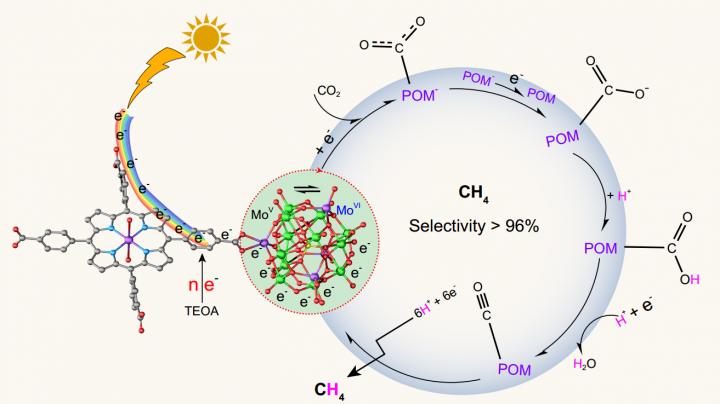 Excessive CO2 discharge derived from the continuous burning of fossil fuels has caused global warming and environmental issues. Artificial conversion of excess CO2 into serviceable energy product is an important pathway to achieve sustainable development. Solar-driven photocatalytic reduction of CO2 to carbon-neutral fuels (CO, CH4) and/or value-added chemicals (HCOOH, CH3OH) affords a feasible strategy for the aforesaid conversion. The implementation of this reaction can mitigate the greenhouse effect and energy crisis simultaneously. However, the structural activation process of CO2 molecule is particularly difficult because of its intrinsically chemical inertness and high C=O bond cleavage enthalpy. In order to circumvent the highly negative equilibrium potential (versus NHE) for thermodynamically unfavourable CO2* – intermediate, proton-assisted multiple electron reductive products including chemicals and/or hydrocarbon are commonly obtained so as to lower the activation energy of photocatalytic CO2 conversion. Even so, the formation of high-order proton and electron transferring products still needs to surmount considerable kinetic barrier, and the competitive H2 evolution further increase the difficulty for getting the aiming product selectively. For instance, the photosynthesis of CH4, one kind of most desirable and valuable hydrocarbon fuel in photoreaction system, has been a grand challenge, since the accomplishment of eight-electron transport process requires the photocatalyst to offer both strong reducing capability and sufficient electrons theoretically.

Researchers conceived that polyoxometalate (POM)-based coordination frameworks (POMCFs), with well-known structural stability and favorable catalytic performance, are probably more beneficial to execute photocatalytic reduction of CO2 due to the synergistic effect originated from the integration of POM and MCF. In particular, the Zn-ε-Keggin cluster of PMo12 “electron sponges” family, including eight MoV atoms, can behave as a strong reductive component and contribute eight electrons theoretically. In addition, the Zn-ε-Keggin, a tetrahedral node, is formed by four-trapped Zn(II) locating in ε-Keggin (PMo12). Compared with most anionic POMs, the ε-Keggin modified with metal Zn becomes a cationic cluster, which is favorable for coordination with organic ligands. Consequently, if the reductive POM cluster and porphyrin derivative can be employed to fabricate POMCF, having both the visible-light harvesting and photo-excited electron migration, that would be a good strategy towards selectively photoreducing CO2 to multielectron reductive products.

Therefore, we developed two POMCFs, NNU-13 and NNU-14, fabricated with reductive Zn-ε-Keggin cluster and visible-light responsive TCPP linker. These POMCFs exhibit high photocatalytic CH4 selectivity (> 96%) and activity that have far surpassed many MCF-based photocatalysts. Theoretical calculations revealed that the photo-generated carriers of VB and CB are mostly distributed on TCPP group and Zn-ε-Keggin cluster, respectively. The photo-excited electrons more easily flow to POM port by efficient intercoupling between reductive Zn-ε-Keggin unit and TCPP linker. Noted that the introduction of POM building blocks with potent reducing ability not only endows NNU-13 and NNU-14 with favorable structural rigidity, but also it indeed facilitates the photocatalytic selectivity of CH4 by theoretically delivering adequate electrons to accomplish the eight-electron reduction of the CO2 molecule. We expect such a feasible approach, assembling strong reducing component into visible-light sensitized photocatalyst architecture, can ignite research enthusiasm towards the construction of efficient POMCFs photocatalysts for highly selective reduction of CO2 to CH4 or other high-valued hydrocarbons.