WASHINGTON—In urban areas across the U.S., low-income neighborhoods and communities of color experience an average of 28% more nitrogen dioxide (NO2) pollution than higher-income and majority-white neighborhoods. The disparity is driven primarily by proximity to trucking routes on major roadways, where diesel trucks are emitters of NO2 and other air pollutants. 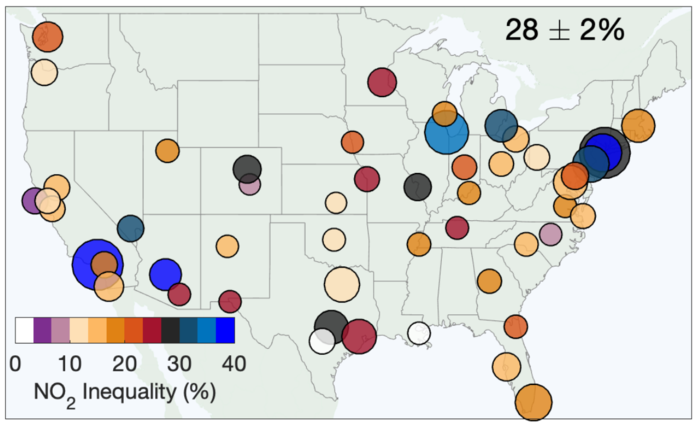 WASHINGTON—In urban areas across the U.S., low-income neighborhoods and communities of color experience an average of 28% more nitrogen dioxide (NO2) pollution than higher-income and majority-white neighborhoods. The disparity is driven primarily by proximity to trucking routes on major roadways, where diesel trucks are emitters of NO2 and other air pollutants.

Nitrogen dioxide is a common air pollutant that can cause a range of health problems, such as chronic respiratory illness and asthma. But it can be difficult to trace.

A new study used high-resolution air pollution data measured with satellites to track NO2 for nearly two years in major cities across the U.S. The researchers then paired the pollution data with both demographic data and metrics that analyze the degree of racial segregation in a community.

Cities with bigger populations tended to have larger disparities in NO2 pollution between low-income neighborhoods of color and high-income white neighborhoods, according to the study. Phoenix, Los Angeles and Newark, N.J., have the highest NO2 inequalities, all with a discrepancy in NO2 exposure of over 40%.

Both commuter traffic and heavy-duty trucks contribute NO2 and other pollutants, but diesel trucks are the dominant source, contributing on average up to half of a city’s NO2 despite being at most 5% of traffic. Because diesel trucks also emit other harmful gases and particulates, changes in NO2 are also thought to reflect exposure to other pollutants as well.

The findings are detailed in the AGU journal Geophysical Research Letters, which publishes high-impact, short-format reports with immediate implications spanning all Earth and space sciences.

“One of the novel things we looked at was the integration of segregation metrics and air quality. Previously, we had been limited in our ability to address air pollution inequality, but with improvements in satellite resolution we are now able to get spatially and temporally continuous data at finer resolutions within cities,” said Angelique Demetillo, an atmospheric chemist at the University of Virginia and lead author of the study.

Measuring pollutants like NO2 is difficult to do at a scale that’s useful to local policymakers. While previous studies have shown disparities in air quality, the new findings offer near-daily pollution data at small scales, providing important quantitative information policymakers can use to guide zoning and public health and that can reflect the lived experience of community members.

The new study found a 60% drop in heavy trucking on weekends results in a 40% decrease in air pollution inequality. That can point policymakers to a clear emissions-reducing target.

“In terms of environmental justice, one of the things we have lacked is these observations across an entire city that also have temporal variability that we can use to understand the sources [of pollution],” said Sally Pusede, an atmospheric chemist at the University of Virginia who co-authored the study.

“We have these new data and methodologies that continue to show us what we already know through experience, but in the U.S., it’s [quantitative] data that informs policy,” said Regan Patterson, a transportation and public health expert at the Congressional Black Caucus Foundation.

Transitioning to electric heavy-duty trucks could be one way of reducing pollution exposure in neighborhoods close to highways. California already has a mandate of doing this by 2045. But, Pusede pointed out, while emissions from diesel trucks are the biggest driver of exposure inequality, other pollution sources contribute to the problem. “Even if we eliminated emissions from trucking, we would still see inequalities present because there are other sources of inequality.”

Patterson said over the long term, transformative changes are needed to truly begin to remove NO2 pollution disparity. “How do you rectify the inequities that have literally been built into the environment, where certain groups are more likely to be adjacent to major roadways?” she asked.

Both Patterson and Pusede referenced a bill in the new infrastructure package aimed at physically reconnecting communities by removing freeways as a necessary step toward equalizing air quality. More immediately, Demetillo hoped her study and studies like it will help put air-quality information into the hands of community members.

“I see this as just the beginning. There are a lot of potential end-user applications, like people in different cities using this information to help them make decisions about how to go about their day. For policymakers, this could be a new way to plan mitigation solutions or to monitor how well those mitigation strategies are playing out,” Demetillo said.

This research study is published with open access and is freely available. Download a PDF copy of the paper here. Neither the paper nor this press release is under embargo.