Despite stereotypes to the contrary, many older women have active sex lives into their 70s, a new poll shows. But health concerns, including menopause symptoms, often get in the way of intimacy, according to the new results from the University of Michigan National Poll on Healthy Aging. 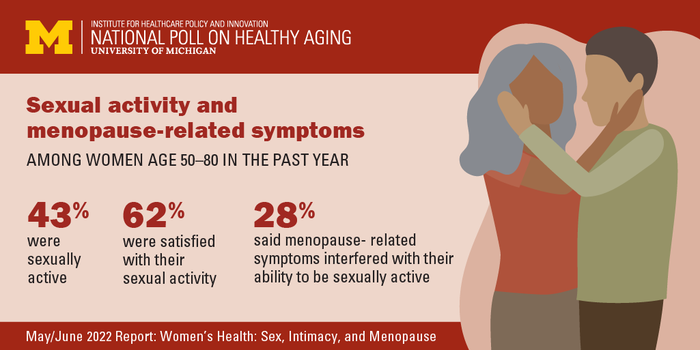 Despite stereotypes to the contrary, many older women have active sex lives into their 70s, a new poll shows. But health concerns, including menopause symptoms, often get in the way of intimacy, according to the new results from the University of Michigan National Poll on Healthy Aging.

Even so, only 44% of women with menopause symptoms have discussed treatment with their health care provider. Among those who did receive treatment, 88% felt their symptoms were managed somewhat or very well.

Meanwhile, women over 50 who have other health issues, or who say their mental or physical health are fair or poor self-reported , were more likely to report less satisfaction with their sex lives. And 1 in 4 women over 50 said their partner’s health interfered with their own ability to be sexually active.

The poll is based at the U-M Institute for Healthcare Policy and Innovation and supported by AARP and Michigan Medicine, the University of Michigan’s academic medical center.

Daniel Morgan, M.D., a professor of obstetrics and gynecology at Michigan Medicine who studies and works to improve the quality of OB/Gyn care, worked with the poll team on the report.

“Women over 50 who experience menopause symptoms or other health concerns that interfere with sexual activity should absolutely speak up to their health care providers and find out what their options might be,” said Morgan. “Often women and their partners overlook the intertwined nature of physical and mental health, and sexual health and the ways menopause-related symptoms can have an impact on sexual activity. It’s important to understand what your treatment options are, and which ones might be appropriate for your needs and goals.”

Menopause symptoms affected 84% of the women in the past year, with 35% saying that they’d experienced four or more symptoms from a list of 8 symptoms. Sleep problems (56%) and weight gain or slow metabolism (55%) were the most common, followed closely by reduced sexual drive (48%).  Hot flashes and night sweats affected 41%, mood swings and irritability were reported by 38%, urinary tract infections by 16%, and smaller percentages reported other symptoms.

As expected, women between the ages of 50 and 64 were more likely to report menopause symptoms than those age 65 to 80, but 78% of the older group said they still experienced at least one symptom.

“In all, 28% of women over 50 told us that their menopause symptoms interfere with their ability to be sexually active, and there was not a major difference between the two age groups,” she said. “Meanwhile, other types of health problems interfered with the sex lives of 17% of these women. Women reporting menopause symptoms or health problems were  less likely than other women to say their satisfied with their level of sexual activity.”

Just over a third (35%) of women who said their mental health was fair or poor said they were satisfied with their sexual activity, compared with 65% of those reporting better mental health.

“We’ve found in previous AARP research that women don’t know as much as they should about the conditions leading up to menopause and healthcare providers are not proactive in initiating the conversation about this life transition,” said Teresa A. Keenan, Ph.D., Director of Health Security Research, AARP Research.  “As this new report notes, it’s important for women to feel empowered to take control of their own health and to initiate discussions with their health care provider, including discussions around sex and intimacy, to contemplate potential treatment options. With many years of post-menopausal life ahead, their concerns are too important to ignore.”

The poll report is based on findings from a nationally representative survey conducted by NORC at the University of Chicago for IHPI, and administered online and via phone in January and February 2022 among 1,206 women age 50–80. The sample was subsequently weighted to reflect the U.S. population. Read past National Poll on Healthy Aging reports and about the poll methodology.