Those who drink to boost their mood, to relieve stress, boredom or pain may be more at risk in pandemic – but “social drinkers” should watch intake too 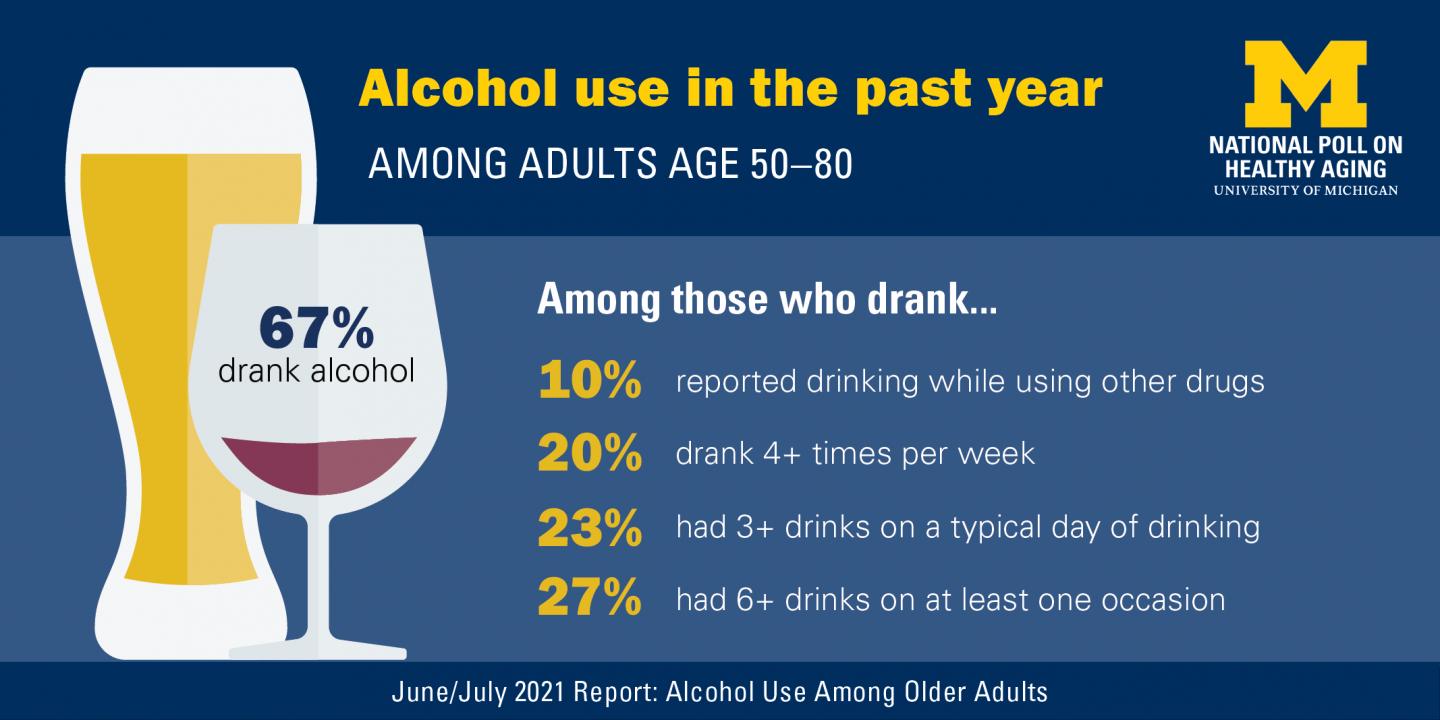 As many older adults get back to normal life across the United States thanks to high rates of vaccination and lower COVID-19 activity, a new poll suggests many should watch their alcohol intake.

In all, 23% of adults over 50 who drink alcohol reported that they routinely had three or more drinks in one sitting, according to new findings from the National Poll on Healthy Aging. And 10% of adults who drink use other drugs while drinking, including marijuana or prescription medications that can interact with alcohol in risky ways.

The poll asked adults age 50 to 80 to reflect on their drinking habits shortly before the pandemic and during its first ten months. Routinely having three or more alcoholic drinks on any day they drink, and occasional binge drinking, are both considered signs of problematic drinking in any adult.

While overall only 14% of older adults who drink alcohol said their drinking increased during the first ten months of the pandemic, that percentage was much higher among the minority of older adults who said they drink as part of their routine, to boost their mood or to relax, or to cope with boredom, stress or pain. A third to half of such adults reported drinking more in the past year. Those who reported feeling isolated or lonely were also more likely to say they’d increased alcohol intake.

Among older adults who drink, 10% said there was a time when they thought they were drinking too much during the pandemic, though few of them had sought help.

Meanwhile, half of older adults say they mainly drink for social reasons. Members of this group were more likely to say they decreased their drinking in 2020. This suggests that as social interactions increase during the new phase of the pandemic, their alcohol consumption may rise.

The poll is based at the University of Michigan’s Institute for Healthcare Policy and Innovation and receives support from AARP and Michigan Medicine, U-M’s academic medical center. It draws from the answers of a national sample of more than 2,000 adults aged 50 to 80 to a poll in late January, when COVID-19 case rates were high across the nation and vaccination of older adults had just begun. One-third of the respondents said they did not drink alcohol in the past year.

“Even before the pandemic, heavier and more risky drinking habits were increasing in older adults at a faster rate than among younger adults,” said Anne Fernandez, Ph.D., a psychologist in the U-M Department of Psychiatry who specializes in studying alcohol use and who worked with the poll team on the report.

“While not every older adult who drank more during the past year may have gone from non-risky to risky drinking, but the overall level of drinking, and the potential for interaction with other substances, is very concerning,” she said. “As we all toast the end of the worst part of the pandemic in our country, it’s important to address or prevent problematic drinking of all kinds.”

Older adults may find that the same amount of alcohol that they consumed with a meal or at a social occasion in the past will affect them differently now. That could include balance issues that could lead to falls and other injuries. Long-term drinking habits can accelerate the immune system decline that typically comes with age, and are associated with more memory loss.

“We get especially concerned when older adults are drinking multiple drinks at a sitting, so the 20% of older men who said they drink three to four alcoholic drinks on a typical day of drinking is concerning,” she says. “And 27% of those who drink said that at least once in the past year, they had had six or more drinks – which is a ‘binge’ level of alcohol consumption that is risky at any age, but more so as we age.”

Combining alcohol with substances that act on the central nervous system can pose special risks. Many older adults may not realize that they should not drink alcohol, or strictly limit their intake, if they are taking opioid pain medications, sleeping aids, sedatives, tranquilizers and medications for depression or other mental health concerns. As cannabis use for medical and recreational reasons rises in older adults, Fernandez says special attention is needed to this kind of interaction.

People with heart issues, diabetes, liver disease or other chronic illness should also reduce alcohol use because of the impact on their bodies.

Help for cutting back on drinking

Research has proven that there are effective ways for older adults – and adults of any age – to cut back on their drinking, or stop drinking altogether.

Counseling from professional therapists, peer support and recovery groups, and medication are all available treatments for alcohol use disorder or alcohol addiction, and for those who don’t meet the criteria for that condition but want to cut back. Older adults can get referrals to such services, and potentially access coverage from their insurance, by talking to their regular health care provider.

In all, 27% of the older adults polled said they had been concerned about their own alcohol use at some time in their life – but only one in five of these who had been concerned had ever sought professional help for their drinking.

“Heavier drinking among older adults has been on the rise for several decades. Because unhealthy alcohol behaviors become more problematic as we age, it’s important to seek treatment if you are worried about your alcohol consumption,” said Alison Bryant, Ph.D., senior vice president of research for AARP.

For more about safe drinking and the effects of alcohol on health, see the National Institutes of Health’s Rethinking Drinking site. To find help for alcohol use issues for yourself or others, including online counseling, visit the Alcohol Treatment Navigator.

The National Poll on Healthy Aging results are based on responses from a nationally representative sample of 2,074 adults aged 50 to 80 who answered a wide range of questions online in January 2021. Questions were written, and data interpreted and compiled, by the IHPI team. Laptops and Internet access were provided to poll respondents who did not already have them. A full report of the findings and methodology is available at http://www.healthyagingpoll.org, along with past National Poll on Healthy Aging reports.