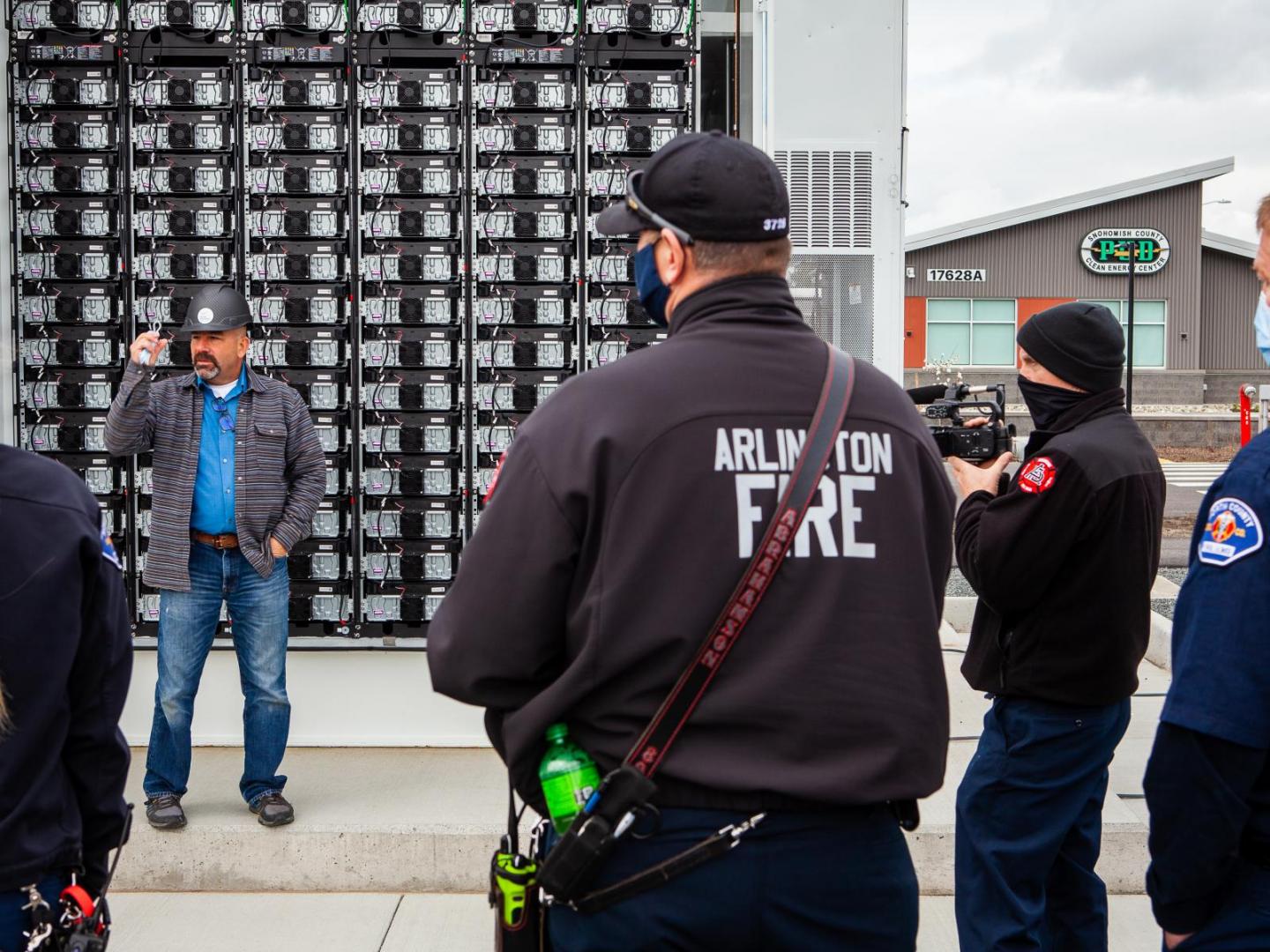 Supported by DOE’s Office of Electricity, IntelliVent is designed to be installed in cabinet-style battery enclosures, which are becoming common for stationary grid energy storage. IntelliVent responds to smoke, heat, or gas alarms in the battery enclosure and automatically opens cabinet doors to prevent buildup of flammable gases. The technology reduces the risk of explosions at battery installations, which can damage property or endanger lives. Firefighters and utility personnel are at particularly high risk in these hazardous situations.

When a lithium-ion battery reaches a critical temperature, the liquid electrolyte inside the battery can vaporize and release toxic, flammable gases including hydrogen, carbon monoxide, methane, and propylene. This process is called thermal runaway.

“Depending on the size of the cell, these gases can come out at very high volume, very quickly, and can lead to fire or even an explosion,” said Matthew Paiss, technical advisor for energy storage safety at PNNL and one of the inventors of IntelliVent.

“Protecting our critical workforce is a high priority,” said Imre Gyuk, director of the Office of Electricity’s Energy Storage Program. “The IntelliVent project works to address an important safety concern continuing to inhibit widespread adoption of energy storage for the grid. PNNL’s expertise in grid energy storage, fire safety and emergency response, and safety codes and standards position the team to bring this technology to fruition.”

Recent fires at battery storage facilities in Surprise, Arizona, and Liverpool, England, shined a light on the dangers these kinds of fires can present. The April 2019 incident in Arizona at an energy storage facility left four firefighters injured, two seriously. In September 2020, fire crews in Liverpool, England, were called to a 20 MW battery storage plant after an explosion had occurred to find a large grid battery system container on fire.

This safety technology is a welcome addition for firefighters and utility personnel.

“This is absolutely in the right direction, said Bobby Ruiz, the fire chief in Peoria, Arizona, whose firefighters were injured in the Surprise, Arizona, explosion. “Getting all doors open early before gas buildup will make the incident safer. It will also increase situational awareness by being able to see if the batteries are smoking or are on fire. And, if extinguishment is needed, we can direct the water right at the modules from a safe distance.”

“There are many similar battery enclosures operating today that could experience the exact same kind of failure,” added Paiss.

The Snohomish County Public Utility District’s new Arlington Microgrid and Clean Energy Center, in Everett, Washington, will be the first to install the safety technology when it retrofits a 1.2 MW battery with the IntelliVent system.

“No one likes the idea of being the first one to open the door on a suspicious battery,” said Scott Gibson, energy storage project manager for Snohomish PUD, who expects the new safety system to be installed this summer. “This is where IntelliVent comes in.”

The Arlington Microgrid and Clean Energy Center project, which is partially funded by the Washington State Department of Commerce’s Clean Energy Fund, will showcase the promise of grid-level energy storage.

“We want to demonstrate everything that can be done with energy storage and also understand how to get value from it,” said Gibson. “We know renewable energy is part of our future, but since renewable energy isn’t always available, we need a way to store it.”

Gibson calls it a “solar-plus-storage emergency generator with a day job.” During normal operating conditions the battery discharges power from the solar array to the grid. But during a natural disaster, the battery and solar array will disconnect from the main power grid to supply emergency power to the Arlington Microgrid and Clean Energy Center. The microgrid will keep a backup data center and support office running in case of an outage.

IntelliVent designers developed the versatile system to work with a variety of sensors. Further, its simple operation provides an early warning system for pushing the gases out. It is intended to reduce the risk of explosion, but due to limitations of the product standard, is not designed to NFPA-69 (Standard on Explosion Prevention Systems).

IntelliVent is available for low-cost, nonexclusive licensing as PNNL pursues broad and rapid adoption of this important safety technology.

Pacific Northwest National Laboratory draws on its distinguishing strengths in chemistry, Earth sciences, biology and data science to advance scientific knowledge and address challenges in sustainable energy and national security. Founded in 1965, PNNL is operated by Battelle for the U.S. Department of Energy’s Office of Science, which is the single largest supporter of basic research in the physical sciences in the United States. DOE’s Office of Science is working to address some of the most pressing challenges of our time. For more information, visit PNNL’s News Center. Follow us on Twitter, Facebook, LinkedIn.