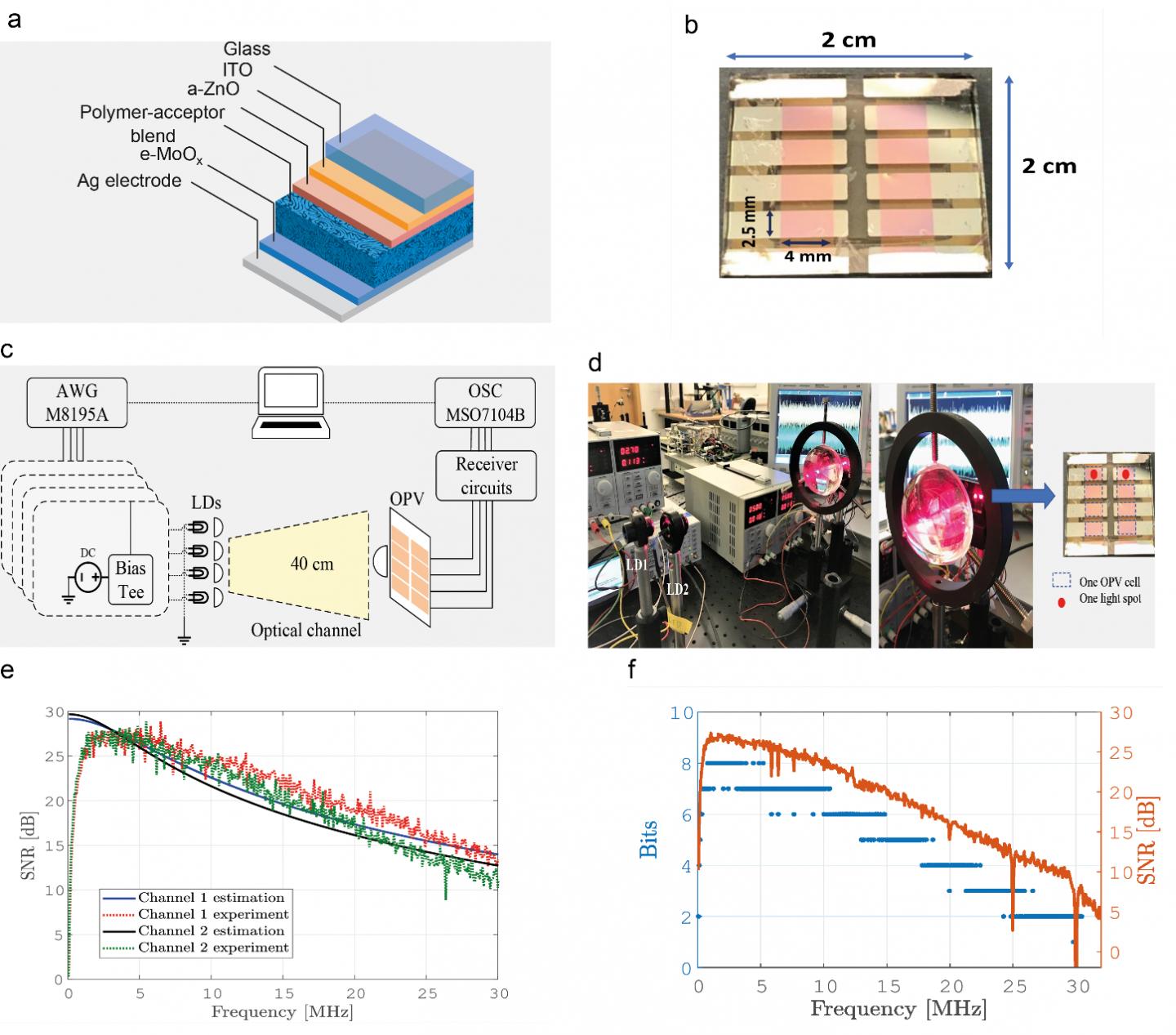 Around the world there are currently more than 18 billion internet-connected mobile devices. In the next 10 years, anticipated growth in the Internet of Things (IoT) and in machine-type communication in general, will lead to a world of hundreds of billions of data-connected objects. Such growth poses two very challenging problems:

Regular, manual charging of all mobile Internet-connected devices will not be feasible, and connection to the power-grid cannot be generally assumed. Therefore, many of these mobile devices will need to be able to harvest energy to become largely energy-autonomous.

The research, led by Professor Harald Haas from the Strathclyde LiFi Research and Development Centre, and Professors Ifor Samuel and Graham Turnbull at the St Andrews Organic Semiconductor Centre, makes an important step towards the future realization of self-powered data-connected devices.

The research teams showed that organic photovoltaics (OPVs), solar cells made from similar plastic-like materials to those used in OLED smartphone displays, are suitable for high-speed optical data receivers that can also harvest power. Using an optimized combination of organic semiconductor materials, stable OPVs were designed and fabricated for efficient power conversion of indoor lighting. A panel of 4 OPV cells was then used in an optical wireless communication experiment, receiving a data rate of 363 Mb/s from an array of 4 laser diodes (each laser transmitting a separate signal), while simultaneously harvesting 11 mW of optical power.

“Organic photovoltaics offers an excellent platform for indoor power harvesting for mobile devices. Their advantage over silicon is that the materials can be designed to achieve maximum quantum efficiency for typical LED lighting wavelengths. Combined with the data reception capability, this opens up a significant opportunity for self-powered Internet of Things devices.”

“Organic photovoltaic cells are very attractive because they are easily made and can be flexible, allowing mass integration into internet-connected devices. In addition, compared to inorganic detectors, OPVs have the potential to be significantly cheaper, which is a key driver to their large-scale commercial adoption.

Visible light communication provides unregulated, safe and vast resources to alleviate emerging wireless capacity bottlenecks. Of course, visible light can also provide energy. To achieve both objectives with a single device, new solar cells are needed. They must be capable of simultaneously harvesting energy and detecting data at high speeds. It is, therefore, essential to develop solar cells that have two key features: a) they exhibit a very large electrical bandwidth in the photovoltaic mode of operation, and b) have a large collection area to be able to collect a sufficient number of photons to achieve high signal-to-noise ratio (SNR) and harvest maximum energy from light. Regrettably, the two requirements are typically mutually exclusive because a large detector area results in a high capacitance and hence low electrical bandwidth.
In this research, we have overcome this fundamental limitation by using an array of OPV cells as a MIMO receiver to establish multiple parallel and independent data channels while being able to accumulate the harvested energies of all individual solar cells. To the best of our knowledge, this has never been shown before. This work therefore lays the foundation for the creation of a very large, massive MIMO solar cell receiver enabling hundreds and potentially thousands of individual data streams while using the huge collection area to harvest large amounts of energy from light (both data carrying and ambient light). It is imaginable to turn entire walls into a gigabit per second data detector while harvesting sufficient energy to power many distributed intelligent sensors, data processing and communication nodes.”